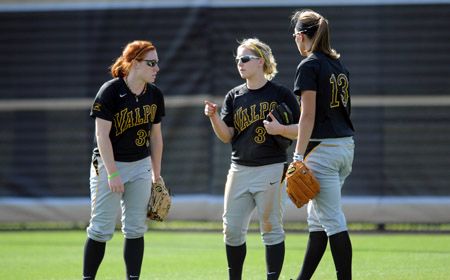 Previously: The Crusaders went 2-3 at Florida’s Lipton Invitational, earning victories over North Dakota State and Gardner-Webb, and then posted a 5-1 mark at the Rebel Spring Games, exiting the state of Florida on a five-game winning streak.  The IUPUI doubleheader will be Valpo’s first action in 11 days.

Following the Crusaders: Live stats for all six of this week’s contests will be available through www.valpoathletics.com.  In addition, a live audio broadcast of the Michigan State game can be heard online or in the Valpo area on 95.1 FM, WVUR.  A live chat for the doubleheader at IUPUI can also be accessed through the official Crusader website.

Series Notes: IUPUI - Valpo owns a slight 27-23 lead in the all-time series over the Jaguars, a former conference rival from the Mid-Con days.  Most recently, the Crusaders swept a twinbill in Valparaiso on Apr. 13, 2010, winning 2-1 and 4-0.
Michigan State - The Crusaders and Spartans have met just four times in program history, with MSU winning all four previous games, and this marks the first meeting between the two schools in Valpo.  Most recently, the Spartans won a doubleheader by 7-4 and 8-1 scores in East Lansing on May 3, 2007.
Detroit - Valpo owns the 20-17 advantage all-time over the Titans and is 8-1 against Detroit since joining the Horizon League.  The Crusaders set or tied numerous records in last year’s three-game sweep in Detroit on Apr. 2-3, winning the three games 10-0, 18-2 and 16-1.

A Rigorous Slate: The Crusaders will have a number of challenges on their hands in the pre-league portion of the 2011 season.  11 of Valpo’s first 13 games were against squads which won at least 30 games a year ago, with six of those games were against teams which advanced to the NCAA Tournament in 2010 as well.  Valpo also took on a pair of the nation’s top-10 teams for the first time ever.

Bringing Home the Hardware: For the first time in the modern era, the Crusader softball team earned a tournament championship by capturing Stetson’s Hatter Classic in late February.  Valpo got back-to-back homers from KC Boldt and Tori Brown in the second to take the lead for good in a 5-2 win over Bethune-Cookman in the championship game.

Run-Ruling All Comers: Valparaiso won 12 games via run rule last season, and has already run-ruled three opponents in its 12 victories this season, including an 11-2, five-inning win over Iowa State, the Crusaders’ first run-ruling of a BCS opponent in the modern era.  On the flip side, Valpo has not been run-ruled yet this year.

Doerffler On a Roll: Since moving to the second spot in Valpo’s batting order prior to the Robert Morris game, freshman infielder Angie Doerffler has been on fire at the plate.  Over the five-game stretch, Doerffler is 11-of-17 (.647) at the plate with three doubles, a triple, seven runs and five RBIs, helping the Crusaders to five victories.  Perhaps more impressively, Doerffler carries streaks of nine straight plate appearances reaching base and seven straight at-bats with hits into this week’s action.

Strickland Continues to Produce: Junior outfielder Sara Strickland also saw her role shift prior to the Robert Morris game, hitting in the three-hole for the first time in her career, and has hit .500 (9-of-18) with five runs scored, four RBIs, four doubles and four steals in the five games since.  On the season, Strickland is hitting .406 with 14 runs scored, 13 RBIs, 10 steals and eight doubles, and enters the week just one run shy of matching Valpo’s career record in the category.

Pitching Staff Posts Performances: Valpo’s pitchers stood out over the Crusaders’ action at the Rebel Spring Games, combining to surrender just 10 runs over their six games in Kissimmee, just seven of which were earned (1.23 ERA).  Junior Shaleigh Jansen posted a 0.46 ERA, surrendering just one earned run in 15.1 innings while going 2-0 with a save, while junior Sam McGee struck out 19 batters and earned two wins in her 18.1 innings of work.  Redshirt sophomore Amanda Bolton contributed as well, going six shutout innings to earn a win over Wagner in her first career start.