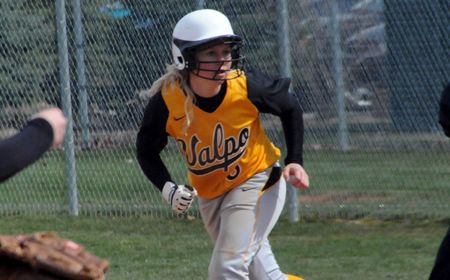 Valparaiso decisively swept a doubleheader at IUPUI Tuesday afternoon in Indianapolis, Ind., winning the opener 10-3 before taking the nightcap via run rule, 9-1 in six innings to extend its winning streak to seven games.  Junior Sara Strickland (Scottsdale, Ariz./Horizon) broke the Crusader record for career runs scored in the first inning of the second game, while freshman Angie Doerffler (Fort Wayne, Ind./Concordia Lutheran) set a mark for consecutive hits that ranks among the top-10 in NCAA history.

“The 11 days off (prior to today's games) gave us a good opportunity to work on some things we needed to work on,” said Crusader head coach Jordan Stevens.  “It's not easy coming back from that much time off, but we did a really nice job of executing our game plan today.  We felt it was important to get up on IUPUI early and we were able to do that both games.”

Strickland entered the week with 103 career runs scored, and tied Karen Korb's program record when she crossed the plate in the fifth inning of game one.  The junior then claimed the record outright by scoring a run in the opening inning of the second game, one of three runs Strickland scored in the nightcap.

“Sara's a leader for us on the field,” said Stevens.  “She brings a consistent effort day-in and day-out, both at the plate and defensively in the outfield.  She's been asked to produce in a couple of different spots in the order this year, and has done a nice job of adjusting to the three-spot.  She really helps make things happen for our offense.”

Meanwhile, Doerffler, who entered the day with hits in seven straight at-bats and having reached base in nine consecutive plate appearances, singled through the right side in the first inning of the opener and then blooped a single over the third baseman's head in the third to extend her streak to nine consecutive hits.  The nine straight hits is tied for ninth-most in NCAA Division I history.

Doerffler's one-out single in the first started the Crusaders on the right foot, as they eventually loaded the bases with two outs on back-to-back hit batsman.  Senior Sadie Conner (Washington, Ill./Washington) delivered a full-count single back through the middle to score Doerffler and senior KC Boldt (Red Wing, Minn./Red Wing) to give Valpo a 2-0 edge.  IUPUI cut the deficit in half with a run in the bottom of the first.

Doerffler would cross the plate again in the third after her leadoff single, coming home on a two-out single by junior Jordan Rutkowski (Alden, N.Y./Alden) to increase the lead to 3-1.  Freshman Amanda Wisniewski (Lake in the Hills, Ill./Huntley) added another run to the Crusader advantage in the fourth, drilling a solo homer to left field to make it 4-1 Valpo.

Strickland led off the fifth inning with a single up the middle and eventually came home on another RBI single by Conner, who later scored herself on an RBI single courtesy of junior Kelsey Phalen (Batavia, Ill./Batavia), giving the Crusaders a 6-1 edge.  Valpo added four more runs in the seventh inning as Phalen scored on an RBI single by Wisniewski, Doerffler delivered a two-RBI double down the left-field line to score Wisniewski and senior Jill Jacobson (Beecher, Ill./Beecher), and Strickland connected on an RBI base knock to score Doerffler.  IUPUI scored two runs in its last at-bat for the game's final margin.

Doerffler and Strickland both tallied three hits in the opener, while three other Crusaders also posted multi-hit games as Valpo totaled 15 base hits in the day's first game.  Doerffler also scored a trio of runs, while Conner led the way for Valpo with three RBIs.  Junior Alex Lagesse (Beecher, Ill./Beecher) earned the victory for the Crusaders, improving to 4-5 on the season, giving up just four hits and one run in her six innings of work, while Nicole Natter fell to 2-3 for IUPUI, surrendering three runs in three innings.

The Crusaders jumped all over the Jaguars in the second game, as Valpo's first six batters reached en route to a five-run opening frame.  Sophomore Hayley Bridwell (Lemont, Ill./Lemont) and Strickland sandwiched a Doerffler single with bunt singles, loading the bases right away, and Boldt worked a 3-2 walk to score Bridwell to open the scoring.  Rutkowski then knocked a single through the left side to drive in Doerffler, while Strickland scored on the same play thanks to a error by the Jaguars' left fielder.

A pitching change by IUPUI couldn't halt the Valpo momentum, as Conner singled right back up the middle to again load the bases.  After a fielder's choice forced the lead runner, sophomore Tori Brown (Harrison, Ohio/Harrison) and Wisniewski reached on back-to-back Jaguar errors on infield grounders, driving in Rutkowski and Conner, respectively, to give the Crusaders a quick 5-0 advantage.

Valpo added two more runs in the second, as Strickland and Boldt led off with back-to-back singles before Rutkowski drilled a hard grounder all the way to the wall in left-center for a two-RBI double, increasing the Crusader edge to 7-0.  The lead remained seven runs despite an IUPUI threat in the bottom of the third.  The Jaguars loaded the bases with one out before Conner snagged a hard-hit line drive and dove into third base to force the runner to complete the unassisted double play.

A pinch-hit home run by sophomore Jennifer Hermanson (Beecher, Ill./Beecher) to lead off the fifth put Valpo ahead eight runs and set up a potential run-rule victory, but the Jaguars kept the game alive in their half of the fifth with a successful first-and-third double steal with two outs, cutting the Crusader lead to 8-1.  But Valpo responded in the top of the sixth, as Strickland scored on an errant throw by the Jaguar catcher down to third base to again push the lead to eight runs, and this time junior Sam McGee (Bloomington, Minn./Jefferson) set IUPUI down in order to close the victory.

McGee improved to 7-3 on the season with her complete-game effort, surrendering just four hits and one run in her six innings.  Alicia Brewer took the loss for IUPUI (9-14), falling to 0-1 after failing to retire any of the five batters she faced.  Doerffler, Rutkowski and Strickland all picked up two hits apiece in the nightcap, while Strickland also scored three runs and Rutkowski drove in three.

“We just played well all-around today,” said Stevens.  “We swung the bats well, getting 26 hits, and made quick adjustments to a number of different pitchers they threw at us.  In the field, we played errorless ball both games, and on top of that, we got two good performances from our two starting pitchers.  It was a well-played day, and a good way to take momentum into our home games against Michigan State and Detroit to open Horizon League play this weekend.”

Valparaiso (14-10) opens the home campaign this Friday, March 25 at the Valparaiso University Softball Field with a single game against Big Ten foe Michigan State.  First pitch against the Spartans is slated for 4 p.m.