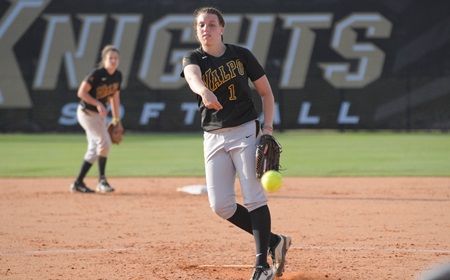 The first home game of the year, which featured the introduction of bleacher and chairback seating, a press box, batting cages down the left-field line, as well as numerous field improvements, was a milestone in multiple ways for the Crusaders.  The eight-game winning streak is tied for the third-longest string of victories in program history, just one game shy of matching the record winning streak of nine straight wins, accomplished both last season and in 1987.  Meanwhile, Valpo also snapped Michigan State's seven-game winning streak on Thursday and also recorded its first victory over the Spartans in five tries in program history.

Valpo got the scoring right away in its half of the first inning Thursday.  Sophomore Hayley Bridwell (Lemont, Ill./Lemont) led off with a grounder to short and used her speed to induce a rushed throw which resulted in an error.  Freshman Angie Doerffler (Fort Wayne, Ind./Concordia Lutheran) followed with a sharply-hit single through the right side, and junior Sara Strickland (Scottsdale, Ariz./Horizon) then legged out an infield single dribbled towards first base.

The Spartan first baseman then threw the ball away attempting to make the play on Strickland at first, allowing each of the runners to move up a base, scoring Bridwell.  Two batters later, junior Jordan Rutkowski (Alden, N.Y./Alden) lined a single into center field to drive in Doerffler, and a bobble in center field gave Strickland the opportunity to race home, spotting the Crusaders an early 3-0 advantage.

“Anytime we can get a Big Ten team to play us on our home field, we'll take it,” said Crusader head coach Jordan Stevens.  “We happened to be lucky that Michigan State was on its way to Illinois and was looking to pick up another game along the way, and we took advantage.    To get out early to the quick start, scoring three in the first, was big for us, especially against a team that might not have expected the right away from us.”

Valpo starting pitcher Sam McGee (Bloomington, Minn./Jefferson) kept the Spartans off the board in the first two innings thanks to recording timely outs.  McGee forced a pop-up with runners on the corners in the first, and then after giving up a single and double to start off the second, sandwiched a pair of strikeouts around another pop-out to keep MSU scoreless.  It looked like McGee would keep that shutout through three innings, as in the third, after giving up back-to-back singles to lead off the frame, the junior induced a grounder back to the box, forcing the lead runner, and then a groundout to second.  But MSU's Ali Grant connected on a 2-2 pitch for a homer to straightaway center, tying the game at 3-all.

The offense took the lead right back in the bottom of the third, wasting no time re-gaining the edge.  Senior KC Boldt (Red Wing, Minn./Red Wing) led off with a single back through the middle and Rutkowski worked a walk to put two runners on with nobody away.  A sacrifice bunt moved both runners into scoring position, and Boldt then beat the throw home on a Kelsey Phalen (Batavia, Ill./Batavia) grounder to short to re-claim the lead in Valpo's favor.  Rutkowski then scored, following a pitching change, on a full-count line-drive single to shallow left by sophomore Tori Brown (Harrison, Ohio/Harrison).

“[Layne] has been their number-one pitcher this year, and she's a very good pitcher,” said Stevens.  “We just came out today and continued to take good swings, as we've been doing since the end of the spring break trip.  We're taking good swings at good pitches, and it's turning into good results for us offensively.”

Staked to the two-run lead, McGee was almost perfect the rest of the way, setting down 12 of Michigan State's last 13 batters.  The lone blemish over the last four innings was a solo homer by Brett Williams to lead off the sixth, but Valpo got the insurance run right back in its half of the sixth.  Freshman Amanda Wisniewski (Lake in the Hills, Ill./Huntley) led off with a deep fly to right field that the Spartans lost in the sun, resulting in a triple, and eventually scored on a sacrifice fly by Strickland.

“Sam threw well all day today,” said Stevens.  “She was throwing well, and we were leading, so we saw no reason to make any changes there.  Even when she gave up a couple of home runs, she came back and responded well to get outs.  She really threw a good game for us today.”

McGee went the distance to improve to 8-3 on the year, scattering seven hits over the seven innings while walking just one batter.  Michigan State (18-11) starter Cassee Layne, the first of three Spartan pitchers, took the loss, falling to 7-7 after surrendering five runs, only two of which were earned, in 2.1 innings of work.  The Crusaders spread out the offensive production Thursday, as eight different players accounted for their nine hits, with Wisniewski responsible for the lone multi-hit game.

“We're playing really well right now and excited to start off league play against Detroit,” said Stevens.  “Detroit's basically a brand-new team this year, with nine freshmen, so we're not sure what they're going to bring to the field this weekend.  But we're playing really well all-around recently and will look to keep it going.”

Valparaiso (15-10) attempts to break the program's record for longest winning streak, as well as start Horizon League play on the right foot, as it hosts Detroit in a three-game series this weekend, beginning with a doubleheader Saturday afternoon.  First pitch Saturday is slated for 1 p.m., and live stats for both games of the twinbill will be available at www.valpoathletics.com.