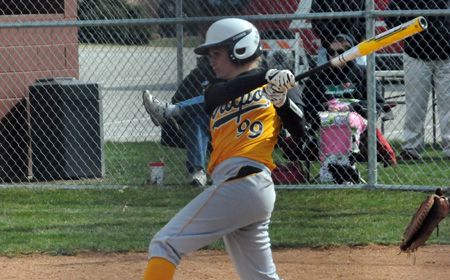 Valparaiso concluded a perfect start to Horizon League play this weekend with a 7-1 victory Sunday afternoon over Detroit at the Valparaiso University Softball Field, completing a three-game sweep of the Titans and registering their 11th consecutive victory, an on-going program record.

Unlike Saturday, when the Crusaders scored in their first time at-bat both games, it took a few innings for them to crack the scoreboard on Sunday, as Valpo stranded a pair of runners on base in each of the opening two innings.  The Crusaders finally got on the board in the third, as junior Sara Strickland (Scottsdale, Ariz./Horizon) poked a one-out double to the right-center gap.

Two batters later, junior Jordan Rutkowski (Alden, N.Y./Alden) and senior Sadie Conner (Washington, Ill./Washington) drew back-to-back walks to load the bases with two away.  Junior Kelsey Phalen (Batavia, Ill./Batavia) stepped up, fought back from an 0-2 count to get a full count and then hit a hard grounder back up the middle to score Strickland and Rutkowski for a 2-0 Valpo lead.

The Crusaders then broke the game open in the fourth inning.  Freshman Amanda Wisniewski (Lake in the Hills, Ill./Huntley) led off the inning with a double, and two batters later, fellow rookie Angie Doerffler (Fort Wayne, Ind./Concordia Lutheran) singled and advanced to second on the throw in to third base.  With two runners in scoring position, Strickland swung at the first pitch and lined a single into right, scoring both runners.  A misplay by the Titans' right fielder allowed the ball to get all the way to the fence, and the speedy Strickland scampered all the way home on the play, increasing the lead to 5-0.

First-pitch swings got the job done for the next two Crusader hitters as well.  Senior KC Boldt (Red Wing, Minn./Red Wing) lined a single into left and advanced to second on an error by Detroit's left fielder, while Rutkowski followed with a fly ball into left that fell in for an RBI double, scoring Boldt.  Following a pitching change, Phalen stepped in and delivered her third RBI of the day with a double to left to plate Rutkowski and make it 7-0 Valpo.

While the Crusaders were unable to add to their lead in their final two times at the plate, seven runs was more than plenty on Sunday.  Junior Alex Lagesse (Beecher, Ill./Beecher) couldn't match her perfect game performance of Saturday, but was nearly as good, allowing just one hit in her four shutout innings of work to improve to 6-5 on the year.  Junior Shaleigh Jansen (Ottawa, Ill./Ottawa Township) allowed a run in the fifth inning, but escaped a bases-loaded, one-out jam with no further damage and went on to pitch the final three innings, picking up her third save of the year.

Detroit (4-11, 0-3 Horizon) starting pitcher Karyn McCarty took the loss on Sunday, surrendering all seven runs in 3.1 innings of work.  Doerffler, Phalen and Strickland all had multi-hit games as the Crusaders pounded out 10 hits in the series finale, including five doubles.  Rutkowski and Strickland both scored a pair of runs, while Phalen led the way with her three RBIs.

Valparaiso (18-10, 3-0 Horizon) steps out of league play mid-week as the Crusaders travel to take on Northern Illinois in a doubleheader Wednesday afternoon.  First pitch is slated for 3 p.m., with live stats and live chat available at www.valpoathletics.com.