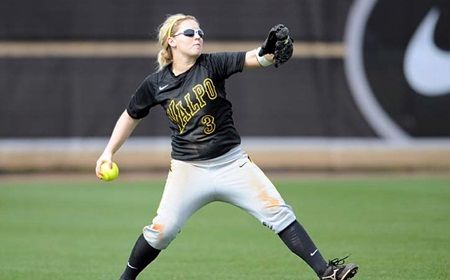 A nine-run second inning by UIC was the difference Sunday afternoon at the Valparaiso University Softball Field, as Valparaiso could not overcome the large deficit, eventually falling to the Flames in six innings, 17-6.

UIC started the scoring in its first time at-bat, as Melinda Macias led off with a double and eventually scored on an infield single by Ashley Hewett.  Valpo responded in the bottom of the first, however, as junior Sara Strickland (Scottsdale, Ariz./Horizon) launched a two-out solo homer over the right-center field fence to tie the game at one apiece.

But the Flames came back in the second with the nine-spot to take command of the game.  The first 12 batters of the inning for UIC reached, including five on doubles and two on home runs, as the Flames sent 14 hitters in all to the plate in the second inning.  Three Crusader pitchers saw action in the frame, with redshirt sophomore Amanda Bolton (Scottsdale, Ariz./Horizon [Arizona]) eventually retiring the last two batters of the inning.

“The mentality when you get down big is to just keep working back and scoring runs to try to cut into the lead, and not try to get it all back in one inning,” said Crusader head coach Jordan Stevens.  “We did that and were able to chip away and score some runs.  But one big inning is typically enough to lose a ballgame, and in that situation, we needed to find a way to get outs and not let things snowball on us.”

Valpo had a chance to cut into the 10-1 deficit in its half of the second, registering a pair of hits, but could not push a run across the plate.  The Crusaders did slice two runs off the lead in its half of the third, as freshman Angie Doerffler (Fort Wayne, Ind./Concordia Lutheran) reached on a one-out error and Strickland followed with a two-run bomb to straightaway center field.  For the junior, it marks her second multi-homer game of the season.

UIC (12-14, 3-2 Horizon) scored three runs in its half of the fifth to extend its lead to 13-3 and set up a possible run-rule victory, but the Crusaders extended the game despite being down to their final strike.  Doerffler reached on a fielder's choice, while Strickland drove a two-out single through the right side to put two on for senior KC Boldt (Red Wing, Minn./Red Wing).  Boldt drove a 1-2 pitch to left, easily far enough for her fifth round-tripper of the season to cut the deficit to 13-6.  The Flames added four more runs in the sixth inning to close the scoring.

Strickland's single in the fifth moved her into a tie in another category in the Crusader all-time record books.  The junior, who already holds Valpo's career runs scored record, tallied nine total bases on Sunday and now has 251 career total bases, matching the totals of Shannon Robinson and Taylor Callahan.  Strickland went a perfect 3-for-3 in the series finale, scoring three runs and also driving in three runs.  Senior Sadie Conner (Washington, Ill./Washington) also recorded a multi-hit game Sunday, going 2-for-3.

Crusader starter Sam McGee (Bloomington, Minn./Jefferson) took the loss on Sunday, falling to 11-4 after giving up four runs in her 1.1 innings of work, while all four Valpo pitchers gave up at least three runs against the Flames.  Devin Miller improved to 6-10 with the complete-game victory for UIC despite giving up six runs in six innings of work.

“After a game like today, you have to learn from it, but you also have to forget it quickly,” said Stevens.  “We have to get back to work and continue to improve on the things we have to improve on, and not let this result carry over into practice this week.”

Valparaiso (21-12, 4-2 Horizon) will look to bounce back as it steps out of league play Thursday for a home doubleheader against Purdue.  First pitch of game one is slated for 3 p.m., and all the action can be heard live on WVUR, 95.1 FM, Valparaiso and online at www.valpoathletics.com, which will also have a link for live stats.