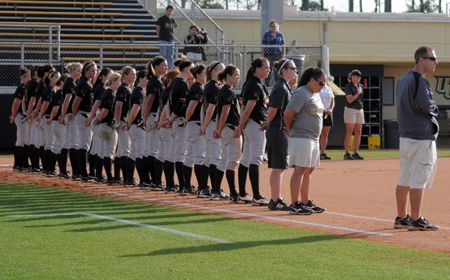 Previously: The Crusaders played a pair of league series last week, dropping two of three in a mid-week series at Butler to open play.  Valpo then traveled to Youngstown, Ohio, where Saturday’s action got canceled due to rain.  The Crusaders concluded the eight-game road trip on a high note, however, sweeping Sunday’s doubleheader from the Penguins.

Following the Crusaders: All four of this week’s games can be heard live on WVUR, 95.1 FM, Valparaiso and online at www.valpoathletics.com.  The official Crusader website will also have live stats for all four contests as well.

Series Notes: Wright State - Valpo trails the all-time series against the Raiders by a narrow 10-9 margin, but WSU holds a commanding 8-1 edge since the Crusaders joined the Horizon League.  Last season, Wright State swept a three-game series in Dayton by scores of 5-4, 6-2 and 10-5, and then knocked the Crusaders out of the HL Championship with a 4-0 decision in the semifinals.  Sara Strickland is 9-for-23 (.391) in seven games all-time against the Raiders, scoring seven runs and registering five RBIs, while Shaleigh Jansen has posted a 0.72 ERA over 9.2 innings of work versus WSU.
IPFW - Valpo owns a 20-12 edge all-time against the Mastodons, including wins in five of the last six meetings.  The two teams split a twinbill last season in Fort Wayne, with IPFW earning a 2-1 win in the opener before Valpo responded with a 1-0 victory in the nightcap.  Alex Lagesse combined with Jansen on the shutout in the second game, while Jordan Rutkowski went 3-for-5 over the doubleheader.

Let’s Play...One?: Most of the time so far this year when the Crusaders have taken the field, it has been to play two games, as Valpo has played a pair of games on the same day 18 of the 25 days it has played so far this season.  But from this point to the end of the regular season, only three of Valpo’s scheduled nine game dates are doubleheaders.  All three of the Crusaders’ remaining twinbills are against league foes, with a trio of single games against those same HL opponents, as well as three non-league games, left as well.

A Football Score: Valpo had to break out the bats to earn the win in the nightcap at Youngstown State on Sunday, posting 14 runs in a wild 14-11 victory over the Penguins.  It marked the first time the Crusaders had a game in which both teams scored in double figures since a 12-11 win over Purdue back on April 18, 2007.

Bats Back on Track: The 14 runs the Crusaders scored in the nightcap at YSU marked the second-most runs they have scored in a game this season, trailing only the 17 Valpo posted at Northern Illinois on March 30.  The 14-run single-game outburst came right on the heels of a six-game stretch in which the Crusaders scored just 15 total runs.  In fact, the 14 runs is more than Valpo had scored in each of its last three league series (UIC - 12; Loyola - 9; Butler - 7).

Going Yard: Valpo tallied six home runs last week, five of which came in the doubleheader at YSU, to up its season total to 37.  The 37 round-trippers are already second-most in a single season in program history, just five shy of last year’s record of 42.  It has been a balanced effort, as seven different players have connected on at least three homers, while no Crusader has more than seven.

Home Field Advantage: Through nine of 17 scheduled home games at the Valparaiso University Softball Field, the Crusaders own a 5-3-1 record, including the program’s first ever victory over Michigan State and a tie with Purdue.  The Spartans and Boilermakers are two of three BCS programs Valpo will host this season, as DePaul is scheduled to come to town later this year.

Raking in League Honors: While Lagesse wasn’t quite perfect in her other two outings that week, she ended the week with a perfect 3-0 record and a 0.47 ERA in her three starts, surrendering just five hits while striking out 15 in 15.0 innings of work to earn Horizon League Pitcher of the Week honors on March 28.  The honor was Lagesse’s fifth career weekly accolade from the league office, tied for fifth-most by a pitcher in league history.  The junior also became the second Crusader to earn a league weekly award this year, joining Jessie Marinec, who was named Batter of the Week on February 28.

And She Hits, Too: Lagesse stepped into the batter’s box during game action against YSU on Sunday for the first time since February 26, but showed no rust at the plate, going 5-for-7 over the twinbill.  The junior drove in the first game’s  opening run and also scored a pair of runs in the second contest.  Lagesse’s five hits were more than she had totaled all year to that point (4-for-19), and the pair of multi-hit games gives her six career games with at least two hits.

Another Week, Another Record: Junior Sara Strickland slugged a three-run double to the right-center gap in the sixth inning of the nightcap with YSU Sunday, giving her 39 career doubles, tying her with Shannon Robinson atop Valpo’s career charts.  The doubles record is the third career mark she has reached this season, joining the runs scored (118) and total bases (260) records.  Strickland, who paces the Crusaders with a .366 batting average, currently leads the Horizon League in hits (52) and doubles (11) and also ranks among the league’s top-five in total bases, stolen bases and runs scored.

Rutkowski On the Verge: Junior Jordan Rutkowski is about to implant her name atop one of the Crusaders’ career categories as well.  Rutkowski’s two-run, two-out homer in the seventh inning of the opener at YSU gave the junior 91 career RBIs, just one RBI shy of Ashley Wolter’s career record.  32 of those RBIs for Rutkowski have come this season, just eight away from the Crusaders’ single-season record and fourth-best in Crusader history, one spot behind...

Boldt Brings Them Home: Senior KC Boldt has tallied 33 RBIs on the season to lead the Crusaders, rank third on Valpo’s single-season chart, and rank third in the Horizon League.  Boldt added to her season tally with a five-RBI performance in the second game last Tuesday at Butler, her fourth career game with at least four runs driven in.  The senior, who had just 13 career RBIs entering the year, has picked up 18 of her RBIs in Valpo’s 14 Horizon League games.

Sadie-Lama-Ding-Dong: Senior Sadie Conner put on a power display over Valpo’s pair of games at Youngstown State on Sunday.  Conner delivered a homer in the seventh inning of the opener, before going deep in the second and sixth innings of the nightcap.  Conner is only the second known Crusader all-time to hit three home runs over the course of a doubleheader, joining Karen Constien, who did it against UMKC on April 24, 2004.  The trio of round-trippers also gave Conner six homers this year and increased her career total to 19, tied for second all-time at Valpo with Gina Rhoda, just three behind Ashley Wolter’s record of 22.