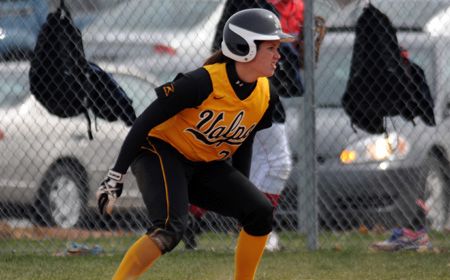 Previously: The Crusaders returned to the Valparaiso University Softball Field for the first time in two weeks and registered their second Horizon League three-game sweep of the season, dropping Wright State by scores of 2-1, 11-1 (6 inn.) and 4-2.  Valpo’s non-league game Saturday against IPFW was canceled due to unplayable field conditions and will not be made up.

Following the Crusaders: Thursday’s game against DePaul is scheduled to be broadcast live on WVUR, 95.1 FM, Valparaiso and online at www.valpoathletics.com.  The official Crusader website will also have live stats for all four of this week’s games, while there will also be live chats available from the Green Bay series.

Series Notes: DePaul - The Crusaders have never been able to earn a victory on the diamond against the Blue Demons, a traditional national power, as DePaul owns a 43-0-1 advantage in the all-time series.  This past fall, however, Valpo and DePaul played scoreless softball into the seventh inning at the VU Softball Field before the Blue Demons came out victorious.  The last time the two sides met during the championship season was on Apr. 3, 2008, when DePaul earned 6-2 and 8-2 victories over the Crusaders.
Green Bay - The Phoenix are 16-7 all-time against the Crusaders, but Valpo holds a 5-3 advantage since joining the Horizon League, mainly on the back of four shutout victories last season.  The Crusaders swept a regular season twinbill on Mar. 27, 8-0 and 3-0, and then defeated Green Bay on back-to-back days at the HL Championship, 4-0 and 1-0.  Current Crusaders have combined to surrender just three earned runs in 41.2 innings of work against the Phoenix, while offensively, Sadie Conner is 11-for-23 career versus GB, with two doubles, three home runs and seven RBIs.

A Look at the Standings: The Crusaders’ sweep of Wright State propeled them for a short time into second place in the Horizon League standings with just two league series remaining.  Valpo enters the week in third place, just one game back of Loyola for second and 1 1/2 games back of Butler for first, with the two teams ahead of the Crusaders slated to face off this weekend as well.

Pesky April Showers: In an unusual scene for a softball team in the Midwest, weather issues had affected just one of the Crusaders’ first 41 games of the season, a mere one-hour delay of the start time for Valpo-Syracuse at Florida.  But since then, the fickle Midwest weather has reared its ugly head, forcing the cancelation of one of three games at Youngstown State and the non-league matchup against IPFW, as well as necessitating an adjustment to the Wright State series to get all three games in.

Racking Up the Ws: Valparaiso enters this week on a five-game winning streak, with all five of those games coming in Horizon League play against Youngstown State and Wright State.  The five straight league wins ties for the Crusaders’ second best stretch since joining the league, trailing only the start of the 2010 HL campaign, when Valpo won six straight against Green Bay (2), Detroit (3) and Butler (1).  The Crusaders also won five straight league games in mid-April of 2008 against UIC (2), Butler (2) and Wright State (1).

Going Yard: Valpo moved three more steps closer to setting the program single-season record for home runs, connecting on three homers against Wright State to increase the season total to 40.  The 40 round-trippers are already second-most in a single season in program history, just two shy of last year’s record of 42.  It has been a balanced effort, as seven different players have connected on at least three homers, while no Crusader has more than eight.

Walk This Way: While the Crusaders hit .392 in the three-game sweep of Wright State, they also utilized their patience at the plate as a weapon, drawing 14 free passes and posting a team on base percentage of .489 over the three contests.  Five different Valpo players reached base in at least half their plate appearances, while Kelsey Phalen and Sara Strickland drew four walks apiece, the former picking up a pair of bases-loaded free passes.  On the season, Valpo has already recorded 124 walks as a team, just nine shy of the program’s highest total in the last 24 years.

Crusader Hurlers Step Up: Juniors Alex Lagesse and Sam McGee combined to give up 24 hits over the three games against Wright State, but limited the Raiders to just four total runs.  The efficiency in keeping the Raiders from crossing home plate was due to two main factors.  Lagesse and McGee had great control over the series, surrendering just one walk while striking out 17 batters.  They also combined to shut WSU down when runners got into scoring position, as the Raiders were just 3-for-32 in such situations over the course of the series.

Home Field Advantage: Through 12 of 16 scheduled home games at the Valparaiso University Softball Field, the Crusaders own a 8-3-1 record, including the program’s first ever victory over Michigan State and a tie with Purdue.  The Spartans and Boilermakers are two of three BCS programs Valpo will host this season, as DePaul is scheduled to come to town this week.

And She Hits, Too: Lagesse stepped into the batter’s box during game action against YSU on Apr. 17 for the first time since Feb. 26, but has showed no rust at the plate, going 7-for-16 (.438) in the five games since.  The junior connected on her first career home run in the victory over WSU in the opener last Thursday and also has a trio of doubles during that stretch as well.

What’s Next for Strickland?: The career hits and walks marks are next on the docket for junior Sara Strickland.  Strickland claimed her third outright cumulative career record and fifth overall career mark last Thursday with her 40th career double, breaking a tie with Shannon Robinson atop Valpo’s all-time chart in that category.  Strickland, who currently leads the Horizon League in hits, doubles and total bases and is second in batting average, is just three hits and four walks shy of Valpo’s all-time records in the respective categories.

Another Record-Breaker: Junior Jordan Rutkowski enjoyed six RBIs over the Crusaders’ trio of wins over Wright State last week, with a three-run walk-off blast in the middle game of the series giving her Valpo’s career RBI record outright.  Rutkowski, despite being in just her third season, has now driven in 97 career runs to top the Crusader record books.  38 of those RBIs have come this season for the junior, just two shy of Valpo’s single-season record and putting Rutkowski in a tie atop the Horizon League in the category.

Round and Round She Goes: Freshman Angie Doerffler has grown to know and love the 240-foot path around the bases in her rookie season with the Crusaders.  After going 6-for-10 with five runs scored in the sweep of Wright State, Doerffler has now scored 38 runs on the season, atop the Horizon League charts and already fourth in a single season in Valpo history.  The freshman, who also is hitting .333 and leads the Horizon League defensively with 113 assists from her shortstop position, has scored a league-best 17 of her runs in Valpo’s 17 league games.

Conner Keeps Crushing: Senior Sadie Conner now has four home runs over Valpo’s last five games, adding another four-bagger to her resume in the middle victory over Wright State last week.  Conner kept pace among the Crusaders’ leaders this year, staying one behind Rutkowski with her seventh homer of the year and matching fellow senior KC Boldt.  The homer also was Conner’s 20th career round-tripper, moving her ever closer to Valpo’s career record of 22.