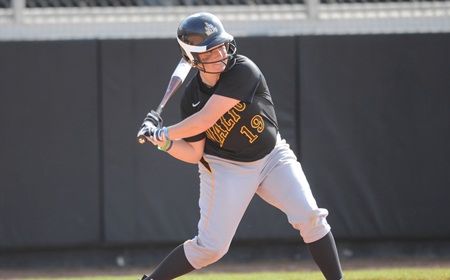 Senior Sadie Conner (Washington, Ill./Washington) went 4-for-4 with a career-high six RBIs, capping the day with her 22nd career home run to match the Crusader all-time record, as Valparaiso completed a series win over Green Bay with a 10-5 victory Sunday morning in Green Bay, Wis.  The win puts the Crusaders in a tie for first place in the league standings with one week remaining in the regular season.

“We were better prepared for [Green Bay pitcher Katie] Cooney today,” said Crusader head coach Jordan Stevens.  “We knew what to expect from Green Bay and the energy that they were going to bring.  I thought we did a nice job setting a good tone in the first inning and came out swinging the bat well.”

For the second straight game against the Phoenix, the Crusaders were able to put runs on the board in their first time at bat.  Senior Jill Jacobson (Beecher, Ill./Beecher) led off the game with a single into shallow left-center field.  After a pair of outs, Jacobson stole second and then advanced to third when senior KC Boldt (Red Wing, Minn./Red Wing) reached on a Phoenix fielding error.

Given second life in the inning, junior Jordan Rutkowski (Alden, N.Y./Alden) stepped up and knocked a hard single back up the middle, scoring Jacobson to give the Crusaders the early lead.  For Rutkowski, it was her 41st RBI of the year, giving her sole possession atop the Crusader single-season chart in the category.  Conner followed by lining the first pitch she saw into center field to plate Boldt for a quick 2-0 advantage.

Green Bay threatened to cut into the Crusader lead in the bottom of the second, loading the bases with one out on a walk and a pair of hit batsmen.  But Valpo starter Alex Lagesse (Beecher, Ill./Beecher) registered a strikeout for the key second out of the frame and then induced a popup to keep the Crusader lead at two runs.

Valpo then extended the lead in its half of the third.  One-out singles by Boldt and Rutkowski put a pair of runners on for Conner, who drove them both in with a line drive down the right-field line into the corner on an 0-2 pitch.  The senior got a double out of it, advancing to third on a misplay by the Phoenix right fielder.  Junior Kelsey Phalen (Batavia, Ill./Batavia) then laid down a beautiful squeeze bunt, with Green Bay unable to even attempt to make a play on Conner as she crossed the plate to give Valpo a 5-0 lead.

Green Bay snapped the no-hitter and the shutout all at once to lead off the bottom of the fourth, as Alli Rivera lifted a solo homer to center field to cut the Crusader edge to 5-1.  But Rutkowski, leading off the Valpo fifth, golfed an 0-1 pitch well over the fence in center field to get the run right back.  For the junior, it was her tenth homer of the season, snapping the tie she was in atop the Valpo single-season chart in that category as well.

After a pitching change, Conner singled into center and then moved up to second when Phalen was hit by a pitch.  A sacrifice bunt moved both runners up 60 feet, and then freshman Amanda Wisniewski (Lake in the Hills, Ill./Huntley) hit a blooper into shallow left-center.  With the wind moving the ball around, a trio of Phoenix fielders were unable to even make a play on it, allowing Conner to trot home to push the lead back to 7-2.

Rivera came up with a two-out RBI single for Green Bay in its half of the fifth to slice one of the runs off the Crusader advantage, moving the Phoenix back to within 7-3, but Valpo answered and then some in the sixth.  Junior Sara Strickland (Scottsdale, Ariz./Horizon) led off the frame with a single back through the middle.  Boldt hit into a fielder's choice as Strickland was forced out, but Rutkowski followed with a four-pitch walk to put two on for Conner.

The senior delivered a three-run bomb just to the right of center field to put Valpo into double digits on the day.  For Conner, it was her ninth round-tripper of the season and 22nd of her career, tying her with Ashley Wolter atop the Valpo career chart in the category.  Green Bay got a three-run homer from Kendra Woepse in its half of the sixth to move back within five runs, but only one of its last seven hitters reached base as the Crusaders closed out the series win.

Junior Sam McGee (Bloomington, Minn./Jefferson) earned the victory in relief Sunday for Valpo, tossing the final five innings in relief to improve to 15-5 on the year, a career high in victories for the junior and tied for third-most in a single season in Crusader history.  Katie Cooney took the loss for Green Bay (20-21, 7-13 Horizon), allowing six runs on eight hits in her four-plus innings to fall to 9-10.  The Crusaders tallied 13 hits on Sunday, led by Conner's 4-for-4 effort.  Rutkowski also picked up three hits, while Boldt and Conner joined Rutkowski in crossing the plate three times apiece.  Strickland tallied a pair of hits as well, giving her solo possession of the Crusader career mark in that category.

With the win Sunday, Valparaiso (30-18-1, 13-7 Horizon) moves into a three-way virtual tie atop the Horizon League standings with just one league series remaining next weekend.  Prior to that, however, Valpo will travel east to South Bend to take on #22 Notre Dame in a single game Tuesday afternoon at 4 p.m. CDT.  Live stats and a live chat for the game will be available at www.valpoathletics.com.

“We're playing well going into the last week of the regular season,” said Stevens.  “Again though, just as all year long, it hasn't been about where we're at in the league standings.  Rather, it's about how we play the games and us taking care of what we need to take care of.  If we do that, we'll let everything else fall where it might.”