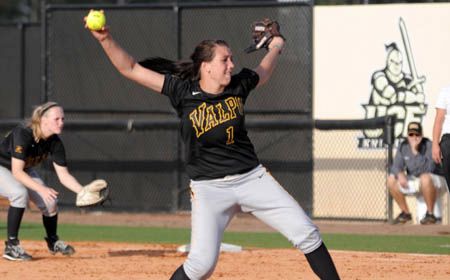 Sam McGee moved into second on Valpo's single-season wins chart with a pair of victories last week. (Dave Schofield)
Related Links
Valparaiso (30-18-1, 11-6 Horizon)
Tues., May 3 - at #24/22 Notre Dame (38-8, 14-1 Big East) - 4 p.m. CDT
Sat., May 7 - vs. Cleveland St. (25-17, 10-6 Horizon) [DH] - 1 p.m.
Sun., May 8 - vs. Cleveland St. - noon
Next Up in Crusader Softball: Entering the week tied atop the Horizon League standings, Valparaiso concludes the 2011 regular season with four scheduled games.  The Crusaders step out of Horizon League play to take on nationally-ranked Notre Dame on Tuesday afternoon before ending the regular season with a three-game series at home against Cleveland State this weekend.

Previously: The Crusaders took two out of three games at Green Bay this past weekend to move into a tie atop the league standings.  After dropping the opener, 2-1, Valpo bounced back with big 12-0 and 10-5 victories in the final two games to earn the series victory.  Valpo’s scheduled single game Thursday versus DePaul was rained out and will not be made up.

Following the Crusaders: This weekend’s games against Cleveland State are scheduled to be broadcast live on WVUR, 95.1 FM, Valparaiso and online at www.valpoathletics.com.  The official Crusader website will also have live stats for all four of this week’s games, while there will also be a live chat available from the Notre Dame game.

Series Notes: Notre Dame - Valparaiso trails the all-time series with Notre Dame, 30-11, but most of Valpo’s wins came in the early to mid ‘80s, as the Irish have won the last 29 meetings.  But the Crusader offense has stepped it up recently against ND, as after scoring just 13 runs in the previous 26 meetings with the Irish, Valpo has combined for 15 runs over the last two games.  The last meeting was on Apr. 21 of last season, when the Irish needed a run in the bottom of the seventh for a 7-6 win.  Sara Strickland is 6-for-10 all-time against Notre Dame, while Kelsey Phalen went 2-for-3 with two runs scored and a homer in last year’s meeting.
Cleveland State - The Vikings own a 15-5 edge all-time over the Crusaders, and Valpo is just 1-8 all-time against CSU since joining the Horizon League.  Last season, the Vikings swept a three-game series in Cleveland (3-2, 7-0, 5-1) and also handed the Crusaders a tough 1-0, eight-inning defeat in league tournament action.

Atop the Standings: By virtue of their series win at Green Bay, combined with Butler going 2-4 and Loyola going 1-2 last week, Valparaiso ascended into a tie atop the Horizon League standings entering the final week of play.  The Crusaders are currently deadlocked with Loyola on top of the table, while Butler is “virtually” tied with the Crusaders and Ramblers, just percentage points behind.

One Weekend to Go: But the tight Horizon League race is still anybody’s for the taking, as five different squads are still mathematically alive to claim the regular season title, separated by just 1 1/2 games entering the week.  Cleveland State has a three-game midweek series, and then four of the five squads (excepting Butler) play three-game series this weekend.  Valpo can still finish anywhere from first through fifth in the final standings, with the 1 seed for the HL Championship hosting the event, while the top two seeds receive a first-round bye.

Big Bats: The Crusaders’ recent stretch of seven wins in their last eight games has been punctuated by a potent offense.  Over the last eight contests, Valpo is hitting .357 and has scored in double figures on four occasions, bringing to nine its total number of games scoring ten or more runs this year.  Last weekend’s outburst, which saw the Crusaders post 23 runs over the three-game series, set the team up to threaten numerous program single-season marks over the remainder of the year.

Going Yard: One of those records already has fallen by the wayside, as the Crusaders surpassed the program single-season home run record of 42 this past weekend.  Entering the weekend with 40, a home run by Kelsey Phalen in the second inning of the nightcap of Saturday’s doubleheader tied the previous record, and then Sadie Conner broke the team record with a third-inning round-tripper.  Valpo launched six homers last weekend in all, pushing its season tally to 46.

Individual Records Falling as Well: Normally, breaking a single-season or career record in any category is cause for celebration, but not for this year’s Crusader squad, which is making breaking records old hat.  Just last weekend, Sara Strickland set the career hits record (184), while Sadie Conner tied the career home runs mark (22) in her final at-bat of Sunday’s game.  On the single-season charts, Jordan Rutkowski ascended to the top of both the Crusaders’ home run (10) and RBI (42) charts over the course of the three-game series.

Player of the Week: For the third time this year, a Crusader player has earned weekly honors from the Horizon League office, as Sadie Conner was tabbed the league’s Player of the Week on Monday.  Conner hit .667 and slugged at a 1.444 clip last week while scoring five runs and tallying eight RBIs.  The senior capped her week with a 4-for-4, six-RBI performance in the series finale victory.  Conner joins Jessie Marinec (Feb. 28, Player) and Alex Lagesse (Mar. 28, Pitcher) as weekly honorees by the league this season.

Home Field Advantage: Through 12 of 15 scheduled home games at the Valparaiso University Softball Field, the Crusaders own a 8-3-1 record, including the program’s first ever victory over Michigan State and a tie with Purdue.  With three games remaining, Valpo has an opportunity to reach double-digit victories at home for the fifth time in the nine-year history of the team’s softball facility.

Strickland’s Next Conquest: Junior Sara Strickland earned her fourth cumulative career record last weekend at Green Bay, as her five-hit series was more than enough to give her the Crusaders’ all-time hits record.  Strickland, who is also now just two walks shy of that career record, went 5-for-9 last week to raise her batting average to a league-best .380.  The junior also paces all Horizon League players in total hits (60) and doubles (15).

Conner Carries On: Senior Sadie Conner has been crushing over the last two weeks, as her record-tying career home run Sunday against Green Bay was her sixth home run in the Crusaders’ last eight games.  Over that stretch, Conner is hitting .440, has scored 10 runs and driven in 14 runs to help the Crusaders go 7-1.  Conner, who now paces the Horizon League in league-only play with seven round-trippers, is also now second in Crusader history with 95 career RBIs and already ranks among Valpo’s single-season top-fives this year in home runs (9, t-2nd), slugging pct. (.597, 3rd) and RBIs (34, 5th).

Rutkowski Keeps Raking: Another pair of records fell courtesy of junior Jordan Rutkowski this past weekend.  Rutkowski, who had already set Valpo’s career RBIs record the previous week, claimed the single-season mark in that category as well against Green Bay and has now driven in a Horizon League-best 42 runs.  She also connected on a pair of homers over the weekend, giving her 10 this season to set a new Valpo standard in that category.  Rutkowski, who also leads the league with 88 total bases, is hitting .500 over Valpo’s last eight games, raising her batting average in league play to a team-high .410.

Boldt Brings Them In: While Rutkowski has already set Valpo’s single-season RBI record, she doesn’t even lead the team in RBIs in Horizon League play.  That distinction belongs to senior KC Boldt, whose three-run homer in the nightcap Saturday at Green Bay gave her 22 RBIs in league play this season, the most among all league players.  Boldt has now totaled 37 RBIs overall this year, tied for third most in a single year in program history and good for fourth in the league,

First-Rate Phalen: Junior Kelsey Phalen also enjoyed a stellar weekend at Green Bay, going 4-for-7, including a pair of doubles and a home run, while also drawing a walk as well.  Over Valpo’s last eight games, she has reached base at exactly a .500 clip, and has provento be steady for the Crusaders in the 7 spot in the order this year.  In 27 games in that spot in the lineup, Phalen has reached base at a .419 clip and is slugging .529, picking up 12 extra-base hits, including nine doubles.