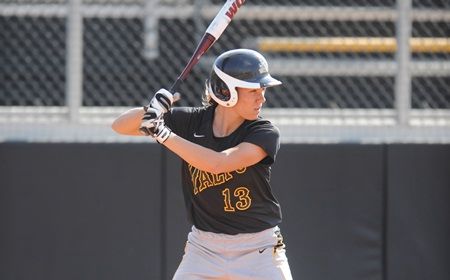 Eight runners stranded on base hurt Valparaiso's chances Tuesday afternoon at #25/21 Notre Dame, as the Crusaders eventually fell to the Fighting Irish in six innings, 10-2.

“More than leaving runners on base was the fact we came out flat today,” said Crusader head coach Jordan Stevens.  “By the time we got into the game, we had already handed Notre Dame control of the game.  It's disappointing to come out the way we did, because we're a much better team than what we showed today.  We have to give ourselves the opportunity to play at the level we expect to play at, and we can't do that with the approach we took at the start.”

The Irish got the scoring started in their half of the first, as Alexia Clay reached on a one-out infield single and scored two batters later on a two-run homer to right-center by Dani Miller.  Valpo had a good opportunity to cut into the deficit in the top of the second thanks to a leadoff double to the wall in right by senior KC Boldt (Red Wing, Minn./Red Wing).  Junior Jordan Rutkowski (Alden, N.Y./Alden) was hit by a pitch to put two on with nobody out, but the Crusaders were unable to advance either runner.

Notre Dame put two more runs on the board in the third, as back-to-back singles followed by a sacrifice bunt put two in scoring position with one out for Heather Johnson, who drove them both in with a double to deep center field.  But the Crusaders answered immediately in the fourth, as Boldt walked and senior Sadie Conner (Washington, Ill./Washington) picked up a one-out single to put a pair of runners aboard.  After a groundout moved both seniors up 60 feet, sophomore Tori Brown (Harrison, Ohio/Harrison) lined the first pitch she saw down the left-field line, plating both Valpo runners to cut the deficit to 4-2.

A pair of Crusader errors would allow Notre Dame to add those two runs right back to its lead in its next at-bat.  A leadoff single by Katie Fleury and a Crusader fielding error put two on with none out, and again the Irish sacrificed both runners up into scoring position.  Lauren Stuhr then hit a grounder to second, but the throw home to try to cut down Fleury was well wide as the Irish made it 5-2.  Notre Dame scored another run later in the frame on a sacrifice fly as well to push its lead back to four runs.

Valpo had solid chances to cut into the Irish advantage again in each of the next two innings, as senior Jill Jacobson (Beecher, Ill./Beecher) led off the fifth with a single and eventually made her way to third, while the Crusaders also placed two in scoring position with two outs in the sixth.  But Valpo was unable to push another run across the plate either time, and Notre Dame closed the game with a four-run bottom of the sixth.

Junior Sam McGee (Bloomington, Minn./Jefferson) took the loss for Valpo, falling to 15-6 after surrendering four runs in 2.1 innings of work in the starting assignment.  Laura Winter improved to 21-3 after tossing the first four innings for Notre Dame (39-8).  Six different Crusaders picked up hits on the day, while Boldt walked twice to go along with her double in her lone official at-bat.

Valparaiso (30-19-1) closes out the regular season at home this weekend with a key three-game Horizon League series against Cleveland State.  The Crusaders play a doubleheader at Saturday at 1 p.m. before closing the series with a single game Sunday at noon, as they look to position themselves for a possible first-round bye in the league tournament or even the top overall seed and hosting privileges.  All three games this weekend can be heard live on WVUR, 95.1 FM, Valparaiso or online at www.valpoathletics.com, which will also have links for live stats.