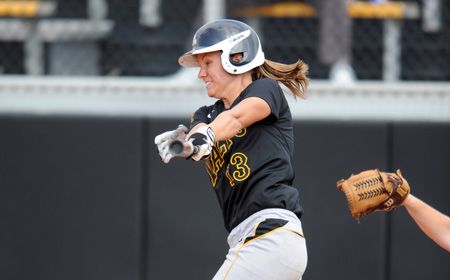 Valparaiso senior outfielder KC Boldt (Red Wing, Minn./Red Wing) earned the Crusaders’ second straight Horizon League Player of the Week honor after being nearly perfect at the plate in the final week of the regular season, culminating with a pair of home runs Sunday against Cleveland State to help Valpo clinch second place in the league standings.

Boldt kicked off the week with a double in her only official at-bat against #25/21 Notre Dame on Tuesday, drawing a pair of walks as well and coming around to score after one of those free passes.  Then in Saturday’s series opener against the Vikings, which was eventually suspended and completed Sunday, the senior went 2-for-3 and scored Valpo’s first run of the game in the four-run fourth inning in an eventual 4-2 victory.

But Boldt saved her best for her final career home game Sunday afternoon.  The senior broke the seal on the scoreboard in her first at-bat, leading off the bottom of the second with a solo homer well over the left-center fence.  Boldt then stepped up two innings later with a runner on base and repeated the feat, driving a round-tripper over the wall in straightaway center.  Boldt’s pair of home runs, which accounted for all three Crusader runs in the 3-0 victory, marked her first career multi-homer game and gave her 10 four-baggers on the year, tied with teammate Jordan Rutkowski for most in a single season at Valpo all-time.

Boldt closed the week 5-for-6 over the three games, good for an .833 batting average, and got on base at an .875 clip.  The senior also posted an incredible slugging percentage of 2.000 on the week as well.  Boldt and the rest of the Crusaders will return to the field Thursday afternoon at Loyola in their first game at the 2011 Horizon League Softball Championships, taking on either Butler or Wright State.