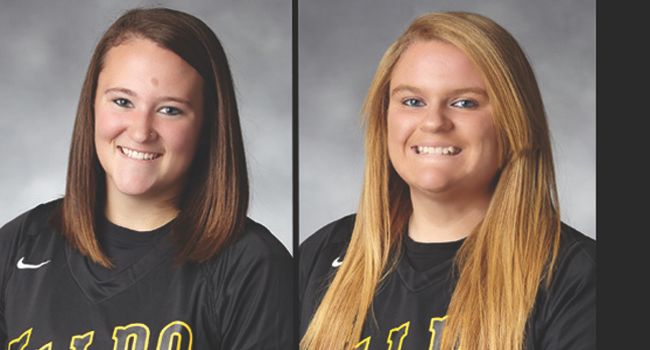 After helping Valparaiso to a 3-1 opening weekend at the Ramada Inn Classic in Ames, Iowa, freshman Brittany Duncan (Fairborn, Ohio/Fairborn) and senior Alex Lagesse (Beecher, Ill./Beecher) have been named Horizon League Batter and Pitcher of the Week, respectively.

Duncan earned the league’s weekly honor after her first weekend of collegiate action.  The rookie went 6-for-14 (.429) for the week with two runs scored and a team-high six RBIs while posting a .714 slugging percentage.  Duncan picked up hits in all four games last weekend, including 2-for-4 efforts against both Iowa State and Drake in victories.  She tallied an RBI double in Valpo’s win over Nebraska-Omaha and hit her first career homer, a three-run shot, as part of a four-RBI game against Iowa State.

Meanwhile, Lagesse earned two of the Crusaders’ three wins over the weekend, posting a perfect 2-0 record.  The senior tossed a four-hit shutout in her first start of the season against Nebraska-Omaha, striking out nine in a 6-0 Valpo victory.  Lagesse also started and went the distance for the victory against Drake, surrendering just two earned runs while striking out four in that win.  She also entered in relief in Valpo’s other two games last weekend, ending the tournament with a 2.33 ERA and 18 strikeouts in 18 innings pitched.  For Lagesse, it was her sixth career Pitcher of the Week honor from the league office, fifth-most in Horizon League history.

Duncan, Lagesse and the rest of the Crusaders have this weekend off before returning to action at the Frost Classic in Chattanooga, Tenn. on Friday, Feb. 24.