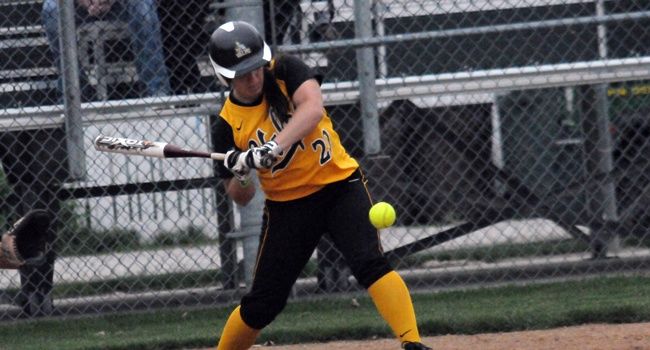 Rutkowski went 4-for-6 over Saturday’s two games with four runs and nine RBIs in addition to her three long balls.  The hitter immediately behind her in the order, redshirt junior Joylyn Ichiyama-Drewry (Torrance, Calif./Redondo Union), had a huge day as well, going 5-for-6 with two doubles, a homer, three runs scored and four RBIs.

The Crusaders never trailed in the opener against UT-Martin, jumping out with four runs in the bottom of the first.  Freshman Lindsey Norway (Chicago, Ill./Chicago Christian) and sophomore Angie Doerffler (Fort Wayne, Ind./Concordia Lutheran) led off the frame with consecutive walks, and three batters later, Rutkowski brought home Norway with an RBI single.  Ichiyama-Drewry then drove in both Doerffler and Rutkowski with a two-run double, and would later score on a throwing error by the Skyhawks catcher to make it 4-0 after just one inning.

UT-Martin would tie the game with two runs apiece in the second and third innings, but Valpo answered with a pair in its half of the third, as senior Sara Strickland (Scottsdale, Ariz./Horizon) led off with a walk and stole second before Rutkowski cranked out her first home run of the day to make it 6-4.  Ichiyama-Drewry added a two-run homer of her own in the fifth inning to provide the final margin.

Rutkowski went 2-for-3 with two runs and three RBIs in the win over the Skyhawks, while Ichiyama-Drewry went 3-for-3 with two runs and four RBIs.  Senior Shaleigh Jansen (Ottawa, Ill./Ottawa Township) entered in relief in the fourth inning and pitched 3.1 scoreless innings for the win, her first decision of the season.  Casey Vincent started and took the loss, allowing six runs in 2.1 innings for UT-Martin (7-6).

Valpo’s contest against Niagara was scoreless through two and a half innings, but the Crusaders exploded for seven runs in their half of the third.  It started with the bases loaded and one out, when Rutkowski stepped up and delivered Valpo’s first grand slam of the year over the right-field fence to give the Crusaders a 4-0 lead.  Later in the frame, sophomore Amanda Wisniewski (Lake in the Hills, Ill./Huntley) knocked a two-run double down the left field line and eventually scored on an RBI single by Norway to make it 7-0 Valpo.

A one-out RBI single got Niagara on the board in the fourth, but two runs from the Crusaders in their half of the inning set up the run-rule victory.  A pinch-hit leadoff single by junior Tori Brown (Harrison, Ohio/Harrison) set the stage for Rutkowski.  The senior capped her monster day with a two-run shot over the left-field wall to give Valpo the 9-1 lead that it would end the game with.

Doerffler, Ichiyama-Drewry, Norway and Rutkowski each had two hits in the win over the Purple Eagles, while Rutkowski drove in six of the Crusaders’ nine runs.  Senior Alex Lagesse (Beecher, Ill./Beecher) earned the complete-game win, striking out five while allowing just the one run to improve to 3-1 on the season.  Julie DiMatteo suffered the loss for Niagara (0-4), giving up seven runs in her three innings of work.

“I was really pleased with the way we approached both games today against two quality opponents,” said Crusader head coach Jordan Stevens.  “We had good contributions all over the field in every facet of the game, and we have to continue to do that tomorrow to end this tournament on a high note.”

Valparaiso (6-2) closes out the Frost Classic on Sunday morning, as the Crusaders face Belmont at 10 a.m. CST.  Live stats for the finale will be available through www.valpoathletics.com.