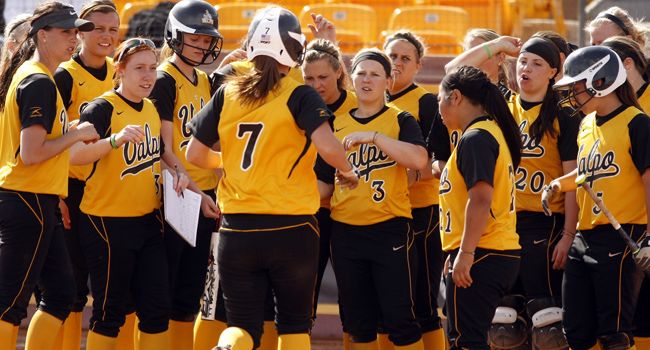 Next Up in Crusader Softball: Valparaiso closes its spring break trip as it attempts to get back on the winning track this weekend at the San Diego Classic II, co-hosted by San Diego State and the University of San Diego.  The Crusaders will play both host schools, as well as CSU Bakersfield, Long Beach State and UNLV over the three-day span.

Following the Crusaders: Live stats for select games from the San Diego Classic II will be available through www.valpoathletics.com.

Head Coach Jordan Stevens: Jordan Stevens is in his second season at the helm of the Valparaiso University softball program in 2012 after leading the Crusaders to a successful season in his first year in charge in 2011.  Stevens, who now owns a record of 45-29-1 at the helm of the Crusaders, guided Valpo to 34 victories in his debut campaign, just one win shy of the program's single-season record.  Valpo finished Horizon League play with a 15-7 record, finishing just one-half game out of the regular season championship, and was within one run of advancing to the league tournament championship.

Series Notes: Valpo has never faced any of the five teams it will face this weekend.  In fact, this is the Crusaders’ first time ever taking the field in California, capping a trip that saw the team play in four states (Texas, New Mexico, Arizona) for the first time in program history.

Getting Off the Schneid: Valpo enters this weekend attempting to break a season-long five-game losing streak after dropping all five games at the Diamond Devil Invitational against tough competition last weekend.  It marks the Crusaders’ longest losing streak since falling in six consecutive games from May 3-6, 2007.

League Honorees: Through four weekends of play, the Crusaders already have tallied five Horizon League weekly award winners.  Most recently, redshirt sophomore Jessie Marinec received her second career Player of the Week honor for her performance last week.  Senior Jordan Rutkowski has twice been named Player of the Week this year, while freshman Brittany Duncan was named the Player of the Week and senior Alex Lagesse Pitcher of the Week (her sixth career award, fifth-most in league history) after the season’s opening weekend.

Taking an Unfamiliar Route: Marinec entered last week having hit just four career home runs, but matched that total during an 8-for-19, 6 R, 5 RBI week that earned her HL Player of the Week honors.  Marinec’s four round-trippers came in four different games, including three consecutive.  One of the home runs came against #5 Arizona State, the second time in her career the redshirt sophomore has gone yard against a top-five opponent (Florida).

Whole Team Goes Deep: Despite having a rough go at last weekend’s tournament, the Crusaders still tallied seven home runs as a team over the five losses, continuing their trend of round-trippers up and down the lineup.  As a team, Valpo has already recorded 25 home runs through the season’s first 19 games, a mark which ranks 10th nationally.  Rutkowski leads the way with seven four-baggers, while six Crusaders in all have hit at least two home runs already.  The 25 home runs also already is third-most in a single season in program history.

Walk This Way: Senior Sara Strickland has been solid at the plate over the last 10 games, going 10-for-28 (.357) with nine runs scored, but what might be most impressive is her eye at the plate.  Strickland has drawn eight walks over the last 10 games while striking out just once, extending the career walks record she set earlier this season to 80.  In fact, on the season, Strickland has walked 11 times while striking out just twice and has an on-base percentage of .388 despite a batting average of just .269.