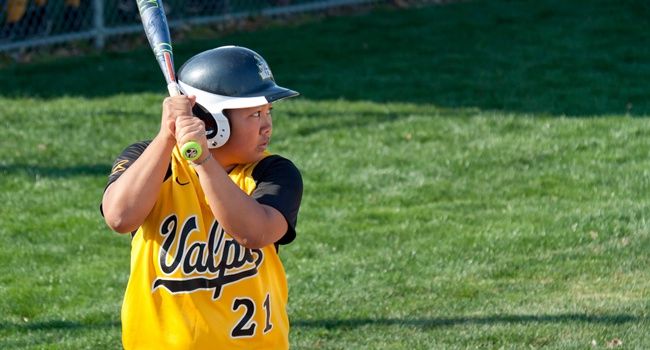 Valparaiso got off to a 2-0 start in Horizon League play on Saturday afternoon, earning a pair of victories over host Detroit by scores of 7-2 and 12-3.

The day started off on the wrong foot for the Crusaders, as Detroit’s Sara Cupp connected on a two-run homer in the Titans’ first at-bat to give UDM an early 2-0 lead.  It would take a few innings for Valpo to even things up, as the Crusaders first got one run back in the top of the second when a single by redshirt sophomore Jessie Marinec (Alsip, Ill./Marist) plated redshirt junior Joylyn Ichiyama-Drewry (Torrance, Calif./Redondo Union).  Valpo was then able to tie the game in the fourth as senior Jordan Rutkowski (Alden, N.Y./Alden) led off with a single and eventually scored on a sacrifice fly by Marinec.

The teams would remain knotted up at two apiece until the top of the sixth inning, when the Crusaders seized control.  Freshman Brittany Duncan (Fairborn, Ohio/Fairborn) led off the inning with a solid single into center field, and Rutkowski followed by launching her ninth home run of the season over the right-center field fence to give Valpo a 4-2 lead.  Ichiyama-Drewry proceeded to keep the momentum with a liner down the left field line and was able to advance to second on an error by the Titans.  Pinch-runner Amanda Korb (Indianapolis, Ind./Lutheran) came home one batter later, as senior Kelsey Phalen (Batavia, Ill./Batavia) singled into left, followed by another Detroit misplay  to make it 5-2 Valpo.

Senior Alex Lagesse (Beecher, Ill./Beecher) helped keep the lead at three runs by setting down the Titans in order in the bottom of the sixth, part of a stretch of 13 consecutive outs.  Valpo then gained a pair of insurance runs in the seventh, as sophomore Angie Doerffler (Fort Wayne, Ind./Concordia Lutheran) doubled off the wall on the first pitch in the inning and Duncan poked a two-run homer over the left-center fence two batters later.  The Titans tallied a pair of two-out hits in the seventh, but could not cut into the Crusader lead.

Lagesse earned the complete-game win to improve to 7-5, scattering five hits over her seven innings, while Julia Maksym fell to 4-10 for Detroit after surrendering five runs in five-plus innings.  Ichiyama-Drewry set a new career high by going 4-for-4 in the opener, while Duncan and Rutkowski each had a pair of hits as well and Marinec drove in two runs.

The story of the second game, at least for the first six innings, was the performance of senior Sam McGee (Bloomington, Minn./Jefferson) in the circle.  McGee walked the leadoff Titan in the bottom of the first, a runner who was promptly picked off, and allowed a leadoff double in the fifth for the only two baserunners in the first six innings.

Meanwhile, the Crusaders slowly built a lead.  Valpo led from the first frame, plating a run in the opening inning when senior Sara Strickland (Scottsdale, Ariz./Horizon) singled with two outs, stole second and came home on a solid single from Duncan.  The Crusaders then added another run in the fifth as Phalen, who led off the inning with a single, eventually scored on a Doerffler base knock.  Valpo pushed its lead to 4-0 in the sixth on a two-run homer by Ichiyama-Drewry, also scoring Rutkowski.

The Crusader bats absolutely exploded in the seventh inning, putting up an eight-run frame on eight hits, a hit batter and two Detroit errors.  Eight different Valpo players scored runs in the inning, while six hitters picked up at least one RBI.  Doerffler tallied hits in both of her at-bats during the frame, posting a double and a single, while Jennifer Hermanson (Beecher, Ill./Beecher) entered as a pinch-runner partway through the inning, scored a run and then recorded a base hit when her turn in the order came back around.

Valpo looked poised for a 12-0 win, but could not register the final out of the seventh inning, as Detroit had the bases loaded after a single, an error and a walk.  The Titans would pick up three consecutive singles to score three runs with the bases loaded and the lead cut to 12-3, but senior Shaleigh Jansen (Ottawa, Ill./Ottawa Township) entered in relief and induced a grounder back to the circle on the first pitch to close out the sweep.

“Two wins are a great way to start off Horizon League play, but we're going to have to find a way to be more consistent at the plate for seven innings,” said Crusader head coach Jordan Stevens.  “We have to learn that when we get our opponents in a position to keep them down, we take advantage.”

McGee improved to 7-2 with the win, allowing no earned runs in her 6.2 innings of work while striking out five.  Detroit (7-16, 0-2 Horizon) starter Karyn McCarty took the loss, surrendering five runs on 11 hits in two separate stints in the circle in falling to 2-4.  Doerffler, Duncan and Phalen all picked up three hits apiece in the nightcap, while four different Crusaders scored two runs apiece.

“I thought that we got two good performances from our starting pitchers for the second straight doubleheader today,” said Stevens.  “They both were in control for the most part and did a good job keeping runners off the basepaths.”

Valparaiso (16-9, 2-0 Horizon) looks for the series sweep on Sunday at 11 a.m. CDT.  Live stats and a live chat will be available through www.valpoathletics.com.