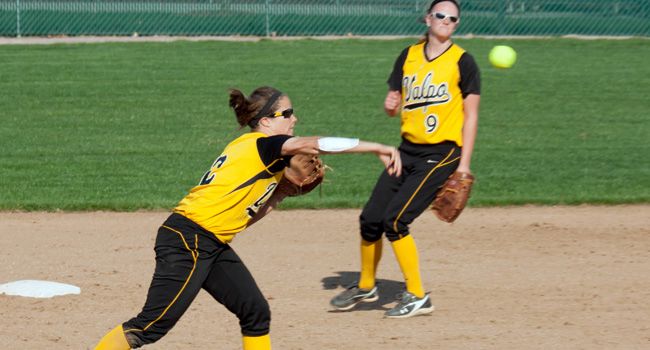 Next Up in Crusader Softball: Valparaiso comes home for a four-game week this week, as the Crusaders host Purdue in non-league action on Thursday afternoon before welcoming Green Bay for a three-game Horizon League set this weekend.

Previously: Valpo broke out the bats last week, going 5-0 while scoring at least seven runs in all five games and winning all five games by at least five runs.  The Crusaders swept a non-league twinbill from IUPUI at home by scores of 8-1 and 7-1 before traveling to Detroit and starting off HL play with a three-game sweep, winning 7-2, 12-3 and 9-1.

Following the Crusaders: Live stats for all four of this week’s games will be available through www.valpoathletics.com.  In addition, WVUR (95.1 FM, Valparaiso) will continue its spring 2012 broadcast schedule as it carries the Crusaders’ game against Purdue on Thursday (Chris Kleinhans-Schulz on the call), with the audio webcast also available online.  This weekend’s games against Green Bay will not be broadcast.

Head Coach Jordan Stevens: Jordan Stevens is in his second season at the helm of the Valparaiso University softball program in 2012 after leading the Crusaders to a successful season in his first year in charge in 2011.  Stevens, who now owns a record of 51-30-1 at the helm of the Crusaders, guided Valpo to 34 victories in his debut campaign, just one win shy of the program's single-season record.  Valpo finished Horizon League play with a 15-7 record, finishing just one-half game out of the regular season championship, and was within one run of advancing to the league tournament championship.

Series Notes: Purdue - The Boilermakers own a 24-8-2 advantage in the all-time series over the Crusaders, a series which has seen the two squads face off at least once in each of the last eight years.  Most recently, in a doubleheader in Valpo on April 7, 2011, Purdue won game one 8-2 before game two was called on account of darkness as a 4-4 tie.
Green Bay - The Crusaders took two of three from the Phoenix in Green Bay last season, losing 2-1 before winning 12-0 and 10-5, but the Phoenix still lead the all-time series 17-9.  Valpo pitchers Alex Lagesse and Sam McGee are a combined 7-1 over their careers against the Phoenix with a combined 1.11 ERA.  Offensively, Sara Strickland is 12-for-20 with six doubles over the last two seasons against Green Bay, while Jordan Rutkowski went 6-for-11 last season with two homers, four runs scored and four RBIs.

A Warm Debut: Valparaiso played its earliest home opener in program history last week, hosting a twinbill against IUPUI at the Valparaiso University Softball Field on Tuesday, March 20.  Despite being early in meteorological spring, however, it was the warmest temperatures the Crusaders have had for a home game since weather became a part of the official box score in 2009, as the first pitch temperature for game one was 83 degrees.

Multiple Winning Streaks: Valpo enters this week on a five-game winning streak after sweeping all five games last week, the second time this season the Crusaders have won at least five in a row.  Valpo previously won six in a row from Feb. 25 through March 3, and head coach Jordan Stevens has now guided the Crusaders to four winning streaks of at least five games in his first two seasons.

See the Ball, Hit the Ball: The Crusader offense tallied 43 runs in the five victories last week, scoring at least seven runs in every game to continue its season-long success at the plate.  Valpo has now scored at least six runs in 15 of its 26 games, going 14-1 in those contests.  The Crusaders are averaging 6.31 runs/game on the season, good for 15th nationally, and also rank among the nation’s top-25 offensively in doubles/game (1.69, 6th), slugging percentage (.518, 14th), home runs/game (1.12, 18th) and batting average (.318, 23rd).

Consistency in the Field: Alex Lagesse, Sam McGee and the rest of the Valpo pitching staff have taken the circle knowing they have one of the nation’s most consistent defenses behind them in the field all season long.  The Crusaders’ team fielding percentage of .974 easily paces the Horizon League and ranks 22nd nationally.  Valpo committed just one error last week in its five victories and boasts 12 errorless games on the season.

Winning by Run Rule: The Crusaders’ series finale against Detroit came to an end via run rule after five innings, as Valpo scored two runs in the fifth frame to secure the eight-run margin.  The victory was the fourth this season by run rule for Valpo, which has yet to be on the wrong end of a shortened victory.  Last season, the Crusaders won eight games by run rule (three of which came versus this week’s opponents) and lost three times.

Strong Start to League Play: Valpo’s three-game sweep of Detroit last weekend was nothing new for the Crusaders.  Each of the last four years has seen Valpo start off Horizon League action with at least three consecutive victories, while the Crusaders will look to challenge the 2010 squad’s mark of six straight wins to start league play this year.

League Honorees: Through six weekends of play, the Crusaders already have tallied five Horizon League weekly award winners.  Most recently, redshirt sophomore Jessie Marinec received her second career Player of the Week honor on March 13.  Senior Jordan Rutkowski has twice been named Player of the Week this year, while freshman Brittany Duncan was named the Player of the Week and senior Alex Lagesse Pitcher of the Week (her sixth career award, fifth-most in league history) after the season’s opening weekend.

Speaking of Charts...: Rutkowski’s stellar campaign has propelled her towards the top of Valpo’s career charts in a number of categories.  The senior already held Valpo’s all-time record for RBIs entering the season and now has 135 career driven in, 37 more than anybody else in Crusader history.  She also has broken the career home runs record this year (27) and ranks second all-time in batting average, slugging and on-base percentages, runs and hits; third in walks; and fourth in stolen bases.  Then, despite being just halfway through the 2012 season, Rutkowski is already tied for third on the single-season home run chart with nine, just two off the record, and is already sixth in single-season RBIs with 34, eight away from matching the mark.

You’re Not Gonna K Me: Senior Sara Strickland has proven to be one of the nation’s most difficult players to strike out this season.  Strickland went down swinging in the fourth game of the season against Drake, and then struck out swinging in her first at-bat at #5 Arizona State March 9, her only two Ks of the season.  The senior’s average of 38 at-bats per strikeout ranks her 18th toughest to K nationwide.  Impressively, Strickland is tied for the team lead in walks (13) and has also been hit by pitches three times while striking out just twice.

Battle For the Top: Strickland and Rutkowski combine to lead the Crusaders all-time in nearly all the program’s offensive categories, but the duo will be fighting to top the charts the rest of the way in at least one field.  Strickland entered the season as Valpo’s all-time leader in total bases, but Rutkowski’s extraordinary first half of the year has the duo tied with 314 career total bases apiece.

Marinec Enjoys Big Week: Redshirt sophomore Jessie Marinec had more games last week in which she reached base in all her plate appearances (3) than games in which she made an out (2).  On the week, Marinec went 9-for-12 with three walks, three doubles, six runs scored and three RBIs as the Crusaders went 5-0.  The sophomore, who is now hitting .403 on the season, continues a stretch of hot hitting dating back to the start of the week she earned Player of the Week honors from the HL office.  Over Valpo’s last 13 games, Marinec is hitting .514 (18-of-35) with 13 runs scored, 10 RBIs, three doubles and four home runs.

Production From the Cleanup Spot: Almost as impressive as Marinec over the last 13-game stretch has been the hitting of freshman designated player Brittany Duncan.  Over that same group of games, Duncan is 15-for-31 (.484) with three doubles, two home runs, six walks, two HBP and 12 RBIs.  Last week saw the freshman stand out especially in the opening of Horizon League play, as Duncan torched the Titans to the tune of an 8-for-11, 6-RBI weekend.

Phalen on the Verge: Senior Kelsey Phalen has continued to have a solid final season at the plate, raising her batting average to .320 last week after going 7-for-15 with five runs scored over Valpo’s five wins.  Phalen finds herself on the verge of setting a new Crusader career record not at the plate this week, but in the field, as the senior enters the week with 1,024 career putouts, just 12 behind Beth Adamski’s all-time Valpo record.  Phalen recorded just 39 putouts in 30 games at shortstop as a freshman before suffering a season-ending injury and moving to first base for the final three years of her career.

Hot Corner on Lockdown: Redshirt junior Joylyn Ichiyama-Drewry hasn’t missed a beat in her return to the Crusader lineup this year after redshirting in 2011.  Ichiyama-Drewry ranks among the league’s top five in triples, home runs and total bases, and last week posted her first career four-hit game in the series-opening win at Detroit, just Valpo’s second four-hit game of the season.  In the field, Ichiyama-Drewry has held down third base, as she leads the league in assists with 75 while committing just three errors on the season.

Keep Them Off the Scoreboard: Not to be overlooked with the offensive output last week is the job the Crusader pitching staff did, posting a combined 1.06 ERA while allowing opponents to hit just .207 against them over the five games.  Alex Lagesse surrendered just four runs in 19 innings over three complete games, striking out 11, and has given up more than two earned runs in just three of her 14 starts this year.  Meanwhile, Sam McGee pitched 13.2 innings while giving up just one earned run last week and has posted a 1.17 ERA over her last four appearances.  McGee also now has 47 career wins, just three shy of the Crusaders’ all-time record in that category.