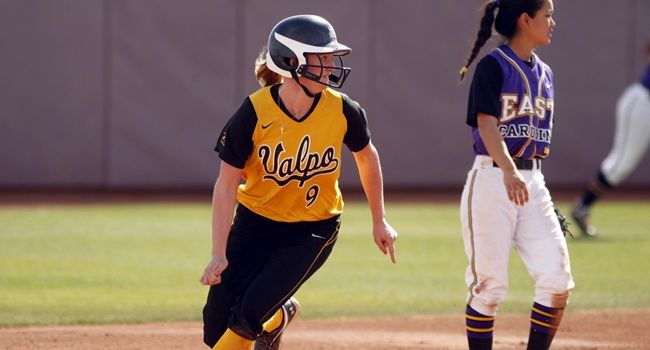 Next Up in Crusader Softball: Valparaiso returns to Horizon League play this week with a pair of three-game league series, hitting the road to take on Wright State in mid-week action before returning home to host Youngstown State this weekend.

Previously: Valparaiso had a light week last week, partaking in just a mid-week doubleheader at Bowling Green.  The Crusaders’ pitching and defense shut down the Falcons, hosting them scoreless over 14 innings as Valpo earned a pair of shutout wins by 4-0 and 5-0 scores.

Following the Crusaders: Live stats for all six games this week will be available through www.valpoathletics.com.  Valpo’s campus radio station, WVUR (95.1 FM), will continue its spring broadcast schedule by carrying all three games of the Youngstown State series live over its airwaves.  WVUR’s broadcast will also be carried via webcast on the Valpo Athletics site as well.

Head Coach Jordan Stevens: Jordan Stevens is in his second season at the helm of the Valparaiso University softball program in 2012 after leading the Crusaders to a successful season in his first year in charge in 2011.  Stevens, who now owns a record of 56-31-1 at the helm of the Crusaders, guided Valpo to 34 victories in his debut campaign, just one win shy of the program's single-season record.  Valpo finished Horizon League play with a 15-7 record, finishing just one-half game out of the regular season championship, and was within one run of advancing to the league tournament championship.

Series Notes: Wright State - The Crusaders own a slight 12-10 lead in the all-time series over the Raiders, thanks to a sweep of a three-game set in Valpo last season by scores of 2-1, 11-1 and 4-2.  Angie Doerffler went 6-for-10 with five runs scored over the three games, while Jordan Rutkowski went 5-for-10 with six RBIs.
Youngstown State - Valpo is 19-5 all-time in the series against the Penguins, including a doubleheader sweep in Youngstown last season, defeating YSU 4-2 and 14-11.  Jordan Rutkowski hit a two-run homer to give the Crusaders the lead with two outs in the seventh in the opener, while Doerffler and Alex Lagesse each picked up three hits in the nightcap.

Multiple Winning Streaks: Valpo enters this week on a five-game winning streak after taking a twinbill from Bowling Green last week, the third time this season the Crusaders have won at least five in a row.  Valpo previously won six in a row from Feb. 25 through March 3 and five in a row from March 20 through March 25, and head coach Jordan Stevens has now guided the Crusaders to five winning streaks of at least five games in his first two seasons.

Great Start to League Play: The Crusaders’ three-game sweep of Green Bay two weekends back pushed Valpo’s record in Horizon League play to a perfect 6-0, as it also had swept a three-game set from Detroit the previous record.  Six straight wins to open league action matched the Crusaders’ best start to league play in program history, as the 2010 Valpo squad also won the first six games of its Horizon League slate.

Record Margin: Valpo’s performance in the nightcap of the Saturday doubleheader against Green Bay set a new program record for largest margin of victory in a single game.  The Crusaders defeated the Phoenix by 17 runs, surpassing the previous mark of 16 set on April 2, 2010 when Valpo downed Detroit, 18-2.

Putting Up Runs: The Crusaders have boasted a high-octane offense all season long, but took it to the highest level in the 17-0 win over the Phoenix.  Valpo’s 17 runs matches the third-most in a single game in program history (4/21/84 vs. Illinois Insitute of Technology; 3/30/11 at Northern Illinois) and was just one run shy of the single-game record.  In addition, Valpo plated 12 runs in the fourth inning of that contest, the highest known single-inning tally all-time at Valpo.

See the Ball, Hit the Ball: The Crusader offense has continued its season-lnog success at the plate since returning from its spring break trip, scoring 84 runs in the last 11 games, including 57 runs over their first six Horizon League contests.  Valpo has now scored at least six runs in 17 of its 32 games, going 16-1 in those contests.  The Crusaders are averaging 6.41 runs/game on the season, good for 11th nationally, and also rank among the nation’s top-25 offensively in doubles/game (1.75, 3rd), slugging percentage (.519, 11th), batting average (.328, 13th) and home runs/game (1.03, 23rd).

Consistency in the Field: Alex Lagesse, Sam McGee and the rest of the Valpo pitching staff have taken the circle knowing they have one of the nation’s most consistent defenses behind them in the field all season long.  The Crusaders’ team fielding percentage of .978 easily paces the Horizon League and ranks 7th nationally.  Valpo had an errorless twinbill against Bowling Green last week, giving the Crusaders a streak of seven straight errorless games, and has recorded just one error in 11 games since returning from its spring break trip.

A Warm Debut: Valparaiso played its earliest home opener in program history this season, hosting a twinbill against IUPUI at the Valparaiso University Softball Field on Tuesday, March 20.  Despite being early in meteorological spring, however, it was the warmest temperatures the Crusaders have had for a home game since weather became a part of the official box score in 2009, as the first pitch temperature for game one was 83 degrees.

Winning by Run Rule: The Crusaders won both their games two Saturdays ago  against Green Bay via run rule, ending the first on a walk-off homer in the bottom of the sixth before cruising to the shortened win in the nightcap.  The victories were the fifth and sixth this season by run rule for Valpo, which has yet to be on the wrong end of a shortened victory.  Last season, the Crusaders won eight games by run rule and lost three times.  Since joining the Horizon League, Valpo boasts a 19-3 record in league games shortened via run rule.

A Rare Comeback: Valpo’s offense has been dominant enough for most of the season that the Crusaders haven’t had to come from behind for wins, but that’s what happened in the finale against Green Bay, as Valpo scored four in the bottom of the sixth to erase a three-run deficit.  It was the Crusaders’ largest comeback of the year and just the fourth time they’ve trailed at any point in a victory this year, while also marking their first win after trailing through four and five innings.

Keeping a Clean Sheet: While the Crusaders’ pitching staff has been solid all year, boasting the second-best team ERA in the Horizon League, Valpo had recorded just one shutout in the season’s first 27 games.  That has changed over the last five games, however, as Alex Lagesse and Sam McGee have registered shutouts in both ends of Valpo’s last two doubleheaders, against Green Bay and at Bowling Green.

Best Start Ever: Valpo’s six-game winning streak early in the season pushed the club to a 10-2 record through 12 games, marking the first time in program history the Crusaders had suffered just two losses through their first 12 contests.  While Valpo lost at UTEP to end its winning streak, the win at New Mexico State moved the Crusaders to 11-3 through 14 games for just the second time in program history, matching the 2010 squad which set the program record with a 35-win season.

League Honorees: Through seven weekends of play, the Crusaders already have tallied six Horizon League weekly award winners.  Most recently, senior Jordan Rutkowski earned her third Player of the Week of the season on April 2 for her performance against Purdue and Green Bay.  Redshirt sophomore Jessie Marinec received her second career Player of the Week honor on March 13, while freshman Brittany Duncan was named the Player of the Week and senior Alex Lagesse Pitcher of the Week (her sixth career award, fifth-most in league history) after the season’s opening weekend.

Caution, Falling Records: Senior catcher Jordan Rutkowski has already started to match or break Valpo and Horizon League single-season records despite there being more than 20 games remaining in the regular season.  A three-time HL Player of the Week this year, Rutkowski has matched Valpo’s single-season home run record (11) and broken the single-season RBI record (now at 44) this year.  On the career charts, the catcher already held Valpo’s all-time record for RBIs entering the season and now has 145 career driven in, 47 more than anybody else in Crusader history.  She also has broken the career home runs (29) and total bases (333) records this year and ranks second all-time in slugging and on-base percentages, runs and hits; third in batting average and walks; and fourth in doubles and stolen bases.

Among the Nation’s Best: Rutkowski has maintained her spot among the national leaders in a number of categories all season long.  Rutkowski, who currently paces the Horizon League in five different offensive categories, is hitting .475 on the year, good for sixth nationally, while she also ranks among the top-20 in the nation in RBIs/game (1.38, 7th), doubles/game (0.38, 6th), slugging percentage (.921, 7th) and home runs/game (0.34, 21st).  In fact, Rutkowski is the only player nationally to rank among the top-10 in the first four categories.

Marinec Continues Hot Hitting: Redshirt sophomore Jessie Marinec was the offensive impetus for the Crusaders at Bowling Green, combining to hit for the cycle over the two games while going 5-for-6 with two runs scored and four RBIs.  Marinec, who now ranks second in the league and 18th nationally with a .435 batting average, has hits in 10 of Valpo’s 11 games since returning from the spring break trip and is hitting an incredible .633 (19-of-30) with 10 R and 11 RBI over that stretch.

You’re Not Gonna K Me: Senior Sara Strickland has proven to be one of the nation’s most difficult players to strike out this season.  Strickland went down swinging in the fourth game of the season against Drake, and then struck out swinging in her first at-bat at #5 Arizona State March 9, her only two Ks of the season.  The senior’s average of 48.5 at-bats per strikeout ranks her seventh toughest to K nationwide.  Impressively, Strickland has combined to reach 16 times on walks/HBPs while striking out just twice.

Freshman Lights Up the League: Freshman designated player Brittany Duncan has had a pair of huge weekends to open her career within the Horizon League.  In the three-game sweep of Green Bay two weekends ago, Duncan went 4-for-6 with three walks, two doubles, two runs scored and a pair of RBIs.  Through the first six league games, Duncan is now 12-for-17 (.706) with four extra-base hits and eight runs driven in.

Standout Hurlers: Seniors Alex Lagesse and Sam McGee have combined to surrender just 15 runs over 11 games since the Crusaders returned from spring break as Valpo has gone 10-1 in its last 11.  Lagesse is 6-1 with a 1.56 ERA over that stretch and leads the Horizon League with 11 wins, while McGee has a miniscule 0.27 ERA and is a perfect 4-0 over that span, giving her 49 career wins, just one shy of Valpo’s career record in the category.