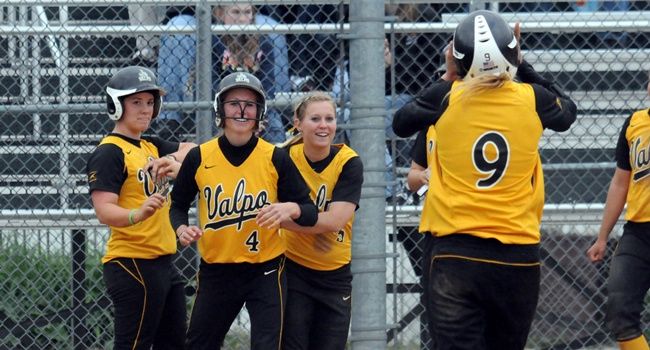 Trailing by 12 runs after two innings of the nightcap Saturday afternoon at the Valparaiso University Softball Field, Valparaiso stormed back with 13 straight runs, capped by a walk-off single in the bottom of the seventh from Jessie Marinec (Alsip, Ill./Marist), to set a program record for the largest come-from-behind victory as it earned a 13-12 win over Youngstown State. The comeback win closed out a doubleheader sweep as Valpo also captured game one, 4-3.

“I'm really proud of the team for the way they fought back in the second game today,” said Crusader head coach Jordan Stevens. “Right after Youngstown scored 11 in the first, the first thing out of our players' mouths was that we just had to chip away at it. I give them a ton of credit, because that's not an easy feat.”

The second game of the day got off to an awful start for the Crusaders, as starter Alex Lagesse (Beecher, Ill./Beecher) was able to retire just one of the six YSU hitters she faced. Reliever Shaleigh Jansen (Ottawa, Ill./Ottawa Township) was roughed up as well in the opening frame, while Valpo also committed a pair of errors as 15 YSU batters in all came to the plate in the first, scoring 11 runs on nine hits. The Penguins added a run in the second as well to stake themselves to a 12-0 lead through two frames.

Valpo started to knock away at the lead bit by bit, starting in the third inning. With the bases loaded and none out, senior Sara Strickland (Scottsdale, Ariz./Horizon) delivered an RBI single through the right side to score Amanda Wisniewski (Lake in the Hills, Ill./Huntley) and get Valpo on the board. Three batters later, with the bases still loaded and two away, redshirt junior Joylyn Ichiyama-Drewry (Torrance, Calif./Redondo Union) stepped up and drove a 1-2 pitch to the wall in left-center, clearing the bases with a three-RBI double and bringing the Crusaders within 12-4.

It was Strickland who drove home the first run of the fourth inning as well, lining a double into the right-center gap to again score Wisniewski. Two batters later, the bases were loaded for senior Jordan Rutkowski (Alden, N.Y./Alden), who drew a five-pitch walk which forced home sophomore Angie Doerffler (Fort Wayne, Ind./Concordia Lutheran). Then, with two outs, senior Kelsey Phalen (Batavia, Ill./Batavia) took the first pitch she saw right back through the middle, plating Strickland to cut Valpo's deficit to 12-7.

Then, the fifth inning saw Valpo slice the margin down to just one run. Again, Strickland delivered the first run-scoring blow of the frame, drilling a bases-loaded double off the wall down the right-field line which narrowly missed leaving the yard for a grand slam to bring in two runs. The senior would eventually score on a wild pitch, and the wildness from YSU reliever Casey Crozier paid off later in the frame as well, as freshman Brittany Duncan (Fairborn, Ohio/Fairborn) moved up to second on the wild pitch which scored Strickland and completed the journey around the bases by advancing on two more wild pitches, pushing the Crusaders to within 12-11.

It looked like the Crusaders might be kept off the scoreboard in the sixth, as Doerffler grounded a ball to short with Marinec on second and two out. But YSU's shortstop threw wide of first base in her attempt to force Doerffler, allowing Marinec to scamper all the way around to tie the game at 12-all. Finally, the walk-off run would come in the bottom of the seventh, as with one out, Rutkowski was hit by a pitch, Ichiyama-Drewry lined a single down the right-field line and Phalen was walked to load the bases for Marinec. The redshirt sophomore delivered the winning base knock, grounding a single through the drawn-in infield to score Rutkowski and give Valpo the improbable win.

Jansen earned the win with her 6.2 innings of relief, giving up just one earned run among the seven runs she surrendered. The senior, who threw 1-2-3 innings in four of the final five frames, improved to 4-1 on the year. YSU starter Kayla Haslett took the loss, falling to 5-5 after giving up nine runs in five total innings of work. Strickland went 3-for-5 with three runs scored and four RBIs in the wild win, while Doerffler and Ichiyama-Drewry also had multi-hit games.

“If Shaleigh doesn't throw five scoreless innings for us, all the offense wouldn't have mattered,” said Stevens. “If we had allowed Youngstown to get the momentum back, it could have changed things, but Shaleigh just came in and shut them down. We got three quick outs every inning, which just allowed our offense to continue to roll.”

The big blow in the opener came from Phalen in the sixth inning, as the senior stepped into the box with the score tied at one in the sixth inning and drove the first pitch she saw deep over the center-field fence for a three-run homer, giving the Crusaders a 4-1 lead. YSU had opened the scoring in the first with an RBI groundout, while Phalen had scored the Crusaders' only run going into the sixth, walking in the fourth before scoring on an RBI double by Wisniewski.

YSU had a rally in it in the seventh inning, scoring a pair of runs to close the gap to one run. The Penguins had the potential tying run on second with two outs in the inning, but the Crusaders went to Jansen out of the bullpen and the senior induced a lineout to Phalen to end the win in the opener.

Lagesse improved to 13-6 with the win in the first game of the day, going 6.2 innings, while Jansen picked up her second save of the year by registering the final out. Crozier took the complete-game loss for Youngstown State (21-11-1, 5-6 Horizon), falling to 9-5 on the season. Phalen scored two runs and drove in three to lead the Valpo offense in the opener.

Valparaiso (27-10, 11-0 Horizon) looks to remain undefeated in league play and close out the series sweep on Sunday at noon from the Valparaiso University Softball Field. All the action can be heard live on WVUR, 95.1 FM, Valparaiso and online at www.valpoathletics.com, which will also have a link for live stats.