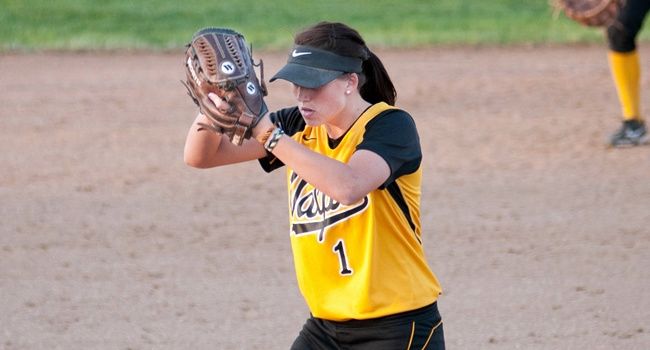 Senior Sam McGee (Bloomington, Minn./Jefferson) scattered six hits in a complete-game shutout to set the Crusader career record for wins by a pitcher, while Valparaiso used a five-run third inning offensively to propel itself to a 7-0 victory over Youngstown State Sunday at the Valparaiso University Softball Field. The win concluded a three-game sweep of the Penguins, extended the Crusaders' winning streak to 11 straight games and improved Valpo's Horizon League record to 12-0.

“I thought it was important we kept Youngstown State off the board early today,” said Crusader head coach Jordan Stevens. “We felt like they were going to come out even stronger than they did yesterday, feeling that they needed to get a win out of this series. It was really key for us to get off to a good start and shut them down.”

McGee, who missed both of Valpo's games on Saturday due to an academic obligation, did not walk a batter in her shutout effort to record her fourth straight complete-game shutout. The senior, who has not allowed an earned run since March 20, earned her 51st career victory to break a tie with Laura Pajakowski atop the Crusaders' career list in the category. McGee escaped a pair of slight jams on Sunday to earn the shutout, inducing a groundout and a flyout with a runner on third and one out in the first and pitching around back-to-back bunt singles with one out in the third.

“It was another really good outing from Sam today,” said Stevens. “She really was in no real danger throughout the game, and it was just another game in which she was in control of herself and her pitches.”

The game was still scoreless entering the bottom of the third, despite the Crusaders drawing three walks over the first two innings. Valpo's patience would finally pay off in the third inning, however. Sophomore Amanda Wisniewski (Lake in the Hills, Ill./Huntley) walked on a full-count pitch to lead off the frame, and after a pair of outs, senior Sara Strickland (Scottsdale, Ariz./Horizon) and freshman Brittany Duncan (Fairborn, Ohio/Fairborn) drew back-to-back walks on full-count pitches to load the bases with two away.

Senior Jordan Rutkowski (Alden, N.Y./Alden) stepped up and worked a full count as well before swinging the bat on a 3-2 pitch, lining a pitch into left field to score both Wisniewski and Strickland without any play at the plate, giving the Crusaders a 2-0 lead. Redshirt junior Joylyn Ichiyama-Drewry (Torrance, Calif./Redondo Union) followed by connecting on yet another full-count pitch, lifting a fly ball beyond the left fielder's grasp for a 2-RBI double, plating both Duncan and Rutkowski. Senior Kelsey Phalen (Batavia, Ill./Batavia) then drove a 1-1 pitch to the fence in right field for a two-bagger which scored Ichiyama-Drewry, capping the five-run inning to give Valpo the 5-0 lead.

A pair of home runs would cap the scoring for the Crusaders. With one out in the sixth, Duncan absolutely demolished the first pitch she saw, clearing not only the 200-foot fence in right field, but also the 15-foot high fence protecting the tennis courts 50 feet beyond the softball fence on a solo blast estimated at 275 feet for her fifth round-tripper of the season. Then with two outs in the sixth, junior Tori Brown (Harrison, Ohio/Harrison) connected for her first extra-base hit of the year, sending a 1-1 pitch off the scoreboard beyond the left-center fence for a solo homer which capped the scoring.

McGee improved to 11-2 this season with the complete-game effort, while her starting counterpart, Hana Somogyi, fell to 6-2 for Youngstown State (21-12-1, 5-7 Horizon) after giving up five runs in 2.2 innings of work. No Crusader tallied a multi-hit game, as Valpo picked up just six hits on the afternoon, but five Crusaders reached base twice as Valpo utilized six walks offensively as well. Duncan scored two runs, while Ichiyama-Drewry and Rutkowski each drove in a pair.

“We had good plate discipline today,” said Stevens. “We didn't help [Somogyi] too much by chasing pitches, and I felt that was important.”

Valparaiso (28-10, 12-0 Horizon) steps out of league play briefly on Wednesday afternoon for a single game at Notre Dame. First pitch is scheduled for 4 p.m. CDT, and the game will be broadcast live on WVUR, 95.1 FM and online at www.valpoathletics.com, which will also have links for live stats and a live chat.