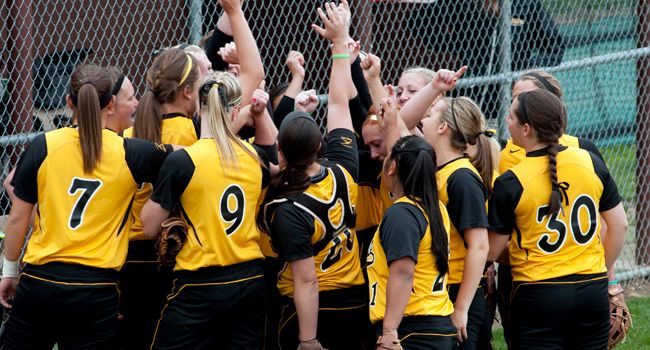 Next Up in Crusader Softball: Valparaiso has four road games on the docket this week, none of which require a long trip away from its Northwest Indiana campus.  The Crusaders, who have won 11 straight contests, will travel east on the Toll Road to take on Notre Dame in a single game Wednesday afternoon before heading up to Chicago for a three-game Horizon League series against UIC this weekend as they attempt to remain unbeaten in league action.

Previously: The Crusaders needed to work from behind more often than they’ve been used to this season, but in the end, they remained unbeaten in Horizon League play and extended their overall winning streak to 11 games with six league victories last week.  Valpo made it eight straight road wins by going to Wright State and sweeping a three-game set by scores of 4-2, 10-0 and 8-6, the latter of which required a rally from a four-run deficit.  The Crusaders then returned home and swept Youngstown State 4-3, 13-12 and 7-0, highlighted by a remarkable comeback from a 12-0 deficit after two innings in the middle game.

Following the Crusaders: Live stats for all four games this week will be available through www.valpoathletics.com, while there will also be live interactive chats available for all four contests.  Valpo’s campus radio station, WVUR (95.1 FM), will continue its spring broadcast schedule by carrying the Notre Dame game live over its airwaves.  WVUR’s broadcast will also be carried via webcast on the Valpo Athletics site as well.

Head Coach Jordan Stevens: Jordan Stevens is in his second season at the helm of the Valparaiso University softball program in 2012 after leading the Crusaders to a successful season in his first year in charge in 2011.  Stevens, who now owns a record of 62-31-1 at the helm of the Crusaders, guided Valpo to 34 victories in his debut campaign, just one win shy of the program's single-season record.  Valpo finished Horizon League play with a 15-7 record, finishing just one-half game out of the regular season championship, and was within one run of advancing to the league tournament championship.

Series Notes: Notre Dame - Valparaiso trails the all-time series with Notre Dame, 31-11, but most of Valpo’s wins came in the early to mid ‘80s, as the Irish have won the last 30 meetings.  The Crusaders dropped a matchup at Notre Dame last season on May 3, 10-2 in six innings.
UIC - The Flames enjoy a large 52-10 edge all-time against Valpo, but the Crusaders and Flames have split ten contests since Valpo joined the Horizon League prior to the 2008 campaign.  Last season, it was UIC which took two out of three games April 2-3, winning the opener 4-1 and the series finale 17-6, while Valpo earned a 5-2 win in the series’ middle game.  Sara Strickland is 8-for-20 with six runs scored all-time against UIC, while Jordan Rutkowski is 7-for-17 with eight RBIs against the Flames.

Double-Digit Winning Streak: For just the second time in program history, the Crusaders find themselves with a winning streak that has reached double digits.  Valpo enters this week having won 11 straight games, trailing just last year’s squad, which won 13 straight at one point, for the longest winning stretch all-time.  The Crusaders, who have not lost since a one-run defeat against Purdue on March 29, are hitting .362 over the 11-game streak and averaging 7.64 runs/game while surrendering just 2.36 runs/game.

Multiple Streaks: The current 11-game winning streak marks the third time this season that the Crusaders have won at least five in a row.  Valpo previously won six in a row from Feb. 25 through March 3 and five in a row from March 20 through March 25, and head coach Jordan Stevens has now guided the Crusaders to five winning streaks of at least five games in his first two seasons.

Historic League Start: The three-game sweeps of both Wright State and Youngstown State last week continue a historic start to the Horizon League campaign for the Crusaders.  Valpo is now 12-0 in league play, the second-longest stretch of wins to start league play in HL history.  Only the 1997 UIC squad, which went 14-0 in Horizon League action, won more consecutive games to start off the league season.

Comeback Kids: After needing to rally from any sort of deficit in just four of its first 22 victories this season, Valpo found itself with four come-from-behind wins out of its six last week.  Three out of those four wins came with the Crusaders down after four innings, a situation in which they were just 1-8 entering last week.  Among the comeback victories was a rally from a 6-2 deficit through four innings at Wright State, but even that would pale in comparison to what happened two days later...

The Record Rally: Given that the first game of Saturday’s twinbill against YSU was a 4-3 decision, nobody could have seen coming what happened in the nightcap.  The Penguins torched Valpo for 11 first-inning runs and added another tally in the second to go up 12-0 through two frames.  But that only set the stage for the largest come-from-behind win in Crusader softball history and what is believed to be the largest comeback in NCAA Division I softball this season.  Valpo scored four in the third, three in the fourth and four in the fifth to cut the deficit to just one run before scoring one in the sixth to tie it and getting a walkoff single in the seventh for the 13-12 win.  The 12 runs also marks the most Valpo has ever surrendered in a victory.

See the Ball, Hit the Ball: The Crusader offense has continued its season-long success at the plate since returning from its spring break trip, scoring 130 runs in the last 17 games, including 103 runs over their first 12 Horizon League contests.  Valpo has now scored at least six runs in 21 of its 38 games, going 20-1 in those contests.  The Crusaders are averaging 6.61 runs/game on the season, good for eighth nationally, and also rank among the nation’s top-30 offensively in doubles/game (1.87, 3rd), batting average (.330, 8th), slugging percentage (.520, 12th) and home runs/game (1.00, 26th).

One Time Through the Order: Since returning from the spring break trip, it’s seemed as if the Crusaders need one trip through the batting order to get settled offensively.  Over the 17-game stretch, in which Valpo holds a 16-1 record, the Crusaders are hitting just .218 and have scored just 13 runs the first time through the lineup.  But after that point, Valpo is hitting an incredible .415 and has scored 117 runs the remainder of the games.

Winning by Run Rule: The Crusaders won the middle game of their three-game set at Wright State 10-0 in six innings, their seventh victory via run rule this season.   Valpo still has yet to be on the wrong end of a shortened victory in 2012.  Last season, the Crusaders won eight games by run rule and lost three times.  Since joining the Horizon League, Valpo boasts a 20-3 record in league games shortened via run rule.

Giving Up Nothing: While the Crusaders’ pitching staff has been solid all year, boasting the best team ERA in the Horizon League, Valpo had recorded just one shutout in the season’s first 27 games.  That has changed over the last 11 games, however, as Alex Lagesse and Sam McGee have combined to record six shutouts over that stretch.

McGee’s Shutout Streak...: Senior Sam McGee earned her first career Pitcher of the Week honor from the Horizon League office after tossing shutouts last week in game two at Wright State (6 IP, 5 H, 0 BB, 4 K) and game three versus YSU (7 IP, 6 H, 0 BB, 2 K).  The pair of shutouts gives McGee four consecutive shutouts in her last four starts, a stretch of 25 consecutive innings.  The senior also has not given up an earned run since March 20, a stretch of 33 innings since last surrendering an earned tally.

...and a Record Win: The win over the Penguins on Sunday also marked the 51st of McGee’s Crusader career, breaking Valpo’s previous career record of 50 wins held of Laura Pajakowski.  McGee won nine games in the circle for Valpo as a freshman, 14 as a sophomore and 17 as a junior.  The victory over YSU improves McGee’s record this season to 11-2, as her only losses have come in the season opener against UNI and at national powerhouse Arizona State.

National Player of the Year Finalist: Senior catcher Jordan Rutkowski was one of just 25 softball players nationwide on the Finalist list for the 2012 USA Softball Collegiate Player of the Year honor, which came out last week.  Rutkowski is the only Horizon League player on the list, which is dominated by players from major college programs.  The senior, who currently paces the Horizon League in five different offensive categories, is hitting .452 on the year, good for eighth nationally, while she also ranks among the top-25 in the nation in RBIs/game (1.34, 5th), doubles/game (0.37, 7th), slugging percentage (.887, 10th) and home runs/game (0.32, 25th).  In fact, Rutkowski is the only player nationally to rank among the top-10 in the first four categories.

Marinec Continues Hot Hitting: Redshirt sophomore Jessie Marinec continues to stand out at the plate for the Crusaders as well in 2012.  Marinec went 9-for-21 over Valpo’s six wins last week and is now hitting .434 on the season, good for third in the Horizon League and 20th nationally.  In Valpo’s 17 games since returning from spring break, a stretch in which the Crusaders have gone 16-1, Marinec has led the way, hitting .549 (28-of-51) with 15 runs scored and 12 RBIs.

Strickland Steps Up: Senior Sara Strickland has been a bit overshadowed in the Crusaders’ lineup this year, but was the big impetus in Valpo’s epic comeback win over YSU last Saturday.  Strickland went 3-for-5 with three runs scored and four RBIs in the 13-12 win over the Penguins, and on the week went 8-for-16 with five walks, seven runs, five RBIs and three doubles.  The senior, who is hitting .394 with 13 runs scored over Valpo’s 11-game winning streak, has already scored 35 runs this year, second on the team and just 11 behind her own single-season record.

Sterling Rookie Season: Freshman Brittany Duncan has been a huge asset in the cleanup spot in the lineup for Valpo this year.  Duncan ranks among the top-seven in the Horizon League and leads all league freshmen in batting average (.370), on-base percentage (.457), slugging percentage (.593) and RBIs (30).  In league-only play, Duncan is hitting an even .500 (18-for-36) with eight walks while driving in 14 runs.

Joy Drives Them Home: Redshirt junior Joylyn Ichiyama-Drewry had a standout week at the plate last week.  Ichiyama-Drewry went 8-for-19 (.421) with 10 RBIs over the six games, recording multiple RBIs in four games, including a big three-run homer in the come-from-behind win over Wright State.  The junior, who also picked up four doubles on the week, ranks third in the Horizon League in RBIs (32) and also is among the top-five in home runs, slugging percentage and total bases.