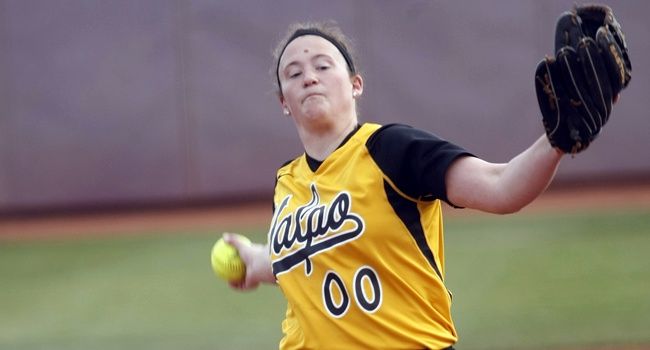 A scoreless duel which stretched into extra frames wouldn’t end in Valparaiso’s favor Sunday, as UIC earned a walk-off, 1-0 win in nine innings in Chicago, Ill. in the finale of the three-game series.

Both teams had numerous chances to push across a run prior to the game’s only tally, as the Crusaders left eight runners on base while UIC left eight on as well in the first eight innings.  The first inning saw a scoring chance for both sides, as both Valpo and UIC placed a runner on third with one out.  But the Crusaders saw their threat gunned down at the plate to complete a double play after a fly out to left, while Valpo starter Alex Lagesse (Beecher, Ill./Beecher) induced a pair of pop-ups to escape the Flames’ threat.

Valpo found itself with a premium chance in the fourth, as with one out, senior Sara Strickland (Scottsdale, Ariz./Horizon) drew a five-pitch walk.  Freshman Brittany Duncan (Fairborn, Ohio/Fairborn) followed with a line drive single into right, and senior Jordan Rutkowski (Alden, N.Y./Alden) walked on four straight pitches to load the bases with just one away.  But a pop out, followed by a strikeout looking kept the game rolling along scoreless.

UIC placed two runners on with just one out in its half of the fourth, but Lagesse went to third to force the lead runner on a grounder back to the circle and then got a fly out to left for the final out.  Then, facing runners on second and third with two outs in the fifth, Lagesse induced a grounder to third to keep the shutout going.  The Flames drew a leadoff walk in the sixth, but redshirt junior Joylyn Ichiyama-Drewry (Torrance, Calif./Redondo Union) caught a line-drive bunt and was able to throw across the diamond to double up the UIC baserunner.

A one-out single by senior Kelsey Phalen (Batavia, Ill./Batavia) gave the Crusaders a baserunner in the final inning of regulation, but Valpo couldn’t advance the runner past first base.  UIC got a leadoff single from Melissa Preish in its half of the seventh and sacrificed her to second with one out, but she would remain there for the duration of the inning as the game headed into extra frames.

Playing extra innings for the second time in as many days, the Crusaders went down in order in the eighth, while Lagesse pitched around a one-out single in the bottom of the eighth.  The top of the ninth saw Valpo put together one of its best scoring opportunities of the game, as Duncan led off the frame with a single and Rutkowski was hit by a pitch to put two on with nobody out.  A perfect sacrifice by Ichiyama-Drewry moved both runners into scoring position with one away, but a pair of groundouts kept the Crusaders off the board.

UIC got a leadoff infield single from Kara Komp to lead off its half of the ninth, and Komp then stole second on the first pitch, as the throw was in time to catch her but wasn’t able to be corralled.  The Crusaders then intentionally walked Preish to set up a force at any base before Teresa Aguilar reached on a fielder’s choice grounder to short.  With the bases loaded and nobody out, Lagesse and Courtney Heeley dueled through a 10-pitch at-bat, with Heeley fouling off four full-count pitches before the tenth pitch was called a ball for a walk which forced in the game’s only run.

Lagesse fell to 13-7 on the year in taking the tough-luck loss, while Ashley Hewett improved to 8-11 for UIC (19-22, 7-7 Horizon) with the complete-game win.  Duncan registered two of Valpo’s four hits on Sunday, while Rutkowski drew a pair of walks and was also hit by a pitch.

Valparaiso (29-13, 13-2 Horizon) returns home for a key week with two Horizon League series at the Valparaiso University Softball Field next week.  First up is Butler, starting with a 3 p.m. doubleheader on Wednesday.  The games will be broadcast live on WVUR, 95.1 FM, Valparaiso, with live stats available through www.valpoathletics.com.