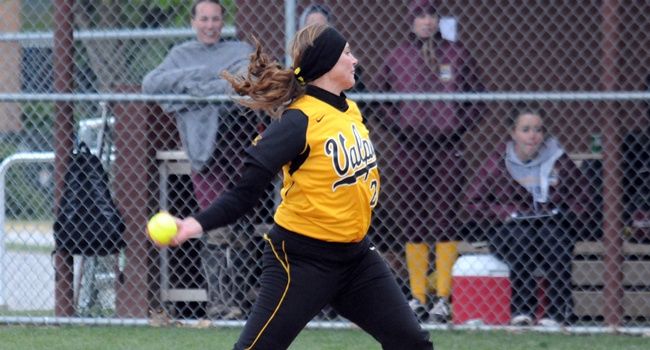 The Valparaiso softball team scrounged up just five hits on Saturday in dropping a Horizon League doubleheader to Loyola by scores of 3-2 (8 innings) and 4-1 at the Valparaiso University Softball Field.

“We have to be more care free up in the batter’s box,” said Crusader head coach Jordan Stevens.  “We're not going up with an aggressive mindset at the plate right now, and because of that, we’re getting ourselves in holes.  When a team has good pitchers like Loyola does, you can't put yourselves in those holes offensively.”

The Crusaders jumped on top in the opener in their first turn at bat.  Redshirt sophomore Jessie Marinec (Alsip, Ill./Marist) worked a full-count walk with two outs to become Valpo's first baserunner. With the hit-and-run on with a 1-1 count, freshman Brittany Duncan (Fairborn, Ohio/Fairborn) drilled a double to the right-center gap, easily enough to bring Marinec around with the game's first run.

While Valpo would not get a runner into scoring position over the next three innings, starting pitcher Alex Lagesse (Beecher, Ill./Beecher) was setting down Loyola in order.  Lagesse retired 10 in a row at one point from the first through the fourth innings and didn't allow a baserunner past second base over the first four frames, striking out five over that stretch.

Loyola's first hit of the ballgame would come in the fifth inning, tying the game.  Back-to-back two-out full count walks set up Brooke Andresen, who hit a soft liner into shallow left for a single to score Olivia Bell and tie the game.  The Ramblers took the lead later in the frame as a Crusader error permitted Keali Engelkens to score to make it 2-1 Loyola.  But it would take the Crusaders just two batters to even up the game again, as senior Kelsey Phalen (Batavia, Ill./Batavia) launched a one-out solo homer into the American flag waving over the scoreboard beyond the left-center fence to tie the game at two apiece.

Lagesse set down the Ramblers in order in the sixth and seventh inning, while Valpo went down 1-2-3 in the sixth.  The Crusaders had a solid scoring opportunity in the bottom of the seventh, as senior Jordan Rutkowski (Alden, N.Y./Alden) worked a one-out walk and stole second on the third pitch of the at-bat of senior Joylyn Ichiyama-Drewry (Torrance, Calif./Redondo Union).  Later in the plate appearance, Ichiyama-Drewry drove a full-count pitch to left center, but the ball hung up in the wind, giving the Loyola left fielder enough time to range over and make the grab for the second out.  Rutkowski moved up to third on the flyout, but after a Phalen walk, a strikeout ended the Crusader threat and sent the game into extra frames.

A bit of bad luck went against the Crusaders in the top of the eighth as Loyola scored the eventual game-winning run.  With one out, Jessica Balzano hit a slow roller to third which Ichiyama-Drewry charged and flung towards first.  The ball arrived at Phalen's glove at the same time as Balzano's body did, and the ball got knocked away down the line, allowing Balzano to reach safely on the hard-luck error and move up to second.  Annie Korth then knocked a single back up the middle off the glove of Crusader shortstop Angie Doerffler (Fort Wayne, Ind./Concordia Lutheran), easily enough to score Balzano with the go-ahead run.  Valpo would go down in order in its half of the eighth to end the game.

Lagesse took the tough loss for the Crusaders, falling to 14-8 despite surrendering just two hits and one earned run in eight innings while striking out 10 Loyola batters.  Brittany Gardner also allowed just two hits and struck out 10 for the Ramblers to improve to 16-8.

“Alex threw a really good game, and it’s frustrating we couldn't get her a win out of that because she pitched a gem,” said Stevens.  “It’s unfortunate that the mistakes we made in that game came at the wrong time and came grouped together.  But she threw really well - we have to find a way to get a win for her in a game like that.”

While the first game featured very little offense, Loyola got all the offense it would need in the nightcap within the first four batters.  An RBI single by Korth scored Andresen with the game's first run, and Lauren Moore followed with a two-run homer to give Loyola a quick 3-0 lead.  Andresen would come back up in the second inning and connect on a round-tripper of her own to push the Rambler edge to 4-0 after two innings.

Valpo placed runners on base in four of the first five innings, but could advance just one runner even to second base as it stranded five in the first five innings.  Finally, the Crusaders cracked the scoreboard in the sixth.  With one out, Duncan and Rutkowski were hit by pitches in consecutive plate appearances to put one on with one out.  Junior Hayley Bridwell (Lemont, Ill./Lemont), pinch-running for Duncan, would then scamper all the way around following a Loyola error on a play at second base on the next batter to cut the deficit to 4-1.  But a pair of groundouts with the tying run at the plate ended the sixth with the Crusaders still trailing by three, and Valpo could do nothing with a one-out walk in the seventh as the Ramblers completed the twinbill sweep.

Senior Sam McGee (Bloomington, Minn./Jefferson) took the loss in the nightcap, giving up all four runs in the start while lasting just two-plus innings.  Senior Shaleigh Jansen (Ottawa, Ill./Ottawa Township) pitched remarkably in relief for the Crusaders, going five innings and giving up just two hits and no walks while striking out five.  Amanda Ciran improved to 3-12 for Loyola (22-20, 13-7 Horizon) with a complete-game effort in the circle.

“Shaleigh came in and gave us a shot in the second game,” said Stevens.  “She came in down by four in the third inning and kept Loyola there.  That’s one of her jobs, to come in when we’re down and keep us in the game.  She did exactly that today.”

Valparaiso (31-16, 15-5 Horizon) looks to capture at least one game of the series as the three-game set against Loyola closes at the Valparaiso University Softball Field on Sunday at noon.  It will be Senior Day, as the Crusaders will hold a pre-game ceremony to recognize seven seniors in their final weeks as members of the Valpo softball team.  The game can be heard live on WVUR, 95.1 FM, Valparaiso and online at www.valpoathletics.com, which will also have a link for live stats.