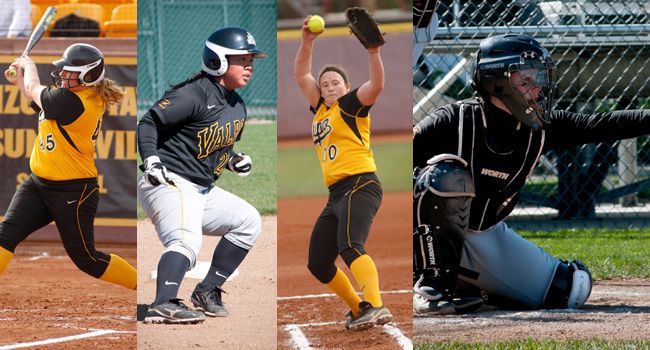 Valpo’s four First Team All-League honorees were the most by any league school since Loyola placed four on the First Team in 2007, the year before the Crusaders joined the Horizon League.  Duncan is the second Crusader to earn Newcomer of the Year accolades since Valpo joined the league in 2008, as senior Sara Strickland (Scottsdale, Ariz./Horizon) earned the honor in 2009.

Duncan received Newcomer of the Year accolades and also earned a spot on the First Team and the All-Newcomer Team after a remarkable rookie season.  The freshman designated player hit .399 in the regular season with 12 doubles and nine home runs while driving in 50 runs, which surpassed Valpo’s previous single-season record and now ranks second in a single year in Crusader history.  She also walked 25 times, giving her an on-base percentage of .492.  Duncan especially stood out within Horizon League play, leading all league players with a .471 batting average and 31 RBIs.

Ichiyama-Drewry earned her spot on the First Team after coming back from a redshirt season stronger than ever.  The senior third baseman hit .323 in the regular season with 42 RBIs, which is good for third in the league.  She picked up 23 extra-base hits on the year, including 13 doubles and seven home runs, giving her a slugging percentage of .572, which ranks fifth league-wide.  She also set a new school record and led the league in the field with 163 assists while manning the hot corner for the Crusaders.  Within Horizon League action, Ichiyama-Drewry led all league players with nine doubles and tallied 29 RBIs, good for second behind Duncan.  This marks Ichiyama-Drewry’s second league postseason honor, as she was a member of the league’s All-Newcomer Team in 2009.

Lagesse received First Team honors after a regular season in which she cemented herself as one of the league’s top pitchers.  The senior registered a league-best 18 victories with a 2.07 ERA, which ranked second, and 140 strikeouts, good for fifth league-wide.  Within Horizon League play, Lagesse picked up 10 of her victories, tying for league-high honors, and earned a 2.05 ERA with 69 strikeouts.  Opponents this season hit just .223 against the right-hander, an average she lowered to .205 in league-only action.  This is Lagesse’s second postseason honor from the Horizon League, as she was tabbed a Second Team All-League honoree last season.

Rutkowski repeats as a First Team All-League honoree after re-writing the Crusader record books this year.  The senior catcher broke Valpo’s single-season records for both home runs and RBIs just past the midway point of the 2012 campaign, and currently holds the season records in both with 13 home runs and 55 RBIs, the latter also a league-leading mark.  Rutkowski is hitting .411 on the season, good for second in the league and poised to become Valpo’s first .400 hitter since 1998.  She also ranks second in the league in slugging percentage (.775), runs scored (42), doubles (16) and total bases (117), as well as third in on-base percentage (.494) and hits (62).  For Rutkowski, it is her third career postseason Horizon League honor, as she was a Second Team selection in 2010 prior to her First Team nod last year.

Marinec earned a spot on the All-League Second Team after bouncing back from a medical redshirt season last year.  The sophomore second baseman hit .361 in the regular season with nine doubles and seven homers while scoring 42 runs, which ties for team-high honors and ranks second in the league.  Marinec also ranked among the league’s top-ten in batting average (7th), slugging percentage (.568, 6th) and hits (56, t-8th).  For Marinec, it is her second postseason honor from the league office, as she was an All-Newcomer Team honoree in 2010.