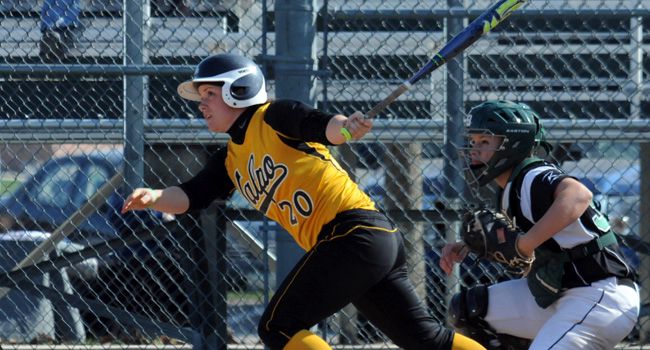 Jordan Rutkowski picked up a pair of hits against the Bulldogs. (Ray Acevedo)
Butler at Valparaiso | May 10, 2012
Related Links
Related Links

Top-seeded Valparaiso dropped its opening game at the 2012 Horizon League Softball Championship Thursday morning at the Valparaiso University Softball Field, falling to fifth-seeded Butler, 6-1.  With the loss, the Crusaders fall into the loser’s bracket and will play again Thursday evening at 6:30 p.m. against third-seeded UIC in an elimination game.

Valpo fell behind to the Bulldogs in the top of the second, as after cutting down the leadoff hitter attempting to stretch a double into a triple, Butler loaded the bases on a walk, a double and a hit batsman.  The Crusaders got the second out of the inning on a popped-up bunt, but Kayla Gray slapped a single through the left side of the infield to score Erin Falkenberry with the game’s first run.

The Crusaders answered immediately in their half of the second frame, however.  Senior Jordan Rutkowski (Alden, N.Y./Alden) led off the inning with a single through the left side and moved up to second two batters later on a groundout.  Freshman Lindsey Norway (Chicago, Ill./Chicago Christian) then hit a grounder which scooted under the third baseman’s glove and into left field, allowing Rutkowski to come all the way around to score the tying run.

Despite registering leadoff hits in five out of seven innings, the one run would be all Valpo pushed across the plate.  Meanwhile, the Bulldogs utilized four consecutive walks to score the go-ahead run in the fifth inning and then got a two-run single from Callie Dennison to push the lead to 4-1.  A Crusader throwing error and a sacrifice fly accounted for Butler’s final two runs in the sixth.

Senior Alex Lagesse (Beecher, Ill./Beecher) took the loss in the starting assignment for the Crusaders, falling to 18-9 after surrendering four runs in 4.2 innings of work.  Senior Shaleigh Jansen (Ottawa, Ill./Ottawa Township) pitched the final 2.1 innings for Valpo.  Breanna Fisher earned the complete-game win for Butler (25-30) to improve to 6-9 on the year.  Rutkowski and senior Sara Strickland (Scottsdale, Ariz./Horizon) each tallied two of Valpo’s five hits.

Valparaiso (37-17) will play its next game Thursday evening under the lights against UIC.  Live stats and live video can be found at www.valpoathletics.com.