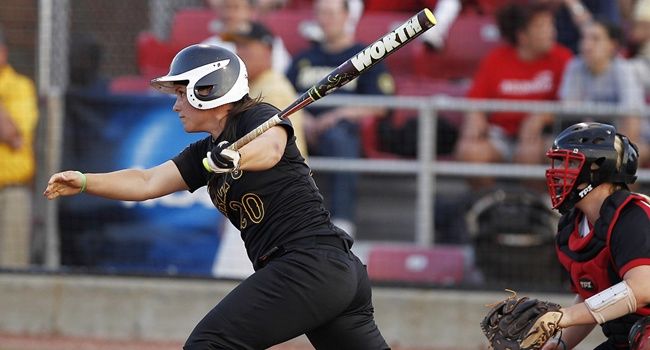 Jordan Rutkowski picked up hits in all three of her at-bats Friday. (Jeff Reinking)
Valparaiso at #7 Louisville | May 18, 2012
Related Links
Related Links

Valparaiso was within one out of springing a major upset on #9/7 Louisville to open its first-ever NCAA Tournament appearance, but a two-out, three-run home run in the bottom of the seventh by Alicja Wolny sent the Crusaders to a 6-4 loss on Friday evening at Ulmer Stadium in Louisville, Ky.  With the loss, Valpo will play an elimination game in the NCAA Tournament Saturday afternoon at 4:30 p.m. CDT against Kentucky, live on ESPN.

The Crusaders found themselves with the seventh-inning lead after pushing across three runs in the top of the fifth inning to claim the advantage.  Freshman Lindsey Norway (Chicago, Ill./Chicago Christian) led off the frame by watching four straight pitches go for balls to draw a leadoff walk.  Sophomore Amanda Wisniewski (Lake in the Hills, Ill./Huntley) followed with a chopper inside the third-base line that went for an infield single, putting two runners on with nobody out.

Senior Sara Strickland (Scottsdale, Ariz./Horizon) laid down a perfect sacrifice bunt to move both runners into scoring position with one away, nearly beating the throw to first along the way.  Two batters later, redshirt sophomore Jessie Marinec (Alsip, Ill./Marist) worked a full-count walk to load the bases.  Freshman Brittany Duncan (Fairborn, Ohio/Fairborn) then walked on five pitches to force in Norway to cut the Cardinals’ advantage to 3-2 and keep the bases loaded with two outs.

After a Louisville pitching change, senior Jordan Rutkowski (Alden, N.Y./Alden) stepped up with two hits already to her credit and delivered in the big spot, pushing a single back through the middle of the infield to plate both Wisniewski and Marinec to give the Crusaders a 4-3 lead.  Marinec would also pick up a two-out single in the seventh, but was stranded at first base.

With the one-run advantage, senior Alex Lagesse (Beecher, Ill./Beecher), who had been dealing well since surrendering three runs in the first inning, continued her strong performance in the circle.  Lagesse set down the Cardinals 1-2-3 in the fifth, all on groundouts, and pitched around a one-out single in the sixth, as pinch-runner Kirsten Straley was later cut down trying to steal.

But the Cardinals struck in the seventh for the game-winning runs.  Whitney Arion led off with a single through the right side and Jennifer Esteban followed with a perfectly-placed bunt that went for a single to put two runners on with nobody out.  Shortstop Angie Doerffler (Fort Wayne, Ind./Concordia Lutheran) gobbled up a grounder from Kristin Austin and forced the lead runner at third for the first out, and the Crusaders got the second out on a foul pop-out by Katie Keller.  But Wolny stepped in and drove the first pitch she saw to right field, clearing the tall fence for a walk-off three-run homer.

Valpo cracked the scoreboard first in its first-ever time at bat in the NCAA Tournament.  Doerffler lined the first pitch she saw into center field for a one-out single, and two batters later, Duncan lined a single of her own into center to move Doerffler to second.  An infield single by Rutkowski loaded the bases, still with just one away, and senior Joylyn Ichiyama-Drewry (Torrance, Calif./Redondo Union) drew a full-count walk to bring home Doerffler with the game’s first run.

Louisville struck back in its half of the first, however, scoring three runs to take a two-run lead.  Wolny doubled home the first Cardinal run of the game to tie the score, and Taner Fowler followed with a line-drive single into left field to score two runs, giving Louisville a 3-1 lead.

That would be all the offense Louisville would have until the seventh, though.  Lagesse registered 12 ground-ball outs over the next 14 outs she recorded and escaped the only real threat the Cardinals had to score, in the bottom of the third.  Back-to-back singles were followed by an error to load the bases with two away, but Lagesse induced a grounder by Maggie Ruckenbrod to Ichiyama-Drewry at third base, who just stepped on the bag for the inning-ending force.

Meanwhile, the Crusaders had a pair of chances to add to their single run on the scoreboard before the three-run fifth.  Marinec drew a one-out walk in the third, but was erased on a double play when Duncan’s hard liner was snagged just before it hit the dirt by the Louisville third baseman.  Then Rutkowski led off the fourth with a double, and after a pitching change, Ichiyama-Drewry singled back through the middle to put runners on the corners with nobody out.  After a flyout, on which Rutkowski had to hold at third base, the Crusaders attempted to score a run on the basepaths, but Ichiyama-Drewry was caught stealing and the Cardinals’ throw home just nipped Rutkowski sliding in for an inning-ending double play.

Rutkowski led the Valpo offense on Friday with three hits in as many at-bats, leading the Crusaders’ eight-hit attack.  Valpo was also able to draw five walks off the Cardinals’ pitching staff.  The third pitcher for Louisville (54-3), Chelsea Leonard, earned the win to improve to 11-1 on the year, surrendering two hits and striking out three in her 2.1 innings of work.  Lagesse took the loss for Valpo despite her strong effort in the circle, falling to 22-10.

Valparaiso (42-18) looks to stay alive on Saturday afternoon in an elimination game against Kentucky, which lost in walk-off fashion as well against Michigan earlier on Friday in the first game of the regional.  The Crusaders and Wildcats are scheduled for a 4:30 p.m. CDT first pitch, live on ESPN with Beth Mowins and Jessica Mendoza on the call.  A live audio broadcast will also be available through WVUR, 95.1 FM, Valparaiso, with links for the live ESPN and WVUR broadcasts, as well as live stats, available at www.valpoathletics.com.