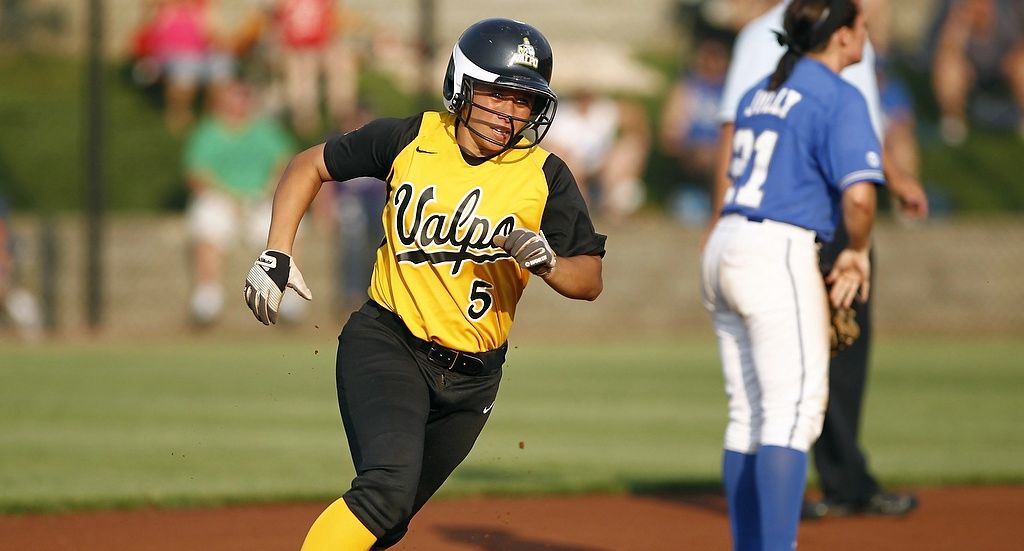 Even facing an early five-run deficit, the Valparaiso softball team refused to say die on Saturday afternoon, scoring four runs in the fifth inning to pull within one of Kentucky.  But in the end, the Crusaders couldn’t find the game-tying tally, as Valpo fell 5-4 to the Wildcats in the Louisville Regional of the 2012 NCAA Tournament, ending its historic season with a 42-19 record.

After both sides went down 1-2-3 in their respective halves of the first inning, Kentucky put five runs on the board in the top of the second inning.  A wild pitch scored Ginny Carroll before a two-out single by Emily Jolly plated Alice O’Brien to give the Wildcats a 2-0 advantage.  A Crusader throwing error kept the UK inning alive and brought two more runs across the plate, and an RBI single from Kara Dill capped the five-run frame for Kentucky, giving it an early 5-0 lead.

Senior Alex Lagesse (Beecher, Ill./Beecher), who had entered in relief after Dill’s RBI base knock in the second, pitched around a few hits to keep the Wildcats at five runs over the next few innings.  Kentucky opened the top of the third with back-to-back singles, but the senior got a pair of flyouts followed by a groundout to keep the Wildcats off the board.  Then, following a leadoff single in the fifth, Lagesse induced a 6-4-3 double play to erase the lead baserunner and continue to put up zeroes.

Meanwhile, the Valpo offense came alive after being retired in order in each of the first four innings by UK starter Rachel Riley.  Freshman Brittany Duncan (Fairborn, Ohio/Fairborn) led off the frame with a five-pitch walk, and pinch-runner Hayley Bridwell (Lemont, Ill./Lemont) moved up to second on a throwing error by the Wildcats.  With two on and none out, senior Joylyn Ichiyama-Drewry (Torrance, Calif./Redondo Union) lined a double down the left-field line for Valpo’s first hit, scoring Bridwell and moving senior Jordan Rutkowski (Alden, N.Y./Alden) to third, still with nobody out.

Senior Kelsey Phalen (Batavia, Ill./Batavia) stepped in and kept the train rolling, dropping a single into shallow center, just in front of the UK center fielder, to score Rutkowski and cut the lead to 5-2.  Freshman Lindsey Norway (Chicago, Ill./Chicago Christian) then hit a grounder to short, where the Wildcat shortstop tagged out Ichiyama-Drewry for the first out.

But her throw to first in an attempt for the double play was wild and sailed down the right-field line, allowing Phalen to come all the way around to score and Norway to advance to third.  Two batters later, senior Sara Strickland (Scottsdale, Ariz./Horizon) knocked a single back through the middle, cutting the deficit to one run as Norway crossed the plate with the fourth run of the inning.

Lagesse pitched out of a first-and-third, one-out jam in the top of the sixth and stranded a two-out walk in the seventh to keep Kentucky at five runs.  The Crusaders went down in order in their half of the sixth, but put the potential tying run on base in the seventh with two outs as Norway knocked a single into shallow right field.  A strikeout ended the game, however, sending Kentucky into a second elimination game later Saturday night and closing the Crusaders’ season.

Lagesse pitched 5.1 innings of scoreless softball in relief on Saturday, along the way breaking Andrea Zappia’s Crusader career strikeouts record in her final appearance.  Senior Sam McGee (Bloomington, Minn./Jefferson) fell to 15-6 in her starting assignment, although just two of the five runs she allowed were of the earned variety.  Riley picked up the win for Kentucky (30-29) to improve to 9-7, while Chanda Bell registered her fourth save.

Valparaiso (42-19) closed out a season which ranked as the best in program history.  The Crusaders’ 42 wins were a new program single-season record, while the team earned its first Horizon League regular season and tournament championships to advance to the NCAA Tournament for the first time in program history.  A full recap of Valpo’s 2012 campaign will be available at www.valpoathletics.com early next week.