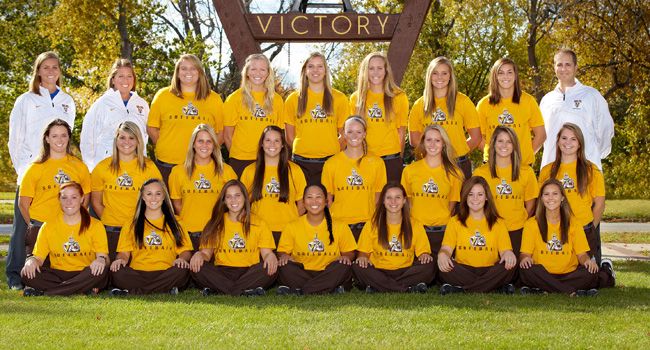 The Crusaders open the season this Saturday. (Aran Kessler)

Some of the names and faces have changed as the Valparaiso softball program enters the 2013 season, but the goal remains the same: defend the Horizon League regular season and tournament crowns the Crusaders claimed last season and return to the NCAA Tournament for the second consecutive year.

The Crusaders graduated a decorated class of six seniors from last year's championship squad, but return 12 letterwinners in their quest to repeat, including six starters. A talented group of nine newcomers joins the 12 returnees as well in 2013.

Head coach Jordan Stevens enters his third season at the helm of the Valparaiso University softball program in 2013 after leading the Crusaders to their most successful season in program history in 2012. Stevens guided the Crusaders to 42 victories in his second season in charge in 2012, surpassing by seven wins the program's previous single-season wins record.

The Crusaders finished 19-5 in Horizon League play, claiming the first league regular season championship in program history by 3.5 games. Stevens then led Valpo on its dramatic run through the Horizon League Championship, winning five straight elimination games, including the last three in walk-off fashion, to claim the tournament title as the Crusaders advanced to the NCAA Tournament for the first time in program history. Through his first two seasons at Valpo, Stevens owns a 76-40-1 (.654) record.

A quartet of players who started for the Crusaders a season ago highlight the group of seven infielders on the 2013 squad.

Fifth-year senior Joylyn Ichiyama made the decision to return for her final season of eligibility and start work towards her master's degree after earning her bachelor's degree last May, giving the Crusaders one of the league's best third basemen on both sides of the ball. Ichiyama was a First Team All-League performer, hitting .302 with 24 runs scored and 46 RBIs, the latter ranking third in the Horizon League and third-most in Crusader single-season history. Ichiyama, who was named the Defensive Player of the Horizon League Championship, also broke Valpo's single-season record and led the league with 188 assists from the hot corner.

The 2012 Horizon League Championship MVP, junior Angie Doerffler looks to start at shortstop for the third consecutive year. Doerffler, who hit .272 with 38 runs scored and 21 RBIs in 2012, came up with walk-off hits in both championship games of the tournament to give the Crusaders the title and send them to the NCAA Tournament. The junior's 38 runs scored last season were seventh-most in a single year all-time at Valpo, while she has also proven to be strong in the field, ranking third on Valpo's single-season chart with 150 assists last year.

Redshirt junior Jessie Marinec returned to action last season at second base and made an immediate impact, earning NFCA First Team All-Midwest Region honors, as well as being named to the All-League Second Team. Marinec hit .328 with 45 runs scored and 23 RBIs in 2012, tying for the league lead in runs with a mark that ranks second in a single season in Crusader history. She also tallied 59 hits as a sophomore, fifth-most on Valpo's single-season chart.

Sophomore Brittany Duncan will be in the mix for playing time at first base this season after serving as the regular starter at designated player in her rookie season. The 2012 Horizon League Newcomer of the Year, Duncan also earned First Team All-League and Second Team All-Region accolades after hitting .382 with 26 runs scored and 52 RBIs as a freshman. Duncan, who led the Horizon League in league-only play by hitting .471 with 31 RBIs, moved into Valpo's single-season top-five in eight different offensive categories in 2012. Also looking to earn playing time at first base, as well as serving as a backup at other infield positions, is senior Jennifer Hermanson, who saw action in 11 games last season for Valpo.

Two freshmen round out the Crusaders' group of seven infielders. Mackenzie Buchelt comes to Valpo from Lisle [Ill.] H.S., where she was an All-Area honoree in each of her final two seasons and earned All-Conference honors all four years. Kendra Marshall joins the Crusaders from Warsaw [Ind.] H.S., earning First Team All-State accolades as a senior and three times being named to the All-Conference team.

"Our most experience returns on the infield," said Stevens. "Joylyn coming back to play third was a big addition and will help bolster the infield alongside Angie and Jessie up the middle. Our best competition this spring has been at first, where Jen and Brittany have both shown fine defensive skills. To our added benefit we have three players who can all help our infield by being able to play multiple positions in Jen, Kendra and Amanda Wisniewski."

Valpo welcomes back five returnees to the outfield corps in 2013 while also welcoming a pair of newcomers vying for the three slots.

Junior Amanda Wisniewski returns after starting 57 games as a sophomore in left field. Wisniewski, who played second base as a freshman and provides the Crusaders infield depth as well, hit .258 with 29 runs scored and 25 RBIs in 2012, slugging at better than a .500 clip. Wisniewski tied for third in the Horizon League with nine home runs during her sophomore campaign, which is good for fourth on Valpo's single-season chart, and also drew 25 walks, fifth-most in the league.

Sophomore Lindsey Norway started 45 times in right field during her rookie season for the Crusaders. Norway finished the year with 21 runs scored, including five in the season's final six games, and also registered seven outfield assists. Senior Tori Brown started 21 games in the outfield in 2012 and enters her final year with 89 career starts. Brown tallied 11 runs scored and seven RBIs in 31 total appearances as a junior.

Senior Hayley Bridwell was mainly limited to pinch-running duty a season ago, finishing the season with 23 runs scored and seven stolen bases in 46 appearances. Junior Amanda Korb also served as a pinch-runner in 2012, making 18 appearances off the bench and scoring six runs.

Joining the Crusaders this season out of Lake Land [Ill.] C.C. is Kimberlin Wallace. Wallace helped the Lady Lakers to a pair of NJCAA regional titles in her two years at Lake Land, earning Defensive Player of the Tournament honors at the NJCAA national championship in 2011. She totaled 87 runs scored and 70 RBIs over her two seasons. Freshman Kaitlyn Ranieri comes to Valpo from Lake Central [Ind.] H.S., where she was a three-time All-Region and All-Conference honoree to close out her prep career.

"Our outfield group has a lot of potential," said Stevens. "We have five returners out there that have quality experience, but the difference will be whether they have improved from a year ago. We will need a couple of them to become impact players in the lineup. They do work at their skill a lot and I'm confident that somebody will show they are ready. In Kimberlin and Kaitlyn we have two very good defensive players who can run it down with the best of them and with Kaitlyn we add a left-handed stick to the lineup that will help balance the offense"

A pair of catchers are battling for the right to be on the receiving end of the Crusader pitching staff in 2013.

"Janelle and Tarah have had a good competition since the fall, and both are very capable of handling the duties of being behind the plate," said Stevens. "We won't go wrong with either bat in the lineup as they both can swing it very well. They will have a big say in the improvement of our pitching staff."

The biggest question mark entering the season for the Crusaders might be who will take the circle in 2013, as Valpo returns just 29 innings of Division I softball experience at pitcher. But Stevens will have plenty of arms to choose from, as four newcomers join the one returnee to form Valpo's pitching staff.

The lone returning pitcher for this year's Crusader squad is fifth-year senior Amanda Bolton. Bolton enters her final year after making just one appearance in the circle in 2012, a start against Pacific. All told, the senior has appeared in 17 games at pitcher over her three seasons, throwing 29 innings.

Valpo does welcome one other pitcher with collegiate experience, as Ashlyn Michalak joins the Crusaders after two seasons at Owens [Ohio] C.C. Michalak was conference Pitcher of the Year and a First Team All-Region honoree as a sophomore, as she went 17-4 with a 1.56 ERA and 202 strikeouts in 2012. As a freshman, Michalak tallied 77 strikeouts in just 59 innings and posted an 11-1 record.

Three other hurlers come to Valpo as freshmen for the 2013 campaign. Sydney Dow arrives at Valpo after spending her senior season at Okarche [Okla.] H.S., where she was an All-State honoree and helped her squad to the district title. Sierra Pico was a First Team All-State honoree out of Legacy [Nev.] H.S. as a senior and closed her prep career with 699 total strikeouts. Finally, Taylor Weissenhofer comes to Valpo from Lockport Township [Ill.] H.S., where she earned Second Team All-State accolades as a senior, setting a new school record for strikeouts in a single season (272).

"What we lack in innings experience, we will make up for in ability," said Stevens. "We have some very good young pitchers in Sierra and Taylor - combine that with a seasoned senior and transfer and we should just continue to get stronger in the circle as the year progresses."

The Crusaders' 2013 campaign starts this weekend in Nashville, Tenn. at the Belmont Spring Kickoff. Valpo will take on Jackson State, Central Arkansas and Western Illinois in Nashville, along with the host Bruins, on Feb. 9-10.

After a weekend off, Valpo continues its early-season slate at the Holiday Inn Hilltopper Classic Feb. 22-24, hosted by Western Kentucky in Bowling Green, Ky. Valpo will take on Western Michigan, Pitt, South Dakota State and Dayton in addition to WKU. The Crusaders then begin their spring break trek at Charleston, S.C. for the Buccaneer Invitational, hosted by Charleston Southern and also featuring UNC Wilmington and perennial top-10 squad Tennessee Mar. 1-3.

The spring break excursion then moves to the Sunshine State, as the Crusaders will play at three different sites within the state of Florida. The first stop is at the Stetson Classic in DeLand Mar. 8-10, featuring games against Stetson, Fairleigh Dickinson and Colgate. Valpo then plays a pair of games at Florida Gulf Coast on Mar. 13, taking on Maine in addition to FGCU. The trip concludes at the USF Spring Invitational in Clearwater Mar. 15-17, with contests versus Temple, Iowa State, Maryland and Cornell.

Upon returning home to Indiana, the Crusaders kick off the 2013 home slate almost immediately, hosting Western Illinois for a doubleheader on Wednesday, Mar. 20. The non-league schedule also includes a home twinbill against Bowling Green (Apr. 9) and road trips to IUPUI (Mar. 26) and Western Michigan (Apr. 30) for doubleheaders, as well as to Eastern Michigan (Apr. 3), Notre Dame (Apr. 18) and Purdue (Apr. 24) for single games.

The Horizon League schedule begins at home for Valpo Mar. 23-24, as the Crusaders welcome Wright State to the Valparaiso University Softball Field for a three-game set. Valpo will also play home series against Green Bay (Mar. 29-30), UIC (Apr. 13-14) and Youngstown State (May 4-5), while traveling to Loyola (Apr. 6-7), Detroit (Apr. 20-21) and Cleveland State (Apr. 27-28) within league play. The 2013 Horizon League Championship is set for May 8-11 and will be hosted by the regular season champion, with the tournament champion earning an automatic bid into the NCAA Tournament.