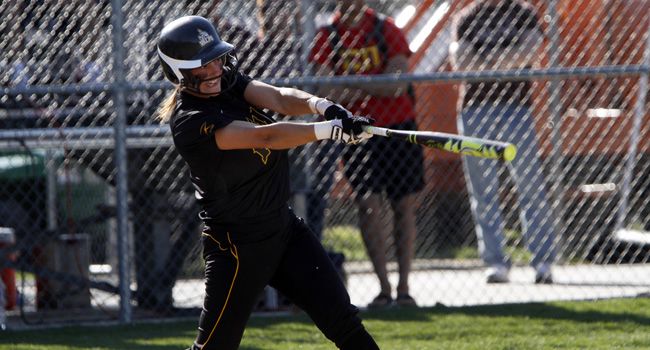 A six-run fifth inning pushed the Valparaiso softball team to victory on Sunday, as the Crusaders defeated Central Arkansas by a 7-3 final at the Belmont Spring Kickoff in Nashville, Tenn.  Valpo’s last scheduled game of the tournament, against Western Illinois, was rained out and will not be made up.

“We did a nice job of getting out of a lot of challenging situations today and were also able to capitalize offensively on what Central Arkansas gave us,” said Crusader head coach Jordan Stevens.

Playing as the visiting team for the first time in the tournament, the Crusaders struck immediately in the top of the first.  Freshman Kaitlyn Ranieri (Schererville, Ind./Lake Central), making her first career start, led off the game with a walk and moved up to second on a one-out single by fifth-year senior Joylyn Ichiyama (Torrance, Calif./Redondo Union).  Sophomore Brittany Duncan (Fairborn, Ohio/Fairborn) followed with a double to left-center, plating Ranieri and giving Valpo a quick 1-0 lead.  But UCA answered immediately in its half of the first, as Sam Forrest led off with a solo homer to tie the game at one.

Valpo boasted just one baserunner in the next three innings, a one-out single in the second by redshirt junior Jessie Marinec (Alsip, Ill./Marist), but could not advance her into scoring position.  Meanwhile, Central Arkansas got a one-out double from Melissa Bryant in the third and loaded the bases with two outs in the fourth, but both times, fifth-year senior Amanda Bolton (Scottsdale, Ariz./Horizon [Arizona]), making just her third career start, pitched out of danger to keep the game tied.

The Crusader offense then exploded in the fifth inning with the six-spot to put the game out of reach.  The frame started innocuously enough, as Marinec led off with a double, but was thrown out at home following a base knock by sophomore Lindsey Norway (Chicago, Ill./Chicago Christian).  With Norway on third and two outs, an error by the Bears kept the frame alive, allowing Norway to score and junior Angie Doerffler (Fort Wayne, Ind./Concordia Lutheran) to reach base as the Crusaders took a 2-1 lead.

Given extra life in the inning, Valpo took full advantage.  Ichiyama plated Doerffler with an RBI single, and Duncan followed by scoring Ichiyama with an RBI single of her own to push the lead to 4-1.  Sophomore Tarah McShane (Streamwood, Ill./St. Edward Central Catholic) then kept the inning alive with her first career base knock, setting up junior Amanda Wisniewski (Skokie, Ill./Huntley), who came through in a big way, launching a three-run homer to make it 7-1 Valpo.  Central Arkansas scored two runs with two outs in the bottom of the seventh, but Bolton induced a pop-up on the infield to close out the victory.

Bolton earned the complete-game win, scattering 11 hits and striking out four batters to earn the third victory of her career from the circle.  Kelsie Armstrong took the loss for Central Arkansas (1-1), surrendering nine hits and seven runs in her 4.2 innings of work.  Ichiyama went 3-for-4 to lead the Crusader offensive attack, while Duncan, Marinec and McShane all had multi-hit games as well.

Valparaiso (2-1) has next weekend off before returning to action at the Holiday Inn Hilltopper Classic in Bowling Green, Ky.  The Crusaders will play five games over three days at Western Kentucky.