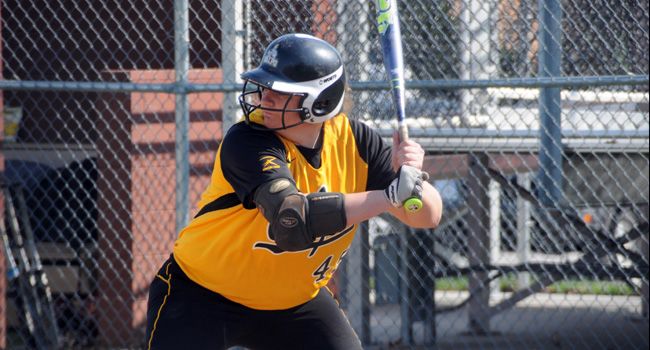 The Valparaiso softball team claimed a victory in extra innings at the Holiday Inn Hilltopper Classic on Saturday, downing Dayton 6-5 in eight innings of work. The Crusaders' second game of the day, against South Dakota State, also went to extra innings, but was suspended after Buchanon Park suffered the same fate as the Superdome during the Super Bowl, as a power outage struck in the eighth inning with the score 2-2. The game will be resumed at 9 a.m. Sunday morning prior to Valpo's scheduled pair of games.

“We did a good job of battling back in game one today, and I was pleased with that effort after a very lackluster start to the game,” said Crusader head coach Jordan Stevens. “We fought hard for that win. We need to stop giving away so many at-bats on offense and stop putting so many opposing hitters on base when they don't earn it. We're going to have to do this in order to have a good day tomorrow, with three games on the schedule.”

Dayton jumped out to a 4-0 lead in the day's opener, as the Flyers got two-run homers in the first inning from Tiffany Ricks and the third inning from Kasi Vazquez. The Crusaders chipped away at the lead, plating one in the fourth as freshman Janelle Bouchard (Kennebunk, Maine/Kennebunk) singled in junior Amanda Wisniewski (Skokie, Ill./Huntley), who had tripled with one out. Valpo then made it a two-run game in the sixth, as Bouchard singled, advanced to second on a wild pitch with two away and scored on an RBI single from sophomore Lindsey Norway (Chicago, Ill./Chicago Christian).

The Flyers got a one-out RBI single in the top of the seventh for an insurance run to push their lead to 5-2, but could not add to their advantage, as the Crusaders executed perfectly against a first-and-third double-steal attempt, cutting down the runner at the plate with two outs to keep the deficit at three runs. That play would prove key, as the Crusader offense came through in the clutch in the bottom of the seventh.

Playing under international tiebreak rules, each team had a runner placed on second with no outs in the eighth. Dayton sacrificed its runner to third on the first at-bat of extra innings, but junior Ashlyn Michalak (Holland, Ohio/Springfield [Owens C.C.]) induced a foul-out to keep the runner on third, and starting pitcher Taylor Weissenhofer (Homer Glen, Ill./Lockport Township) re-entered in the circle and struck out Kathleen Maloof looking to keep the Flyers off the scoreboard. Norway was placed on second in Valpo's half of the eighth, and after a four-pitch walk, the sophomore came all the way around to score the game-winning run on a throwing error by the Flyers' pitcher.

Valpo's 14-hit attack against Dayton was led by Duncan, who went 4-for-4 out of the cleanup spot in the order. Bouchard added three hits and a pair of RBIs, while Ichiyama also had a multi-hit game. Weissenhofer earned the win by recording the final out of the eighth, improving to 1-1, while Michalak and freshman Sierra Pico (North Las Vegas, Nev./Legacy) combined for 5.1 innings of one-run relief work. Sydney Cicchetti took the loss for Dayton (1-7), falling to 0-1 as she entered in the eighth and failed to record an out.

The Crusaders will have to wait for a final result in their matchup with South Dakota State until Sunday morning, as the game was suspended due to a power outage in the top of the eighth with the score tied at two. SDSU plated single runs in the second and fifth innings, while Valpo scored two in the fourth on an RBI single from Brown, scoring Duncan, and a wild pitch which brought home Ranieri. Fifth-year senior Amanda Bolton (Scottsdale, Ariz./Horizon [Arizona]) started and went 5.2 innings, while Pico was in the circle for the Crusaders when the game was halted.

Valparaiso (3-2) will resume its game against South Dakota State at 9 a.m. Sunday morning prior to its regularly scheduled pair of games. The Crusaders will face Pitt and Western Michigan following the completion of the suspended game. Live stats will be available through ValpoAthletics.com.