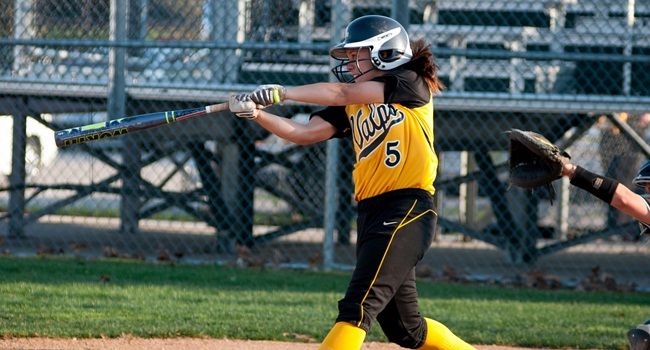 Freshman Taylor Weissenhofer (Homer Glen, Ill./Lockport Township) allowed just one hit and struck out 20 batters over eight innings of work Friday, earning a win and a save as the Valparaiso softball team defeated Fairleigh Dickinson, 1-0, and Colgate, 7-0, at the Hatter Classic in DeLand, Fla.

“Our pitching and defense were very good today and that gave us the chance to win, but our offense has got to improve and soon,” said Crusader head coach Jordan Stevens. “We have to swing the bats better than what we are doing, and we also have to be more aggressive at the plate.”

The Crusaders opened the tournament, hosted by Stetson, on Friday morning against Fairleigh Dickinson, and would score the only run they would need in the top of the first. Freshman Kaitlyn Ranieri (Schererville, Ind./Lake Central) led off the game with a double and advanced to third on a groundout. Two batters later, sophomore Brittany Duncan (Fairborn, Ohio/Fairborn) lined a first-pitch single into right-center field, scoring Ranieri with what would prove to be the decisive run.

Valpo starting pitcher Sierra Pico (North Las Vegas, Nev./Legacy) scattered five hits in her six innings of work, consistently pitching around trouble to keep the Knights off the scoreboard. Cindy Zamudio led off the FDU first with a double and attempted to score on a Crusader error, but was cut down at the plate as Valpo retained the lead. Pico then pitched out of a runner on second, one-out situation in both the second and third, and then escaped from a first-and-third, no-out jam in the fourth with a strikeout, followed by a double-play ball to keep the 1-0 lead.

The Crusaders' best chance at adding to its lead came in the third inning, when junior Angie Doerffler (Fort Wayne, Ind./Concordia Lutheran) led off the frame with a double and advanced to third on a one-out wild pitch before a pop-up and a shallow flyout ended the inning. Pico retired the final six hitters she faced in order before Weissenhofer entered in relief to start the seventh. The freshman earned her first collegiate save by striking out the side to preserve the one-run win for the Crusaders. Pico earned the win over FDU to improve to 2-4 on the season, while Megan Reiner took the complete-game loss for Fairleigh Dickinson (2-2) to fall to 1-1.

Valpo then scored in four of its six innings at the plate to earn the victory over Colgate. The Crusaders took the lead for good on a sacrifice fly from junior Amanda Wisniewski (Skokie, Ill./Huntley) which plated Duncan in the second inning, while fifth-year senior Joylyn Ichiyama (Torrance, Calif./Redondo Union) brought home sophomore Lindsey Norway (Chicago, Ill./Chicago Christian) with a two-out RBI single in the third.

Norway scored her second run of the game in the bottom of the fifth on an RBI bunt from Doerffler, and then produced a pair of runs at the plate in the sixth, as her bases-loaded single scored Wisniewski and redshirt junior Jessie Marinec (Alsip, Ill./Marist) to make it 5-0 Crusaders. Later in the frame, freshman Kendra Marshall (Leesburg, Ind./Warsaw) scampered home on a wild pitch for her first career run scored, and Ichiyama closed the scoring with her second RBI base knock of the game as Norway scored her third run of the contest.

Meanwhile, Weissenhofer was dominant in the circle for the Crusaders, striking out the side in four of her seven innings of work. The freshman struck out eight straight batters between the second and fourth innings en route to a 17-K performance, the most by any Crusader pitcher in at least 12 years. Weissenhofer improved to 4-2 with the win, while Courtney O'Connell took the loss for Colgate (0-1) in five-plus innings of work.

Valparaiso (8-6) continues play at the Hatter Classic with two more games on Saturday. The Crusaders will re-match against Colgate at 10 a.m. CT before facing host Stetson at 3 p.m. Live stats for both games will be available at ValpoAthletics.com.