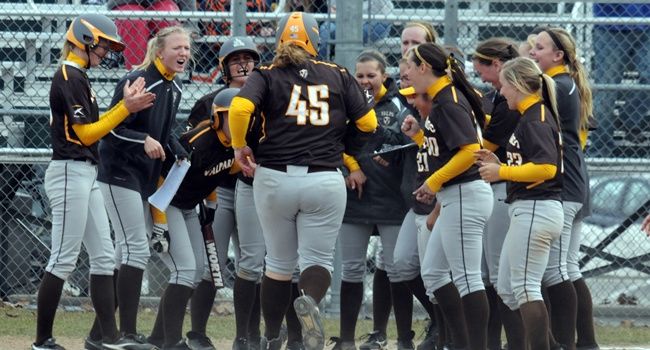 Sophomore Brittany Duncan (Fairborn, Ohio/Fairborn) launched a three-run homer with two outs in the bottom of the ninth inning in Saturday's nightcap at the Valparaiso University Softball Field, giving Valparaiso a 5-2 walk-off victory to complete the doubleheader sweep of Green Bay.  The Crusaders scored multiple runs in four of five innings in an 11-3 run-rule win in the day's opener.

“We played well today,” said Crusader head coach Jordan Stevens.  “Game one was fun to watch, and I think we came out with a great mindset.  Game two was a great game – well-played by both sides – and I was happy to see all facets of the game step up.  It was nice to see us rebound from yesterday's game.  We don't have much time though, as we need to be ready for another league series starting Monday.”

The nightcap saw both teams put a pair of runs on the board in the first three innings.  The Phoenix scored the first two, both courtesy of the long ball.  Miranda Spangberg connected on a two-out solo homer in the top of the second, and Miranda Reinke followed up the next inning by taking the first pitch of the top of the third over the left-center fence to give Green Bay a 2-0 lead.

The Crusaders responded with a pair of runs in their half of the third.  Not to be left out of the home run derby, junior Amanda Wisniewski (Skokie, Ill./Huntley) led off the bottom of the inning with a towering shot down the left-field line which stayed just fair, cutting the deficit in half with her third homer of the year.  Valpo then manufactured the tying run, as freshman Kaitlyn Ranieri (Schererville, Ind./Lake Central) singled and moved up to second on a sacrifice bunt before fifth-year senior Joylyn Ichiyama (Torrance, Calif./Redondo Union) brought her home with an RBI single, tying the game at 2-2.

While neither squad would score again in regulation, it wasn't for a lack of chances.  Green Bay came up with the first big opportunity in the top of the fifth.  After the Crusaders turned a double play around the horn following a leadoff walk, the Phoenix strung together a double, an infield single and a walk to load the bases with two away.  But freshman Taylor Weissenhofer (Homer Glen, Ill./Lockport Township) entered in relief and induced a ground-out on a full-count pitch to keep the game all tied up.

Valpo would be presented with a golden opportunity in the bottom of the sixth, as an error, a double and a fielder's choice loaded the bases with just one away, but the Phoenix would escape by inducing a pair of grounders.  A pair of walks and an error had the game-winning run just 60 feet away from home plate with two outs in the bottom of the seventh as well, but the result would be the same, as a ground-out left the bases loaded for the second straight inning and sent the game into extras.

The Phoenix had their next shot with the bags packed in the top of the eighth, picking up a one-out double and a walk to put two on before an infield single two batters later loaded the sacks with two out.  But Weissenhofer, who entered the week ranked among the nation's leaders in strikeouts per seven innings, reared back and tallied her third strikeout of the game to escape the jam.  Valpo would be unable to do anything with a two-out single in the bottom of the eighth, and Weissenhofer struck out two en route to retiring Green Bay in order in the ninth.

The Crusaders finally ended the extra-inning affair in the bottom of the ninth.  The frame started innocuously enough with two straight outs, but sophomore Tarah McShane (Streamwood, Ill./St. Edward Central Catholic) and redshirt junior Jessie Marinec (Alsip, Ill./Marist) drew back-to-back walks to keep the inning going.  Duncan stepped up, and after working the count to 3-1, launched the deciding home run just to the left of center field, completing the sweep of Saturday's twinbill.

Weissenhofer earned the win with 4.1 innings of shutout relief, surrendering just two hits while striking out and improving to 7-6 on the season.  Fifth-year senior Amanda Bolton (Scottsdale, Ariz./Horizon [Arizona]) started and threw the first 4.2 innings for the Crusaders.  Briana Cavin took the loss in relief for Green Bay, falling to 2-5 on the year.  Duncan went 3-for-4 with three RBIs in the win, finishing just a triple shy of the cycle, while Ranieri also tallied a two-hit game.

The opener on Saturday featured much less drama, as the Crusaders scored at least two runs in each of the final four innings.  The scoring started in the second inning with a two-out solo homer by sophomore Lindsey Norway (Chicago, Ill./Chicago Christian), her first of the season and second of her career.  The inning kept rolling on a walk by Wisniewski and a single from Ranieri, setting up a two-run single by junior Angie Doerffler (Fort Wayne, Ind./Concordia Lutheran) to make it 3-0 Valpo.

Duncan connected on her first home run of the day, a two-run shot, in the bottom of the third to push the lead to 5-0.  Later in the inning, freshman Janelle Bouchard (Kennebunk, Maine/Kennebunk) scored on an illegal pitch and Ichiyama registered a sacrifice fly to plate Norway as the Crusaders led 7-0 through three.

Freshman Sierra Pico (North Las Vegas, Nev./Legacy), who started in the circle in the opener, lost first her no-hitter and then her shutout in the top of the fourth, as a pair of singles and a walk set the stage for a bases-clearing triple which cut Valpo's lead to 7-3.  But the Crusaders responded with a two-out, two-run single from Wisniewski in their half of the fourth to make it a six-run game.  Valpo would then close the game in the bottom of the fifth, as a two-run base hit by Marinec pushed the advantage to eight runs at 11-3, ending the game via run rule.

Pico earned the victory in the day's first game, surrendering just the three hits and runs in the fourth inning in improving to 6-4.  Cavin started and took the loss for Green Bay (7-14, 1-2 Horizon), giving up five runs in two-plus innings of work.  Ichiyama and Marinec each had three-hit games as the Crusaders totaled 14 hits in the opener, while three different Valpo players scored two runs each and four drove in a pair of runs apiece.

Valparaiso (15-12, 2-1 Horizon) has a quick turnaround before its next league series, as the Crusaders welcome Wright State to campus on Monday and Tuesday – a makeup from the postponed series March 23/24.  The three-game set starts with a single game Monday afternoon at 3 p.m., with live stats available through ValpoAthletics.com.