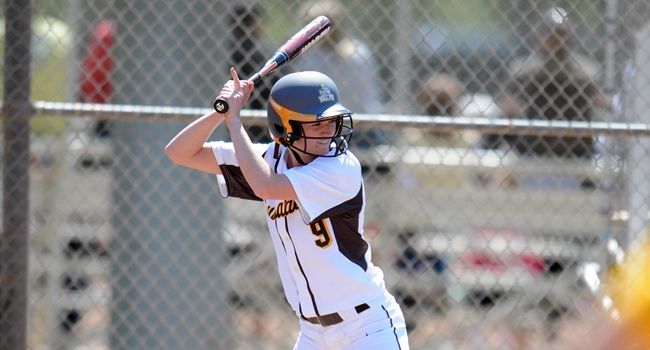 The Valparaiso softball team completed a series sweep of Wright State and remained atop the Horizon League standings on Tuesday, as led by a 6-for-7 effort at the plate by Jessie Marinec (Alsip, Ill./Marist), the Crusaders took two games from the Raiders at the Valparaiso University Softball Field by final scores of 8-5 and 6-2.

"I thought we played well today," said Crusader head coach Jordan Stevens.  "I thought we came out in the first game with a very good mindset, wanting to get on top early, which we did.  We were then able to get out of big situations with their threats - Sierra did a good job gutting out her game and Taylor did a good job in relief."

Wright State claimed the lead early in game one, as Katelyn Kite connected on a two-run homer in the top of the first.  But the Crusaders took the lead for good in the bottom of the second.  A walk and a pair of singles loaded the bases with nobody out, and a Raider error followed, allowing both Marinec and sophomore Brittany Duncan (Fairborn, Ohio/Fairborn) to score.  Junior Amanda Wisniewski (Skokie, Ill./Huntley) drove in sophomore Tarah McShane (Streamwood, Ill./St. Edward Central Catholic) later in the inning with a sacrifice fly, giving Valpo a 3-2 lead.

Valpo added a run on an RBI single from Marinec which scored fifth-year senior Joylyn Ichiyama (Torrance, Calif./Redondo Union) in the third, a run which the Raiders answered with an RBI double in their half of the fifth, cutting the Crusader lead to 4-3.  But the Crusaders gained breathing room with a three-run fifth inning.  With nobody out, McShane launched a fly ball over the right fielder's head all the way to the wall, plating both Marinec and pinch-runner Amanda Korb (Indianapolis, Ind./Lutheran) to make it 6-3 with the two-run triple.  Freshman Janelle Bouchard (Kennebunk, Maine/Kennebunk) followed by knocking a single through the right side to score McShane.

Wright State cut the lead to three runs with a two-out RBI single in the top of the sixth, but the Crusaders responded in kind, as Duncan scored on a grounder from Bouchard in the bottom half of the frame.  The Raiders would again move to within three runs in the seventh, bringing the potential tying run to the plate with one out.  Freshman Taylor Weissenhofer (Homer Glen, Ill./Lockport Township) entered in relief and shut down the Raiders, striking out the final two batters of the game to secure the victory.

Freshman Sierra Pico (North Las Vegas, Nev./Legacy) earned the win for the Crusaders, improving to 7-4 after throwing the first 6.1 innings.  Weissenhofer picked up her league-high fourth save of the year by recording the final two outs.  Montana Wear took the complete-game loss for Wright State, falling to 2-10.

Marinec led the 11-hit Crusader attack with her first career four-hit game in the opener, while McShane went 3-for-4 with two runs scored and two RBIs as well.  Bouchard drove in three runs and Duncan reached base all four times she came to the plate, including a trio of walks.

Wright State again would grab the lead for a short time in the nightcap, scoring a run on an RBI single in the top of the second.  Valpo pushed across a pair of tallies in the bottom half of the second on an RBI triple from Marinec and an RBI grounder by Bouchard, but the Raiders tied the game at 2-2 in the third with a run-scoring double.  The Raiders later loaded the bases with two outs in the third, but Weissenhofer made her second relief appearance of the day and induced a pop-out to keep the game all square.

Weissenhofer set the side down in order each of the next two innings, and the Crusaders would finally take control in the bottom of the fifth.  Freshman Kaitlyn Ranieri (Schererville, Ind./Lake Central) led off with a single, and junior Angie Doerffler (Fort Wayne, Ind./Concordia Lutheran) reached on a fielder's choice to put two on with nobody out.  Two batters later, Duncan walked to load the bases, and Marinec followed by knocking a single back through the middle to score Ranieri.  Later in the inning, Bouchard stepped up and delivered a two-run double to the gap, giving Valpo a 5-2 lead.

Wright State would put a runner in scoring position with two outs in each of the final two innings, but couldn't cut into the Crusader advantage.  Meanwhile, Valpo concluded the scoring in the bottom of the sixth, as sophomore Lindsey Norway (Chicago, Ill./Chicago Christian) led off the inning with a double and came home later in the frame on a two-bagger from Ichiyama.

Weissenhofer picked up the win in relief in the nightcap, improving to 9-6 thanks to scattering two hits and striking out seven in 4.1 innings of work.  Krystian DeWitt suffered the complete-game defeat for Wright State (5-22, 2-4 Horizon), falling to 3-10.  Marinec went 2-for-3 with two runs scored and two RBIs in the series finale, while Ichiyama and Bouchard also recorded multi-hit games as well, the latter driving in three runs in the process.

"In the second game, I thought we did a nice job of making some adjustments on DeWitt late in the game," said Stevens.  "She threw very well for four innings, and we were able to finally take some good swings on her the last couple innings.  The pitching and defense both again did a nice job and gave us a chance to win, and we were able to come up with some timely hits when we needed them."

Valparaiso (18-12, 5-1 Horizon) steps out of league play on Wednesday with a doubleheader at Eastern Michigan.  First pitch is slated for 1 p.m. CT, and live stats will be available through ValpoAthletics.com.