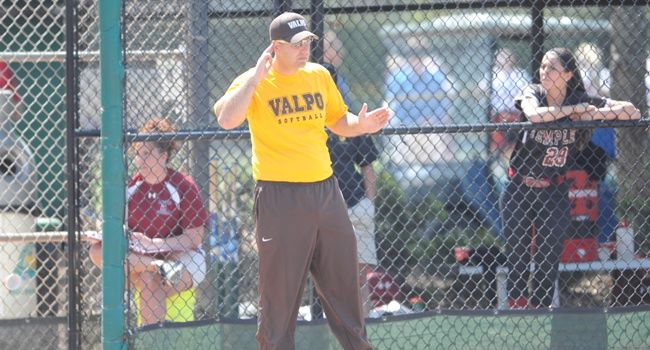 The long ball did in the Crusaders on Saturday in a Horizon League doubleheader at Loyola, as the Ramblers connected on eight home runs over the course of the two games as Valparaiso fell by final scores of 7-0 and 9-1.

Tarran Shaffer hit a two-run homer in the bottom of the second for the Ramblers in the opener, while Lauren Zaworski and Brie Pasquale hit back-to-back solo round-trippers in the fourth to make it 4-0.  Freshman Janelle Bouchard (Kennebunk, Maine/Kennebunk) broke up the no-hitter with a leadoff single in the fifth, but could not advance past first base.

The Ramblers added their final three runs in the bottom of the fifth, courtesy of a two-run homer by Brooke Andresen and an RBI double from Pasquale.  Valpo placed runners on first and second with nobody out in the sixth and first and second with one away in the seventh, but could not push across a run either time.

Freshman Taylor Weissenhofer (Homer Glen, Ill./Lockport Township) took the loss in the opener for the Crusaders, falling to 10-7 after giving up six runs in 4.1 innings of work.  Brittany Gardner improved to 7-5 with the complete-game two-hitter for Loyola.  Bouchard picked up both of Valpo’s hits, while junior Amanda Wisniewski (Skokie, Ill./Huntley) reached base twice on walks in the opener as well.

Loyola started off the scoring in the nightcap in its first turn at-bat, putting a four-run frame on the board thanks to a two-run homer by Lauren Moore and RBI base hits from Shaffer and Hannah Jenkins.  An RBI single from sophomore Lindsey Norway (Chicago, Ill./Chicago Christian) plated fellow sophomore Tarah McShane (Streamwood, Ill./St. Edward Central Catholic) to cut the deficit to 4-1 in the top of the fourth.

But the Rambers answered in their half of the fourth, as Andresen connected on a solo homer and Moore hit her second two-run homer of the game to push the advantage to 7-1.  Loyola closed out the run-rule win in the bottom of the fifth on a two-run homer by Andresen.

Freshman Sierra Pico (North Las Vegas, Nev./Legacy) fell to 7-5 after taking the loss in the second game, giving up four runs (two earned) in two-thirds of an inning of work, while junior Ashlyn Michalak (Holland, Ohio/Springfield [Owens C.C.]) threw the final 3.2 innings.  Amanda Ciran earned the complete-game win for Loyola (15-12, 3-2 Horizon) to improve to 3-1.  Redshirt junior Jessie Marinec (Alsip, Ill./Marist) reached base twice in the finale on a pair of walks.

Valparaiso (20-14, 5-3 Horizon) closes out the league series with a single game at Loyola on Sunday afternoon at noon.  Live stats will be available through ValpoAthletics.com.