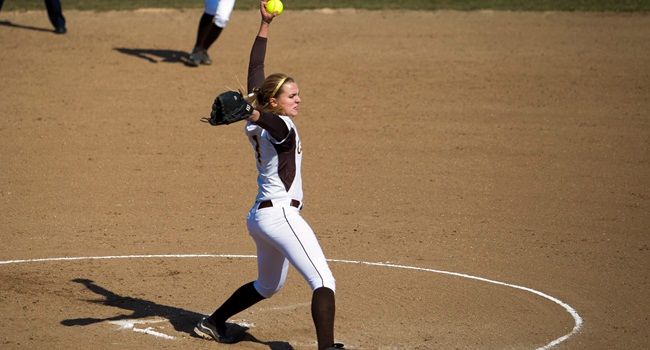 The Valparaiso softball team closed out a Horizon League series victory at Detroit in emphatic fashion on Sunday afternoon, scoring 12 runs in the first inning alone en route to a 17-0 win over the Titans.

Valpo’s 17 runs matched the third-most in a single game in program history and was just one run shy of the single-game record.  In addition, the Crusaders’ 12-run first inning ties the highest single-inning output known in program history.  Individually, freshman Kaitlyn Ranieri (Schererville, Ind./Central) set a team record for most walks drawn in a single game, earning four free passes in her five plate appearances while also getting hit by a pitch once.

While the Crusaders would jump out to a huge lead after just one turn at bat, the top of the first started innocuously enough.  Ranieri led off the game with a walk, and after advancing to second on a passed ball, moved over to third on an infield single by junior Kimberlin Wallace (Newton, Ill./Community [Lake Land C.C.]).  Fifth-year senior Joylyn Ichiyama (Torrance, Calif./Redondo Union) brought home the first run of the game with a sacrifice fly, plating Ranieri, but another flyout left just one runner on with two outs.

But Valpo exploded from there, scoring its final 11 runs of the inning before making another out.  Freshman Janelle Bouchard (Kennebunk, Maine/Kennebunk) started the run with a two-run homer to left field, followed by a double to the wall in center from senior Tori Brown (Harrison, Ohio/Harrison).  Junior Amanda Korb (Indianapolis, Ind./Lutheran) continued the roll with a triple down the right-field line which scored Brown to make it 4-0, and after a walk by junior Angie Doerffler (Fort Wayne, Ind./Concordia Lutheran), junior Amanda Wisniewski (Skokie, Ill./Huntley) brought both runners home with a double to right-center field, pushing the lead to 6-0.

The train kept rolling, as Ranieri drew her second walk of the inning and Wallace tallied her second infield single of the frame to load the bases.  Ichiyama dropped a single into left-center to score two more runs to make it 8-0, and Marinec then reached on an error, again loading the bases.  Bouchard capped the inning with another piece in her torrid weekend at the plate, launching a no-doubt grand slam deep down the left-field line to finish off the 12-run frame.  For Bouchard, it was her second home run of the inning and her fourth round-tripper overall on the weekend, including her second grand slam.

From there, the result was academic.  The Crusaders would add a pair of runs in the third on an error and a wild pitch, scored one in the fourth on a Titan error and finished out the scoring in the fifth with two more runs, both of which came home on Detroit errors.

Valpo finished the afternoon with just nine hits in the run-rule shortened victory, but also drew seven walks, including the aforementioned four from Ranieri, and were hit by four pitches.  The Crusaders also were able to take advantage of eight Titan miscues in the field.  Bouchard went 3-for-4, driving in six runs with her pair of home runs, while Wallace also picked up a pair of hits.  All nine Valpo starters crossed the plate, eight of them scoring exactly two runs.

Staked to a 12-run lead before even taking the circle, freshman Taylor Weissenhofer (Homer Glen, Ill./Lockport Township) cruised to the win to improve to 12-9.  Weissenhofer gave up just two hits and one walk, striking out eight in the complete-game shutout.  Julia Maksym fell to 1-14 on the year for Detroit (5-37, 2-13 Horizon), starting and giving up seven runs in two-thirds of an inning of work.

Valparaiso (23-20, 8-7 Horizon) steps out of league play on Wednesday for a single game at Purdue at 3 p.m. CT.  Live stats will be available through ValpoAthletics.com.