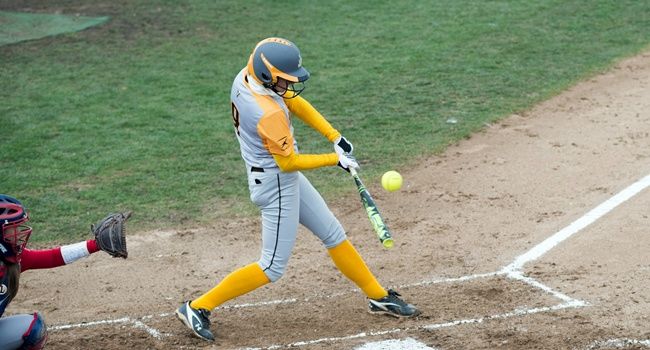 The Valparaiso softball team scored a pair of runs in the top of the sixth inning to take the lead at Purdue Wednesday afternoon, but the Boilermakers scored three in the bottom half of the frame and the Crusaders left the bases loaded in the seventh as they fell by a final score of 4-2.

“I thought we played a solid game today,” said Crusader head coach Jordan Stevens.  “Taylor did a nice job scattering some hits around and got out of trouble when she needed to.  I thought we swung the bat really well as well.  We had really good efforts offensively and in the circle, but it just didn’t end up in a result of a win for us today.”

Neither team could crack the scoreboard through the first four-plus innings, as Crusader starter Taylor Weissenhofer (Homer Glen, Ill./Lockport Township) and Purdue starter Lexy Moore put up matching zeroes.  Valpo had three opportunities to score in the first five innings, putting a runner in scoring position with less than two outs in the second, third and fifth innings, but could not advance the runner beyond second base in any instance.

Meanwhile, the Boilermakers got their leadoff batter on via a bunt single in the bottom of the first, but she was promptly erased attempting to steal second on a nice throw from catcher Janelle Bouchard (Kennebunk, Maine/Kennebunk).  Weissenhofer set down the next eight batters she faced in order before Purdue threatened with back-to-back singles to start off the fourth.  A groundout moved both runners into scoring position with one away, but Weissenhofer tallied a big strikeout and then induced a flyout to keep the game scoreless.

Purdue would break the scoreless tie in the bottom of the fifth inning.  Maia Monchek singled with one out, and following a sacrifice bunt, Ashley Courtney brought home pinch-runner Gabrielle Brown with a single into shallow right-center field.  A double continued the Boilermaker threat, but a flyout ended the inning with the Crusaders trailing by just one run.

Valpo would then take the lead in the top of the sixth, pushing two runs across the plate without a ball leaving the infield.  Junior Kimberlin Wallace (Newton, Ill./Community [Lake Land C.C]) led off the inning by dropping down a perfect bunt single in front of the plate, and fifth-year senior Joylyn Ichiyama (Torrance, Calif./Redondo Union) followed with a grounder deep into the five-six hole for an infield single.  Redshirt junior Jessie Marinec (Alsip, Ill./Marist) then stepped up and hit a ball into nearly the same spot, with the Purdue shortstop only able to knock it down on the backhand to keep it on the infield as the bases were loaded with none out.

Bouchard stepped up with the bases full and delivered an RBI in an unconventional fashion following her four-home run weekend, connecting on a swinging bunt that went about 20 feet down the third-base line.  With no chance at throwing out Bouchard at first, the Boilermaker third baseman attempted to flip the ball using her glove in an attempt at forcing out Wallace, but the junior beat the flip for the Crusaders’ first run.  Two batters later, junior Amanda Korb (Indianapolis, Ind./Lutheran) grounded out to plate Ichiyama and give Valpo the 2-1 lead.

The lead would prove short-lived, however, as Andie Varsho led off the bottom of the sixth with a solo home run to tie the game.  Later in the inning, an error would prove costly, as with two outs, the Boilermakers connected on back-to-back run-scoring doubles for the final score.  The Crusaders loaded the bases in the top of the seventh on a double from junior Amanda Wisniewski (Skokie, Ill./Huntley), a single by Ichiyama and a hit-by-pitch to Marinec, but a groundout ended the game.

Weissenhofer went the distance for the Crusaders in the circle, falling to 12-10 despite giving up just two earned runs and striking out seven while walking none.  Moore improved to 10-10 with the complete-game win for Purdue (22-25).  Bouchard, Marinec and Ichiyama each had two hits to pace Valpo’s 11-hit attack.

Valparaiso (23-21) returns to league play this weekend with a three-game series at Cleveland State.  The series begins with a doubleheader Saturday starting at noon CT, with live stats and video available through ValpoAthletics.com.