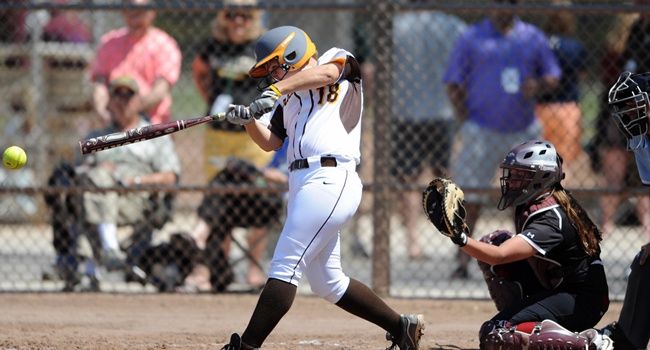 Stepping out of Horizon League play for the final time in the 2013 campaign, the Valparaiso softball team split a pair of games Wednesday evening at IUPUI, rallying for a 5-4 victory in eight innings in the opener before a seventh-inning rally came up short in a 3-1 loss in the nightcap.

The Jaguars claimed a 4-0 lead through three innings of the day’s first game on the strength of two-run homers from Jessica Lam and Ali Mosier in the second and third innings, respectively.  Valpo put one runner on base in each of the first four frames, but only once was able to advance into scoring position.  Junior Kimberlin Wallace (Newton, Ill./Community [Lake Land C.C.]) stole second with two outs in the first before a fly out ended the scoring opportunity.

The Crusaders took advantage of a miscue by the Jaguars to tie the game at four-all in the top of the fifth.  Sophomore Tarah McShane (Streamwood, Ill./St. Edward Central Catholic) led off the frame with a double to the fence in left, and junior Angie Doerffler (Fort Wayne, Ind./Concordia Lutheran) made it two runners on base as she drew a walk.

Three batters later, with two outs, Wallace chopped a ball right in front of the plate, but the throw from the IUPUI catcher to first base was well high, allowing McShane to score and Doerffler to advance to third.  Fifth-year senior Joylyn Ichiyama (Torrance, Calif./Redondo Union) made the Jaguars pay right away, drilling the first pitch she saw for a no-doubt homer over the left-field fence to tie the game at 4-4.

Valpo threatened again in the sixth, as Doerffler doubled with two outs and junior Amanda Wisniewski (Skokie, Ill./Huntley) drew a walk behind her, but a pop-out ended that chance.  IUPUI put runners on first and second with one out in the sixth before freshman Taylor Weissenhofer (Homer Glen, Ill./Lockport Township) entered in relief and recorded back-to-back strikeouts.  The rookie then pitched around a leadoff single in the seventh to send the game into extra innings.

The first two Crusaders went down in order on strikes in the top of the eighth, but McShane came up with the big blow, taking a 1-2 pitch over the wall in left-center field to give Valpo the 5-4 lead.  Weissenhofer and the Crusader defense set IUPUI down in order in the bottom half of the inning to secure the win.

Weissenhofer improved to 15-10 with the win, giving up just one hit and one walk in her 2.2 innings of relief.  Freshman Sierra Pico (North Las Vegas, Nev./Legacy) started and tossed the first 5.1 innings, surrendering just three hits.  Jocelyn Oppenhuis took the loss in relief for IUPUI, falling to 4-11 after pitching the last three innings.  McShane went 2-for-4 with two runs scored, while Doerffler and Wisniewski each reached base twice as well.

The Crusaders were unable to crack the scoreboard in the first six innings of the nightcap, with their best chance coming in the top of the second as freshman Janelle Bouchard (Kennebunk, Maine/Kennebunk) and senior Tori Brown (Harrison, Ohio/Harrison) led off the frame with back-to-back base hits.  After a sacrifice, both runners were in scoring position with one away, but a strikeout and a ground out kept Valpo off the board.  Meanwhile, the Jaguars took a 3-0 lead in the fourth thanks to a two-run single from Aundria Basquez and a run-scoring double by Mosier.

Valpo went down fighting, putting the potential tying run in scoring position in the top of the seventh.  With one out, Doerffler and Wisniewski dropped back-to-back singles into shallow right-center field, and two batters later, freshman Kaitlyn Ranieri (Schererville, Ind./Lake Central) knocked a base hit through the right side of the infield to load the bases.

Pinch-hitter Lindsey Norway (Chicago, Ill./Chicago Christian) stepped up and knocked in a run the hard way, getting hit by a pitch to force home pinch-runner Hayley Bridwell (Lemont, Ill./Lemont) and leave the bases loaded with two outs, but a pop out closed out the game in the Jaguars’ favor.

Fifth-year senior Amanda Bolton (Scottsdale, Ariz./Horizon [Arizona]) fell to 3-3, taking the loss after throwing the first three-plus innings and giving up a pair of runs.  Junior Ashlyn Michalak (Holland, Ohio/Springfield [Owens C.C.]) pitched the final three innings in relief.  Nicole Natter improved to 2-3 for IUPUI (18-28), throwing the first 6.2 innings, and Cassie Vodde earned the one-out save for her first of the season.  Brown paced the Crusaders’ seven-hit attack with a pair of base knocks.

Valparaiso (27-23) closes out the regular season at home this coming weekend against Youngstown State in a key Horizon League series.  The three-game slate starts off with a doubleheader at 1 p.m., with live audio and stats available through ValpoAthletics.com.