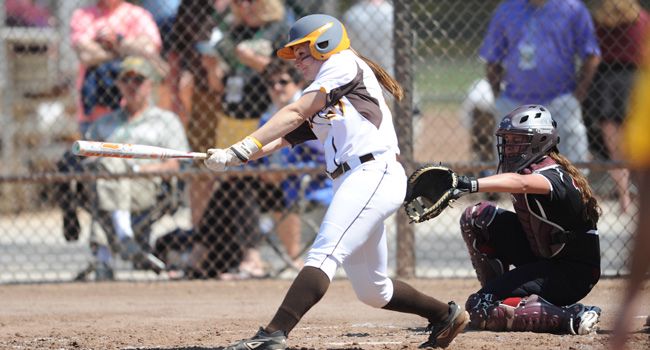 The Valparaiso softball team continued its run at the 2013 Horizon League Softball Championship in Chicago, Ill. on Friday with a pair of wins, advancing to Championship Saturday after defeating Cleveland State, 4-3 (8 innings), and Wright State, 10-2.  The Crusaders will face Youngstown State on Saturday, needing a pair of victories to claim the tournament crown for a second straight year.

The day opened with the third-seeded Crusaders facing a matchup against fourth-seeded Cleveland State on a cool, windy afternoon at UIC.  Neither team could get much going offensively in the early going, as Valpo starter Taylor Weissenhofer (Homer Glen, Ill./Lockport Township) set down nine batters in a row after a leadoff walk in the first.  Meanwhile, the Crusaders got a runner in scoring position with two outs in the first and one in scoring position with one out in the third, but could not bring home the opening run either time.

The Vikings would crack the scoreboard first in the top of the fourth.  Horizon League Player of the Year Dara Toman led off the inning with a fly ball to right field that the wind carried all the way to the wall for a triple, and Newcomer of the Year Erica McNew followed with a single back through the middle to score Toman and make it 1-0.

The duo teamed up for the Vikings’ next run as well, as Toman led off the top of the sixth with a wind-aided double, one which blew from left into left-center field, and scored on a liner into center by McNew.  Pinch-runner Darien Ward would score two batters later on an RBI double from Caila Ferro, chasing Weissenhofer from the circle.  Reliever Sierra Pico (North Las Vegas, Nev./Legacy) limited the damage, entering and retiring both batters she faced to keep it at a three-run deficit.

Down to their final six outs, the Crusaders tied the game in the sixth with a three-spot of their own.  Junior Kimberlin Wallace (Newton, Ill./Community [Lake Land C.C.]) led off with a line-drive single into center, her second hit of the ballgame, and two batters later, a grounder from Jessie Marinec (Alsip, Ill./Marist) scooted through the legs of CSU’s second baseman and into the outfield to put two on with one out.

Freshman Janelle Bouchard (Kennebunk, Maine/Kennebunk), who entered the tournament as the league’s RBI leader, stepped up and delivered, lining a hard-hit single into right, enough to score Wallace.  The Vikings’ right fielder misplayed the ball on one hop as well as it rolled all the way to the wall, allowing Marinec to come around with the Crusaders’ second run and moving Bouchard all the way to third.  Sophomore Tarah McShane (Streamwood, Ill./St. Edward Central Catholic) followed with an RBI groundout, plating Bouchard with the tying run.

The Vikings threatened in the seventh, but Pico was able to pitch out of trouble, as after the bases were loaded on walks, the freshman induced a grounder for the force at second to keep the game tied at three.  A leadoff single by Angie Doerffler (Fort Wayne, Ind./Concordia Lutheran) went for naught in the bottom of the seventh as the game went into extra innings.

Pico enjoyed a 1-2-3 top of the eighth inning in the circle, giving Valpo another chance for the walk-off win, and this time the Crusaders delivered.  Fifth-year senior Joylyn Ichiyama (Torrance, Calif./Redondo Union) watched four pitches go by, taking a four-pitch walk to lead off the inning, and Marinec executed a perfect sacrifice bunt, moving Ichiyama to second with one away.  Bouchard came up with the big blow, knocking a single back through the middle, more than enough to allow Ichiyama to score standing up with the game-winning run and keeping the Crusaders’ title hopes alive.

Pico earned the win in relief, tossing 2.2 innings of hitless relief while striking out four.  Susan Knight took the complete-game loss for Cleveland State (22-27) to close the season at 16-11.  Wallace and Bouchard both had multi-hit games in the opener.

Valpo’s opponent in the day’s final game wasn’t determined until later in the afternoon, as Youngstown State’s 1-0 win over Wright State meant that the Crusaders would face WSU for the right to advance to Championship Saturday.  The Crusaders had the early opportunities against the Raiders, putting two on with two away in the first and loading the bases in the second, but couldn’t push a run across either time.  Meanwhile, Pico earned the start in the circle against WSU and was strong early, allowing just two runners to reach through the first three innings.

The Crusaders would claim the lead for good with a four-run bottom of the third.  Ichiyama reached on a dropped pop-up on the infield, and Marinec then reached on her sacrifice attempt when the throw to first base was muffed.  With two on and none out, head coach Jordan Stevens elected to allow Bouchard to swing away, and the decision paid off as the freshman lined a double down the left-field line, bringing Ichiyama in with the game’s first run.

Two batters later, sophomore Lindsey Norway (Chicago, Ill./Chicago Christian) worked a full count before lining a single back up the middle, scoring both Bouchard and Marinec.  Freshman Kaitlyn Ranieri (Schererville, Ind./Lake Central) added an RBI single to plate Norway later in the inning to make it 4-0 Valpo.  The Crusaders added a pair of runs to their score in the fourth, as Doerffler lined a 0-2 pitch down the right-field line which scored McShane and Marinec.

Wright State got RBIs from Angie Clark and Hanna Floyd in the top of the fifth, cutting the Crusader lead to 6-2, but Valpo would close out the run-rule victory with a four-spot in its half of the fifth.  Ranieri reached on a leadoff error, Ichiyama doubled off the top of the left-field wall and Marinec advanced to first on a fielder’s choice to load the bases with one out.  After a pop out, McShane stepped to the plate and drove a pitch deep to right-center into the wind and over the wall for her first career grand slam to end the game.

The Crusader offense enjoyed its best game of the tournament in the win over the Raiders, picking up 11 hits, with Doerffler leading the way by going 3-for-3.  McShane tallied a pair of hits and also walked once as well.  Marinec scored a team-best three runs in the run-rule win.  Pico earned her second win of the day, carrying a no-hitter into the fifth and giving up just two runs while striking out six WSU batters to improve to 11-9 on the year.  Krystian DeWitt suffered the loss for Wright State (19-37), finishing the year 14-15 after surrendering four runs in 2.2 innings of work in the start.

Valparaiso (32-25) looks to complete its second run to the league title out of the loser’s bracket of the tournament in as many seasons on Saturday, as the Crusaders will take on Youngstown State.  Valpo will have to win two games to claim the crown, while one win by the Penguins will give them the title.  Links for live coverage of Saturday’s action will be available at ValpoAthletics.com.