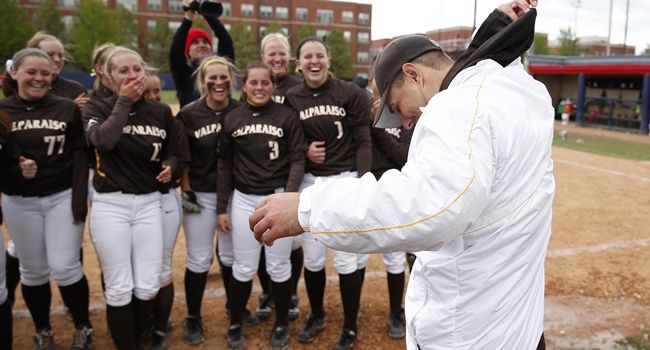 Next Up in Crusader Softball: For the second straight season, the Valparaiso softball team is going to the NCAA Tournament. The Crusaders are heading to Ann Arbor, Mich. this weekend for the Ann Arbor Regional of the 2013 NCAA Tournament, starting tournament play against host #7/8 Michigan Friday evening. #18/22 California and Central Michigan are the other two teams in the regional. Every game of the regional will be broadcast live online at ESPN3.com.

Previously: For the second straight year, Valparaiso dropped its first game at the Horizon League Championship before rallying to win five games in a row to capture the league crown. The Crusaders lost their opener to Youngstown State before winning elimination games against UIC, Cleveland State and Wright State to reach Championship Saturday. Valpo then defeated YSU twice (2-1, 11-9) to repeat as league champions.

Following the Crusaders: Every one of the Crusaders’ games from the Ann Arbor Regional will be broadcast live online on ESPN3.com, with Sam Gore and former Northwestern standout Garland Cooper on the call. Live stats will also be running for all of the Crusaders’ tournament games, with the possibility of live radio as well on WVUR (95.1 FM, Valparaiso). Links for all of the live coverage will be available at ValpoAthletics.com.

Head Coach Jordan Stevens: Jordan Stevens is in his third season at the helm of the Valparaiso University softball program in 2013, having won 110 games as the Crusader head coach. Stevens guided the Crusaders to 42 victories in his second season in charge in 2012, surpassing by seven wins the program's previous single-season wins record. Along the way, Valpo claimed the Horizon League regular season and tournament championships, advancing to the NCAA Tournament for the first time in program history.

Series Notes: Michigan - The Crusaders are 0-3 all-time against the Wolverines, losing a doubleheader in Ann Arbor in 2004 (10-0, 7-0) before fighting the fifth-ranked team in the nation down to the wire on Mar. 1, 2011, falling 2-1 on an unearned run in the bottom of the seventh. Valpo was in the same regional as the Wolverines last season, but the two teams did not meet.
Central Michigan - The Crusaders and Chippewas have played just one doubleheader in program history, with the teams splitting the twinbill (4-3 CMU; 8-6 Valpo) in Mt. Pleasant on Mar. 26, 2008.
California - First meeting

Experience Returns in the Lineup: While Valpo graduated a decorated class of six seniors following the 2012 season, the Crusaders welcomed back 12 letterwinners in 2013, including six regular starters from last season’s batting order.

What Needed Replaced: The Crusaders had a lot of production to replace with the loss of the 2012 graduates. This year’s squad returned just 1.2 innings pitched from last season, with the three graduated pitchers combining for 126 wins and 912 strikeouts in their time at Valpo. Meanwhile, the three position players who closed out their careers in 2012 combined for 625 hits, 405 runs scored and 370 RBIs over their four-year careers.

Second NCAA Appearance: This marks the Crusaders’ second consecutive trip to the NCAA Tournament. 2012 was the first time in Valpo softball history that the program advanced to the NCAA Tournament, and the team acquitted itself well despite going 0-2. The Crusaders were within one out of an upset of a top-ten Louisville team before a three-run walk-off homer gave the Cardinals a 6-4 win, and then Valpo had the potential tying run on base in the seventh inning in a 5-4 loss to Kentucky.

A Drama-Filled Tournament: It was like deja vu for the Crusaders in this year’s Horizon League Tournament, as for the second straight year, Valpo lost its first tournament game before reeling off five victories in a row in potential elimination games to claim the tournament championship. This year, four of Valpo’s five elimination game wins came by two runs or less, including a walk-off win in extra innings over Cleveland State, and wins by one run and two runs on Championship Saturday.

Tournament Tidbits: Over the last two seasons, Valpo has eliminated eight of the other ten squads competing in the Horizon League Championship. Of Valpo’s ten tournament victories, seven of them have come by two runs or less, including five by one run and four in walk-off fashion, including three in extra innings. The Crusaders’ runs the last two years have made them just the second and third teams in Horizon League victory to win the league tournament after losing their first game, joining Detroit in 1987 (first year of HL play).

Bouchard Named Tournament MVP: For her first go-round in the Horizon League Championship, Valpo freshman catcher Janelle Bouchard sure looked like a veteran at the plate. The native of Kennebunk, Maine was named Tournament MVP, as well as Batter of the Tournament, after going 9-for-17 (.529) at the plate with four runs scored, four doubles, one triple, one home run and 10 RBIs (matching the league tournament record) over Valpo’s six games. Bouchard came up with a number of key hits, starting with a two-run triple to give Valpo the lead for good in its win over regular-season champion UIC. She also recorded the walk-off single in the bottom of the eighth in the win over Cleveland State, and closed the tournament with a 5-RBI performance in the winner-take-all game against Youngstown State.

More Tournament Awards: Bouchard was one of four Crusaders to earn All-Tournament Team accolades following Valpo’s title win. Freshman Taylor Weissenhofer earned Pitcher of the Championship accolades as she picked up three of Valpo’s five victories in the circle, including a four-hit performance in Saturday’s opener to help send Valpo to the winner-take-all game. Junior Angie Doerffler repeated as an All-Tournament Team honoree after hitting .444 (8-for-18) over the six tournament games, while fifth-year senior Joylyn Ichiyama set a new tournament record with nine runs scored and went 6-for-17 (.353) at the plate, including two doubles and two home runs.

Versus the Tournament Field: Valpo has played just a pair of games against the 64 teams in this year’s NCAA Tournament field. The Crusaders lost at Western Kentucky, 3-0, on Feb. 22 and fell 5-0 at Tennessee on Mar. 2. Valpo was also scheduled to play at Notre Dame, but that contest was rained out.

35 Wins Within Sight: Entering the NCAA Tournament, the Crusaders sit just one win shy of the 35-win mark for the season, a mark which has become a new benchmark for the program. Prior to the 2008 season, Valpo had never won more than 27 games in a single season, but over the past six years, the Crusaders have won at least 30 games five times, including in each of head coach Jordan Stevens’ first three years at the helm, and at least 35 games twice. In fact, over the last four years, the Crusaders have not won less than 34 games, as their year’s senior class is the winningest in program history (145 wins).

Record-Setting Seasons: A pair of Crusaders enter the NCAA Tournament having already set new program single-season records this season. Junior Amanda Wisniewski has zoomed past the previous Valpo record for walks in a single year, drawing 35 bases on balls this season. Freshman Taylor Weissenhofer has demolished the Crusaders’ previous mark for strikeouts by a pitcher in a single season as well and enters the NCAA Tournament with 220 strikeouts. Meanwhile, fifth-year senior Joylyn Ichiyama is tied for Valpo’s career record in assists with 424 assists over her four-year career.

League Weekly Honorees: Six different Valpo players combined for eight weekly honors from the Horizon League office this season. Freshman pitchers Sierra Pico (Feb. 12, Mar. 18) and Taylor Weissenhofer (Mar. 5, May 6) were both named Pitcher of the Week twice for their efforts in the circle. Four different members of the Valpo lineup earned Player of the Week accolades over the course of the season as well: Joylyn Ichiyama (Feb. 12), Brittany Duncan (Mar. 5), Lindsey Norway (Mar. 11) and Janelle Bouchard (Apr. 22).

All-League Honorees: Valpo boasted a quintet of players who were honored by the Horizon League as it announced its postseason award recipients prior to the league tournament. Leading the way was fifth-year senior Joylyn Ichiyama, who earned First Team All-League honors for the second consecutive season. Sophomore Brittany Duncan and freshman Kaitlyn Ranieri both were named to the All-League Second Team. In addition, freshmen Janelle Bouchard and Taylor Weissenhofer each claimed a spot on both the All-League Second Team and the All-Newcomer Team.