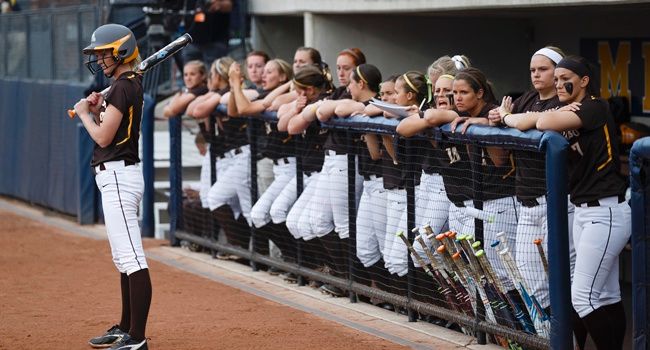 In its opening game of the Ann Arbor Regional of the 2013 NCAA Tournament, Valparaiso held #7/8 Michigan to its second-fewest runs scored at home this season, but the Crusaders could muster just two hits as the Wolverines downed Valpo by a 5-0 final.  The Crusaders will take on Central Michigan at 1:30 p.m. CT on Saturday afternoon.

Valpo was unable to get any offense going against Michigan starter Sara Driesenga, who set down the first 17 Crusaders she faced before junior Amanda Wisniewski (Skokie, Ill./Huntley) lined a single into right field for a two-out hit in the top of the sixth.  Redshirt junior Jessie Marinec (Alsip, Ill./Marist) got on the board as well with a liner into shallow left with two outs in the seventh.  Driesenga improved to 27-6 on the season with the win.

“[Driesenga] did a nice job of keeping the ball down all day, and we tried going other places in the box, tried to be patient with her,” said Crusader head coach Jordan Stevens.  “We got more aggressive as the game went on, but she just hammered it down and got the ball inside and we weren’t able to get to it. We just got on top of things, we weren’t really able to elevate anything, and rolled ground balls to them. She pitched great - she had a great game.”

A three-run first inning proved to be the difference for Michigan (46-10), as Lyndsay Doyle led off with a double and Sierra Romero drew a walk with one out.  Crusader starter Taylor Weissenhofer (Homer Glen, Ill./Lockport Township) induced a pop out to move within one out of escaping the inning unscathed, but Ashley Lane lined her 17th home run of the season over the left-field wall to give the Wolverines a 3-0 lead.

That would be the only big inning against the Crusaders defensively, however.  Michigan added a single run in the third as Lane drove in Romero with an RBI single, and then posted its final run in the bottom of the fourth on a run-scoring base hit from Doyle.  Weissenhofer took the loss to fall to 20-12 on the season for the Crusaders.  In the first inning, fifth-year senior Joylyn Icyhiama (Torrance, Calif./Redondo Union) fielded a sacrifice bunt and recorded the 425th assist of her career, breaking Valpo’s career record in the category.

“We’ve been in this situation before, just last weekend in the conference tournament, and the only thing I can tell [the team] after the game is that we have to do everything we can to play another game,” said Stevens on playing an elimination game next.  “It doesn't matter how it happens, it doesn't have to be pretty, it just has to end up in a ‘W.’ So we’ll go out tomorrow in the circle and at the plate just working as hard as we can - at the plate not to be an out, and attacking the strike zone in the circle.”

With the loss, Valparaiso (34-26) will face Central Michigan, which lost its opener to California 8-1, in an elimination game at 1:30 p.m. CT on Saturday afternoon.  The game between the Crusaders and Chippewas will be broadcast live on ESPN3.com, with links for the live video and live stats available at ValpoAthletics.com.