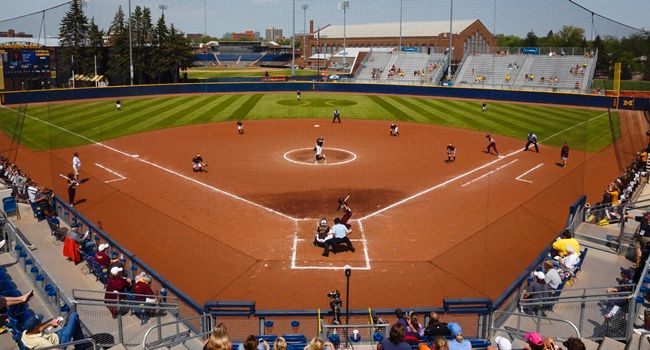 The Valparaiso softball team earned its first NCAA Tournament victory in program history Saturday afternoon, defeating Central Michigan 7-4 in an elimination game in Ann Arbor, Mich.  By virtue of the win, the Crusaders lived to play another elimination game, but Valpo fell in the final game of the day to #18/22 California 6-0, as Jolene Henderson tossed a no-hitter.

“Obviously it's great for the program and great for the players in the program to be able to have that experience,” said Crusader head coach Jordan Stevens on winning the first NCAA Tournament game in program history.  “We want to continue to build on where we've gone the last couple years, but we also don't want to be content with where we're at.  We want to keep get better and better - we want to make these tournament trips on a regular basis and try to get deeper and deeper into the tournament.”

Valpo would never trail in its win over the Chippewas in its first game of the day, taking the lead immediately in the top of the first inning.  Junior Kimberlin Wallace (Newton, Ill./Community [Lake Land C.C.]) drew a one-out walk and fifth-year senior Joylyn Ichiyama (Torrance, Calif./Redondo Union) followed with a single through the left side.

Redshirt junior Jessie Marinec (Alsip, Ill./Marist) then hit a grounder to the CMU second baseman, on which Ichiyama got into a rundown.  With Ichiyama in the pickle, Marinec reached first safely, and the senior continued to distract the Chippewa defense long enough for Wallace to round third and beat the throw home for the game’s first run.

The Crusaders added three more runs in the top of the fourth, thanks in large part to a Central Michigan miscue.  Sophomore Lindsey Norway (Chicago, Ill./Chicago Christian) led off the frame with a walk, followed by one-out singles from junior Amanda Wisniewski (Skokie, Ill./Huntley) and freshman Kaitlyn Ranieri (Schererville, Ind./Lake Central) to load the bases.

Wallace stepped to bat and chopped a two-hopper to the CMU shortstop, but her throw home was unable to be corralled by the catcher on the attempted force, going all the way to the backstop as both Norway and Wisniewski scored to make it 3-0.  Ranieri would score one batter later, sliding in ahead of a throw home on an RBI grounder from Ichiyama as the Crusaders led 4-0 through three and a half innings.

Having stranded four Central Michigan baserunners on base through three innings, freshman starter Taylor Weissenhofer (Homer Glen, Ill./Lockport Township) ran into trouble for the first time in the bottom of the fourth, surrendering a leadoff homer to Cory DeLamielleure as the lead shrank to 4-1.  Back-to-back base hits and a stolen base followed, as the Chippewas had two runners in scoring position with nobody out, but Weissenhofer induced a pop out, recorded a strikeout and rolled a ground ball to escape the inning with no further damage.

The Chippewas cut one more run off the Valpo advantage in the bottom of the sixth, as Trista Cox led off the inning with a solo homer down the left-field line.  CMU had a batter reach on a one-out error later in the inning, but a bunt attempt was popped up and a fly out ended the frame.

Valpo pushed three key insurance runs across the plate in the top of the seventh inning.  Sophomore Tarah McShane (Streamwood, Ill./St. Edward Central Catholic) reached on a leadoff error, and pinch-runner Hayley Bridwell (Lemont, Ill./Lemont) moved up to second two batters later on an infield single from junior Angie Doerffler (Fort Wayne, Ind./Concordia Lutheran).  Wisniewski stepped to the plate and drove the first pitch she saw over the left-center field wall for her fourth home run of the season, giving the Crusaders a 7-2 lead.

Central Michigan attempted a rally in the bottom of the seventh, picking up back-to-back one-out singles before a double from Cox plated both runners to move the Chippewas within 7-4.  But with two outs, Weissenhofer got CarolAnn Sexauer to swing and miss at strike three to close out the win, Valpo’s first in the NCAA Tournament in program history.

Weissenhofer went the distance against the Chippewas to improve to 21-12, giving up four runs on 10 hits and striking out nine CMU batters.  Kara Dornbos took the complete-game loss for Central Michigan (33-20).  Wisniewski went 3-for-4 in the win, while Ranieri added a pair of hits as well.

Having ensured their trip to the postseason would last at least three games, the Crusaders were unable to get anything going against Cal in their second game of the day.  The Golden Bears, also playing their second game of the day after falling earlier in the day 5-0 to Michigan, got a no-hitter in the circle from senior ace Jolene Henderson, the fourth no-hitter of her career.

For the second time in the three games at the regional, Valpo surrendered three runs in the first inning, as a bases-loaded walk to Breana Kostreba and a two-run single by Victoria Jones gave Cal a 3-0 lead after the top of the first.  The Golden Bears added a single run in the third and two runs in the fifth for the final margin.

Henderson improved to 32-10 on the year with the winning effort in the circle for California (38-18), while freshman Sierra Pico (North Las Vegas, Nev./Legacy) took the loss for Valpo, starting and pitching 4.2 innings.  Fifth-year senior Amanda Bolton (Scottsdale, Ariz./Horizon [Arizona]) faced two batters in relief and induced a line-out to escape a bases-loaded jam in the fifth, while Weissenhofer pitched the final two innings and struck out four batters.

Valparaiso closes out the 2013 season with a 35-27 record, having won the Horizon League Championship for a second straight season.  The loss to Cal closes out the careers of five Valpo seniors: Ichiyama, Bolton, Bridwell, Tori Brown (Harrison, Ohio/Harrison) and Jennifer Hermanson (Beecher, Ill./Beecher).  The latter four go down as the winningest class in Crusader softball history, amassing 146 victories over their four-year careers in Valpo uniforms.