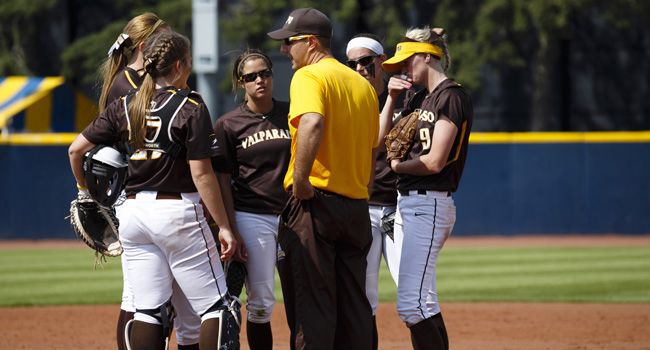 "Every year, our goal is to play at the highest level possible and our schedule this year allows us to do just that," said Stevens. "We are very excited to be playing in some of the places that we get to go and play the caliber of teams we get to play, all in preparation for the challenging Horizon League season."

The 2014 slate starts out Feb. 7-9 at the UNI Dome Invitational in Cedar Falls, Iowa. The Crusaders will take on the host Panthers, who advanced to the NCAA Tournament last season, twice. The tournament also features a re-match against Central Michigan, against whom Valpo earned its first NCAA Tournament win in program history last year, as well as games against Drake and Saint Louis.

The next weekend, Valpo will travel to Lafayette, La. for the Ragin' Cajun Invitational, hosted by perennial power Louisiana. The Ragin' Cajuns ended last season ranked #12 nationally and earned a berth in the NCAA Super Regionals. The Crusaders will also face Central Arkansas (twice), Boston College and Memphis in Lafayette.

After a weekend off, the Crusaders' spring break trip will commence at the Wildcat Invitational in Tucson, Ariz. Feb. 28-Mar. 2. While the schedule for the tournament, hosted by eight-time national champions Arizona, has not yet been set, other teams in attendance include 2013 NCAA Tournament participant San Jose State, Indiana, UT-Arlington and Northern Colorado.

Valpo then ventures north to play in the state of Idaho for the first time in program history Mar. 7-9 at the Springhill Suites Invitational in Boise, Idaho. The Crusaders will play two games apiece against Weber State and host Boise State, as well as one contest against Indiana.

The spring break trip concludes in the middle of the Pacific Ocean, as the Crusaders will travel to Honolulu, Hawaii to take part in the Rainbow Wahine Classic Mar. 12-15. Every team in the tournament field advanced to the NCAA Tournament last year, including one Super Regional participant in #9 Oregon, as well as James Madison, BYU and the host Rainbow Wahine. Following one game apiece against each of the other teams, bracket play will be held to crown a tournament champion.

Upon their return to the mainland, Valpo hosts Western Michigan on Mar. 19 for a single game to kick off the home slate. The Crusaders will also host North Dakota (Apr. 4) and Northern Illinois (Apr. 8) for single home games, as well as Eastern Michigan (Apr. 2) and IUPUI (Apr. 29) for home doubleheaders in non-league action. Valpo travels to Eastern Illinois (Mar. 26), Notre Dame (Apr. 15) and Western Illinois (Apr. 22) for single games outside of league play as well.

Horizon League play kicks off for the Crusaders at Youngstown State Mar. 22-23. The league slate, in which every team will play one three-game series against every other team, sees Valpo host Detroit (Apr. 5-6), Cleveland State (Apr. 12-13) and Oakland (Apr. 18-19), while the Crusaders will also travel to UIC (Mar. 29-30), Wright State (Apr. 26-27) and Green Bay (May 3-4). The Horizon League Championship will be contested May 7-10 at the home of the regular season champion, with the tournament champion earning the league's automatic berth into the 2014 NCAA Tournament.