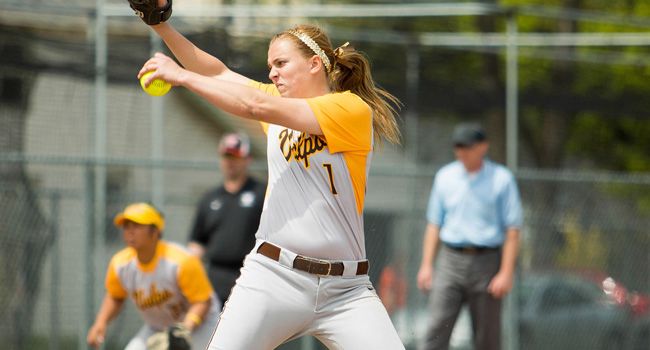 Taylor Weissenhofer was tabbed preseason Pitcher of the Year by College Sports Madness.

Four Valparaiso softball players have been selected to the College Sports Madness preseason All-Horizon League teams, highlighted by the choice of sophomore Taylor Weissenhofer (Orland Park, Ill./Lockport Township) as the league's Pitcher of the Year.

Weissenhofer, who also earned a spot on the preseason First Team, enjoyed one of the most dominant seasons by a pitcher in Crusader history last year as a freshman. A Second Team All-League and All-Newcomer Team honoree, Weissenhofer went 21-12 with six saves, a 2.43 ERA and 234 strikeouts in 195.2 innings pitched during her rookie campaign. She paced the league and set a new Valpo single-season record for strikeouts, ranking 30th nationally in strikeouts per seven innings. Weissenhofer also led the league in saves, ranked second in wins, third in opponents' batting average and fifth in ERA.

Weissenhofer led the group of four Crusader honorees, all four of whom enter the 2014 campaign as sophomores. She was joined on the preseason First Team by catcher Janelle Bouchard (Kennebunk, Maine/Kennebunk) and outfielder Kaitlyn Ranieri (Schererville, Ind./Lake Central). Bouchard, a Second Team All-League and All-Newcomer Team choice last year, hit .323 with 23 runs scored and 53 RBIs, leading the league in runs batted in with a mark which ranks second in Crusader history. She also tied for the league lead with 15 doubles, and capped her season by being named Most Valuable Player of the league tournament, hitting .529 with a record-tying 10 RBIs, four runs scored and four doubles in helping the Crusaders capture their second straight league title.

Ranieri was also a Second Team All-League choice last year following a stellar freshman campaign. Ranieri hit .314 with 35 runs scored and 16 RBIs as a rookie, ranking fifth in the league in runs scored. She finished second among Horizon League players with 31 walks and 61 hits in 2013 as well, marks which were good for second and fifth, respectively, in Valpo's single-season record book.

Sophomore pitcher Sierra Pico (Las Vegas, Nev./Legacy) rounded out the quartet of Valpo preseason honorees, earning a spot on the Second Team. The two-time league Pitcher of the Week posted an 11-10 record with 64 strikeouts and a 3.88 ERA as a freshman in 2013. Pico ranked seventh in the league in wins and tenth in strikeouts as a freshman.

Valparaiso opens the 2014 campaign this weekend at Campbell's Hampton Inn Invitational in Buies Creek, N.C., kicking off with games Friday against IPFW and the host Camels.