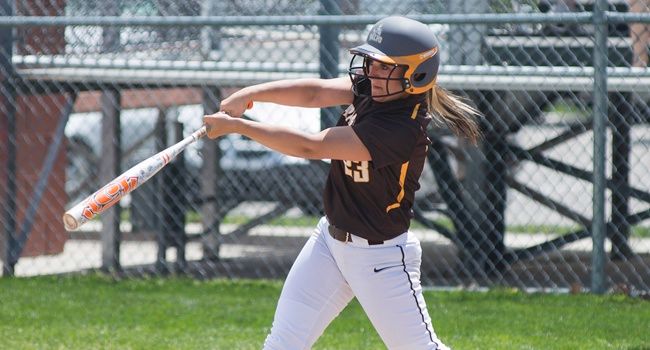 The Valparaiso softball team was unable to get its spring break trip off on a winning note Friday, falling to Iowa (8-0) and #10/9 Arizona (9-1) on the opening day of the Wildcat Invitational in Tucson, Ariz.

The Crusaders were unable to get anything going offensively before Iowa took control in the opener, as the Hawkeyes scored six runs after two were out in the bottom of the third.  Valpo loaded the bases with one out in the fourth, but could not convert the baserunners into runs, and Iowa added single runs in the fourth and fifth innings to close out the game.

Mollie Lindeman (Hebron, Ind./Hebron [Purdue North Central]) took the loss in the circle for the Crusaders, falling to 1-2 after surrendering six runs in three innings of work.  Kayla Massey improved to 2-6, earning the complete-game win for Iowa (4-9).  Five different Crusader batters picked up a single apiece, but Valpo was 0-for-6 with runners in scoring position in the opener.

“We continue to allow big innings and aren’t able to get out of them,” said Crusader head coach Jordan Stevens following the first game of the day.  “Our pitching staff has to get tougher in all situations.  Our hitters have to be tougher with runners on base as well.  We didn’t play that poorly to get run-ruled and we had plenty of chances, but we continue to struggle with the little things and that will continue to hurt us until we start doing them consistently.”

Facing its second nationally-ranked opponent in as many tournaments, Valpo took the lead on the host Wildcats in the top of the first.  With two outs, sophomore Kaitlyn Ranieri (Schererville, Ind./Lake Central) reached on a two-strike single, and then came all the way around to score on an RBI double from freshman Sam Stewart (Frankfort, Ill./Lincoln-Way East).

Arizona’s Kellie Fox single-handedly gave the Wildcats a 3-1 edge through three innings, connecting on a two-run homer in the bottom of the first and then a solo shot in the third.  Valpo threatened in the top of the fourth, putting runners on second and third with nobody out, but Arizona reliever Shelby Babcock entered and registered three straight outs, and the Wildcats scored six over the next two innings to finish out the contest.

Sophomore Taylor Weissenhofer (Orland Park, Ill./Lockport Township) fell to 1-2 for the Crusaders, giving up six runs in four-plus innings of work in the circle.  Michelle Floyd went three-plus innings for Arizona (17-1) to improve to 4-0 on the year.  Ranieri picked up a pair of hits to lead the Valpo offense.

“We really played better than the score indicated, up until another large inning killed our chances,” said Stevens.  “We couldn’t find the plate and allowed Arizona some easy runs.  We swung the bat better in our second game and played good defense all day, but still need to work to get better.  Tomorrow is a new day.”

Valparaiso (2-9) continues play from Tucson on Saturday with two more games.  The Crusaders will take on Indiana at noon CT and follow immediately against Longwood at 2 p.m.  Live stats and video for both games will be available through ValpoAthletics.com.