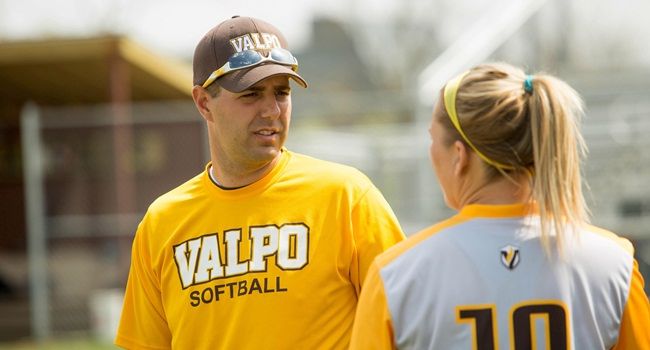 Next Up in Crusader Softball: The Valparaiso softball team looks to get Horizon League play off on the right foot this weekend as the Crusaders open the league slate with a three-game series at Youngstown State. The opening series is a rematch of last season’s final day of the Horizon League Championship, when Valpo downed the Penguins twice to claim the league title.

Head Coach Jordan Stevens: In his fourth season at the helm of the Valparaiso softball program, Jordan Stevens has led the Crusaders to new heights through his first three years, as Valpo has captured the Horizon League Championship each of the last two seasons and earned the program’s first-ever NCAA Tournament win last year. Stevens enters this weekend with a 116-85-1 record at the helm of the Crusaders.

Series Notes: Valpo owns a 27-7 advantage in the all-time series over the Penguins and went 4-2 in six meetings with YSU last year. Three of those matchups came at the Horizon League Championship, where YSU run-ruled the Crusaders in the opener before Valpo came back to earn 2-1 and 11-9 wins on Championship Saturday to win the league title. The Crusaders have not played the Penguins in Youngstown since Apr. 17, 2011, sweeping YSU 4-2 and 14-11 that day.

A Challenging Schedule: The Crusaders’ 2014 schedule will prepare the team well for Horizon League play, featuring at least ten games against NCAA Tournament teams from a season ago. Valpo is currently slated to take on four teams ranked nationally as well. The Crusaders lost a narrow-one run game to #20/20 Louisiana early in the season, and faced #10/9 Arizona in the first weekend of their spring break trip. Valpo took on #2/4 Oregon out in Hawaii last weekend, and a matchup against #25/24 Notre Dame awaits later this spring.

Schedule Adjustments: The brutal Northwest Indiana winter has already forced a number of schedule changes to the Crusaders’ slate. Valpo’s scheduled home opener against Western Michigan was postponed from the 19th and will be made up later this spring. The game at Eastern Illinois, originally slated for the 26th, will now be played on Thursday, March 27. In addition, Valpo’s suspended game against Indiana from the Arizona tournament could still be completed later this spring as well.

McShane Earns All-Tournament Award: Junior Tarah McShane represented the Crusaders last weekend on the All-Tournament Team at the Rainbow Wahine Classic. McShane tallied a base hit against James Madison and picked up a run-scoring hit versus #2/4 Oregon. Then on Friday, the junior led the way in Valpo's win over BYU, knocking in a run with a single as part of a three-run fifth inning before stepping to the plate with the game tied in the seventh and connecting on a two-run homer to secure the 6-4 win. McShane is the second Crusader to earn All-Tournament honors this spring [Wisniewski - Louisiana].

Weissenhofer Rounding Into Form: After early-season struggles, sophomore pitcher Taylor Weissenhofer - College Sports Madness’ preseason HL Pitcher of the Year - seems to be rounding into form approaching league play. Over her last three appearances out in Hawaii, Weissenhofer gave up just one run in 7.2 innings of work in the circle, including three shutout innings against #2/4 Oregon. She surrendered just five hits over that stretch while striking out seven batters.

All or Nothing: Once per tournament so far this season, the Crusaders have had a big offensive explosion of at least six runs, with last weekend’s coming in a 6-4 win over BYU. But Valpo has also struggled offensively in a number of games, as 23 games into the year, the Crusaders have been shut out on nine occasions and have also scored just one run three other times.