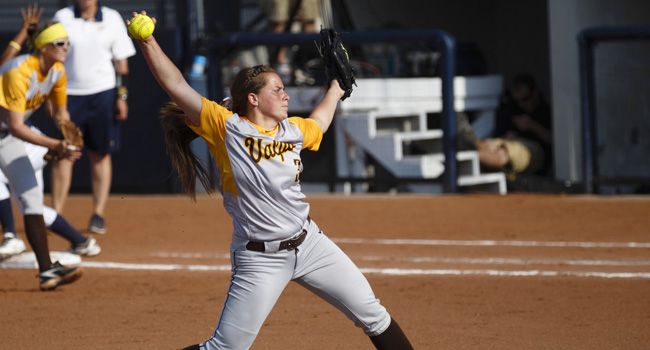 The Valparaiso softball team was limited to just two hits Thursday afternoon in Charleston, Ill., as Eastern Illinois defeated the Crusaders by a 3-0 final.

The Panthers got the only run they would need in the top of the first, as Jennette Isaac reached on a leadoff bunt and would eventually come around to score on a sacrifice fly by Reynae Hutchinson.  Valpo put a runner aboard in the second on a walk, in the third on an error and in the fifth on a triple from senior Angie Doerffler (Fort Wayne, Ind./Concordia Lutheran), but could not push anything across home plate in any of the three instances.

The Crusaders nearly took the lead in the top of the sixth inning.  Still trailing just 1-0, sophomore Kaitlyn Ranieri (Schererville, Ind./Lake Central) fouled off five pitches after falling behind in the count 1-2, eventually working a full-count walk.  Freshman Sam Stewart (Frankfort, Ill./Lincoln-Way East) stepped in and drove a pitch to deep right field, but the EIU right fielder caught it a step or two in front of the fence to keep the Crusaders off the board.

EIU added two runs in the bottom of the sixth, as Carly Willert led off the inning with a solo home run and April Markowski added an RBI single up the middle later in the frame.  Trailing by three runs, the Crusaders brought the tying run to the plate in the seventh following a single by senior Amanda Wisniewski (Skokie, Ill./Huntley) and an EIU error, but a groundout closed out the game.

“Right now, anytime we can get out and play is to our benefit, because unfortunately we never know when the next opportunity to do that is going to be right now,” said Crusader head coach Jordan Stevens.  “I thought we were in a good place coming into today from last weekend, but we came out a little flat today and put ourselves in an early hole.  We had a couple players take very good swings throughout their at-bats, but we have to do that in all nine spots in the order.  I was pleased with the way Sierra bounced back after a rough first inning, and thought overall she threw well enough to give us a chance to win.  We have to get back to work tomorrow to fix some things before taking on UIC this weekend.”

Valparaiso (6-20) returns to Horizon League play this weekend with a three-game series against UIC, now being played at DePaul.  The series opens with a single game Saturday at 2:30 p.m., and live stats for all three games this weekend will be available through ValpoAthletics.com.