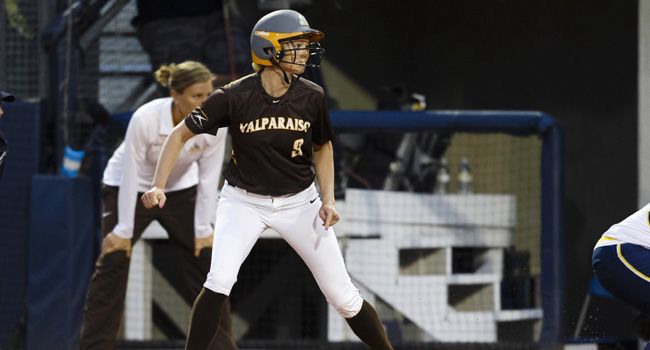 Next Up in Crusader Softball: The Valparaiso softball team will start its home schedule with a bang this week, playing seven games over five days at the Valparaiso University Softball Field. Four non-league games will open the home slate before a three-game Horizon League series against Detroit this weekend.

Following the Crusaders: Live stats will be available for all of this week’s games. WVUR will be broadcasting Wednesday’s doubleheader, while the Horizon League Network will have video coverage of this weekend’s series against Detroit. Links for all of the above are available through ValpoAthletics.com.

Head Coach Jordan Stevens: In his fourth season at the helm of the Valparaiso softball program, Jordan Stevens has led the Crusaders to new heights through his first three years, as Valpo has captured the Horizon League Championship each of the last two seasons and earned the program’s first-ever NCAA Tournament win last year. Stevens enters this weekend with a 118-88-1 record at the helm of the Crusaders.

Series Notes: Valpo is just 6-18 all-time against Western Michigan, but won a pair of games (4-3, 1-0) over the Broncos in Kalamazoo last season. The Crusaders are 2-1 against Eastern Michigan, sweeping a road doubleheader (5-4, 3-2 [8]) last year. Valpo captured its only matchup in program history with North Dakota, downing UND at UNI in 2010, 9-1. The Crusaders own a 28-18 edge in the all-time series with Detroit and took two out of three last season in Detroit.

A Challenging Schedule: The Crusaders’ 2014 schedule has prepared the team well for Horizon League play, featuring at least ten games against NCAA Tournament teams from a season ago. Valpo has already taken on three teams ranked nationally as well. The Crusaders lost a narrow-one run game to #20/20 Louisiana early in the season, and faced #10/9 Arizona in the first weekend of their spring break trip. Valpo took on #2/4 Oregon out in Hawaii, and a matchup against #25/24 Notre Dame awaits later this spring.

Home Field Advantage: Valparaiso has been above the .500 mark at home in each of the last four seasons, going 48-16-1 (.746) at the Valparaiso University Softball Field during that stretch. The Crusaders have also been remarkably consistent during league play at home over the last four years, winning eight or nine games each season and posting a 34-10 (.773) record in home league games.

Another Day, Another Change: It only seems as if every day this spring has featured a schedule adjustment thanks to weather for the Crusader softball team. Below is a list of changes pending and over the coming week:
- vs. Indiana (at Arizona) suspended in the 5th inning; completion later this spring a possibility
- home vs. Western Michigan postponed from March 19 to April 1
- home doubleheader vs. Eastern Michigan April 2 moved up to 2 p.m.
- home game vs. Northern Illinois April 8 changed to doubleheader, moved to 2 p.m.

Splitting Start to League Play: The Crusaders have split each of their first two Horizon League series, winning one and losing one at both Youngstown State and UIC. The splits have come against two of the upper division picks in the preseason poll (UIC - 2nd; YSU - 4th) and both on the road as well. In fact, Valpo’s league slate this year has the Crusaders going on the road to play the teams picked 2nd, 3rd, 4th and 6th in the preseason poll, while Valpo hosts the squads picked 5th and tied for 7th.

A New Home Run Threat: Sophomore Kaitlyn Ranieri entered Sunday’s twinbill against UIC with just two career home runs to her name, but doubled that total, as she led off the top of the first and the top of the third in the nightcap with solo home runs. In fact, Ranieri also had a home run in the second game at YSU, meaning that after hitting just one round-tripper in her first 85 games, the sophomore has three homers in the last four games. On the season, Ranieri leads the Crusaders with a .309 average, 20 runs scored and 16 walks.

Doerffler Extends Hit Streak: Senior Angie Doerffler now has hits in four straight games after hitting safely in all three games last week. Doerffler picked up just her second career triple at Eastern Illinois on Thursday, and went 2-for-2 in the opener against UIC on Sunday. Then, moved into the three-hole in the batting order for the first time in her career, Doerffler delivered a key two-run double in the nightcap win over the Flames.

Weissenhofer Picks Up Another W: Sophomore pitcher Taylor Weissenhofer earned her second win in as many decisions in Horizon League play with a complete-game seven-hitter in the win over UIC on Sunday. For Weissenhofer, that performance continued her strong recent run, as the sophomore is now 3-0 with a 1.42 ERA over Valpo’s last eight games, giving up just four runs in 19.2 innings of work while striking out 15 batters.