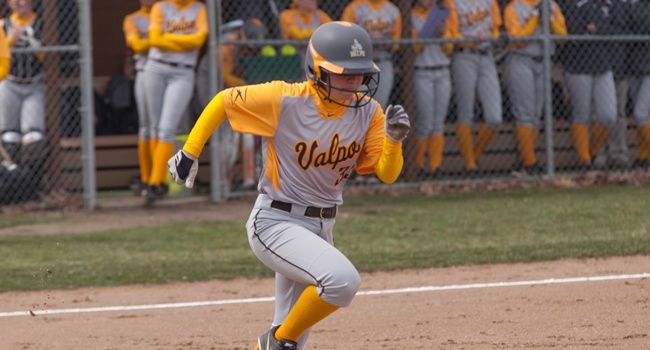 Big innings proved instrumental in both games as the Valparaiso softball team split a home doubleheader Wednesday afternoon against Eastern Michigan.  The Crusaders scored 11 runs over the final two innings to earn a 13-3 victory in six frames in the opener, but the Eagles combined for nine runs in the first and last innings of an 11-7 decision in the nightcap.

Valpo actually got off to a slow start offensively in the opener, as the first nine Crusaders were set down in order, while Eastern Michigan scored single runs in the first and fourth innings to go ahead 2-0.  But the Crusaders tied it up quickly in their half of the fourth, as sophomore Kaitlyn Ranieri (Schererville, Ind./Lake Central) led off with a double to the left-center gap, and two batters later, senior Amanda Wisniewski (Skokie, Ill./Huntley) connected on her team-best seventh home run of the season.

Valpo actually had a chance to add to the lead in that same frame, putting two runners in scoring position with only one out, but a pop-out and a strikeout kept the game tied.  Eastern Michigan briefly reclaimed the lead in the top of the fifth on a double steal, pulling ahead 3-2.

The Crusaders took the lead for good in the bottom half of the fifth, however.  Freshman Taylor Lawson (Tucson, Ariz./Sahuaro) reached on a one-out error and came around to score on an RBI double from fellow rookie Jorgi Calombaris (Frankfort, Ill./Lincoln-Way East).  Back-to-back walks followed, the latter forcing Ranieri across the plate to make it 4-3 Valpo.

Sophomore Janelle Bouchard (Kennebunk, Maine/Kennebunk) kept the train rolling with a grounder back up the middle, plating both Calombaris and Wisniewski.  After a fielder’s choice forced Valpo’s lead runner, senior Amanda Korb (Indianapolis, Ind./Lutheran) poked a single the other way inside the right-field line to score Bouchard and cap the five-run frame.

Carrying a four-run lead into the sixth, the Crusaders needed four more runs to end the game via run rule, and would go above and beyond with a six-run inning.  An infield grounder from Wisniewski drove in the first run of the frame, and RBI base knocks by junior Tarah McShane (Streamwood, Ill./St. Edward Central Catholic) and freshman Sam Stewart (Frankfort, Ill./Lincoln-Way East) pushed the Valpo lead to 10-3.  Korb then put the cherry on top of the win, launching a three-run homer for the final margin.

Sophomore Taylor Weissenhofer (Orland Park, Ill./Lockport Township) earned the complete-game win for the Crusaders to improve to 6-5, scattering seven hits and striking out six while walking no Eagle batters.  The first of three EMU pitchers, Lindsay Rich took the loss, giving up five runs in 4.1 innings of work.  Bouchard and Korb both had two hits to pace the 10-hit Valpo attack, the latter driving in four runs as well, while Wisniewski scored three runs and tallied three RBIs.

"I thought Taylor threw well today," said Crusader head coach Jordan Stevens.  "She was able to get out of some jams and her command was very good today.  It's been nice to see some of her pitches come back and work for her over some very good outings her last few times out."

The nightcap got off to a rough start for the Crusaders, as EMU plated four runs in the top of the first on just two hits, taking advantage of an error and three walks.  Valpo slowly chipped away at the deficit, however, scoring twice in the second inning.  First, the Crusaders received an RBI single from senior Angie Doerffler (Fort Wayne, Ind./Concordia Lutheran), and then Korb would later scamper home on a wild pitch to make it 4-2.  The Crusaders added another tally in the third inning, as Wisniewski lined a one-out single into left field and scored two batters later on a base hit courtesy of Bouchard.

The Eagles again took advantage of Valpo miscues to plate a run without the benefit of a hit in the top of the fourth, thanks to an error and three walks.  But the Crusaders got that run right back in the bottom half of the inning, as Calombaris knocked a two-out single back through the middle to score Korb and cut the deficit to 5-4.

EMU scored another insurance run in the sixth on two walks, a single and a bases-loaded free pass, but the Crusaders took the lead for the first time in their next at-bat.  Lawson led off the inning with a single, and back-to-back EMU errors brought the freshman across the plate.  Ranieri, the beneficiary of the first error, followed by scoring on a wild pitch to tie the game at 6-6, and two batters later, Bouchard picked up yet another run-scoring hit, this one scoring Calombaris to give the Crusaders a 7-6 edge.

But the one-run lead would not be enough, as the Eagles had the last big inning of the day, plating five runs in their half of the seventh.  After a leadoff walk, the Crusaders got the first out on a popped-up bunt, but EMU got base hits from six of their next seven batters to score the five runs and go up 11-7.  Lawson reached on a one-out infield single in the Crusaders’ last chance, but could not advance past second base.

"You look at all of the big innings we've given up this year, and the common theme has been walks and errors," said Stevens.  "A lot of these big innings, as with the first inning in the second game today, we're not really making our opponents earn much of anything - we're giving them free runs.  We have to stop doing that if we're going to be successful."

Sophomore Mollie Lindeman (Hebron, Ind./Hebron [PNC]) went nearly the distance in relief, entering with two outs in the first and going the rest of the way.  Lindeman struck out a career-high 11 batters, but also surrendered 10 hits and walked seven as she fell to 1-5 on the season.  Rich entered in relief with one out in the sixth for Eastern Michigan (9-22) and registered the final five outs to improve to 4-11.

Korb went 3-for-4 with two runs scored to lead the Valpo offense in the nightcap, capping a five-hit day.  Bouchard recorded her second straight multi-hit game as well, going 2-for-3 with two RBIs, while Lawson also picked up a pair of base hits.

"We've got hitters working offensively, putting in the time to get better," said Stevens. "It's good to see some of them reap the benefit of that work today."

Valparaiso (8-23) hosts North Dakota in non-league action at the Valparaiso University Softball Field at 3 p.m. Friday evening.  The game will be broadcast live on WVUR, 95.1 FM, Valparaiso, with links for the live audio and live stats available at ValpoAthletics.com.