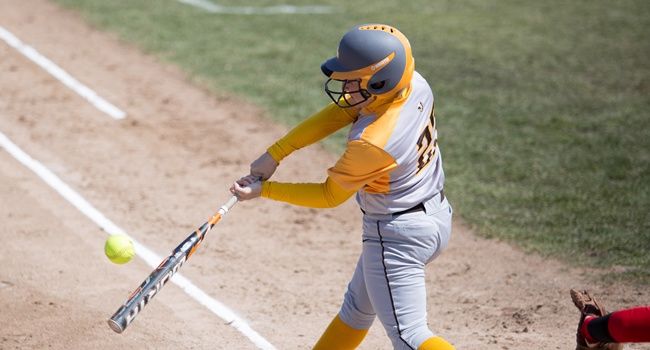 In a game full of many twists and turns, it was Valparaiso’s Kaitlyn Ranieri (Schererville, Ind./Lake Central) who delivered the final blow, driving a double to the left-center gap to score Taylor Lawson (Tucson, Ariz./Sahuaro) as the Crusaders walked off with the 7-6 win in eight innings over Cleveland State.  Valpo ends the weekend at 7-3 in Horizon League play and atop the league standings.

“I was really pleased with the way we played today – we were just very resilient,” said Crusader head coach Jordan Stevens.  “I thought we took very good swings from the get-go, even though we didn't score in the first inning.  It was a very good team win with lots of players stepping up and playing well.”

It looked like Ranieri had delivered the potential game-winning RBI two innings earlier, helping the Crusaders break a 4-4 tie in the bottom of the sixth.  Valpo had two outs and nobody on, but the freshman Lawson lined a single just inside the third-base bag to reach.  Ranieri followed by turning on a pitch and lining it into medium-deep right-center for a single, and with the speedy Lawson on the basepaths, head coach Jordan Stevens aggressively sent the rookie home.  Lawson successfully slid in ahead of the tag to put Valpo on top, 5-4.

Crusader pitcher Taylor Weissenhofer (Orland Park, Ill./Lockport Township) set down the first two Vikings in order in the top of the seventh, but CSU’s Hannah Yoe reached on a bang-bang play at first with an infield single.  A sharp single from Cynthia Woodard kept the Viking inning alive, and back-to-back four-pitch walks forced Yoe across the plate with the game-tying run.  Then, on a full-count pitch, Katelind Phillips cued a ball about 15 feet down the third-base line – a ball which hit in foul territory before spinning back fair and resulting in an infield single as Woodard crossed the plate to give CSU the 6-5 lead through six and a half innings.

But the Crusaders wasted no time making sure that the game would at least head into extra innings, as senior Amanda Wisniewski (Skokie, Ill./Huntley) launched a no-doubt homer over the right-field fence on the first pitch of the bottom of the seventh to tie the game at 6-6.  For Wisniewski, it was her ninth round-tripper of the year, tied for fourth-most in a single year in program history, and the 27th homer of her Crusader career.

The next three Crusaders were set down in order as the game headed to extras, and following a two-out walk, Weissenhofer registered a strikeout to keep CSU off the board in the eighth.  Freshman Sam Stewart (Frankfort, Ill./Lincoln-Way East) led off the bottom of the frame with a single, but was erased on a double play.  Just like they did in the sixth, however, Lawson and Ranieri teamed up with two outs and nobody on.  Lawson sent a grounder to the left of the third baseman and used her wheels to easily beat it out.  Then, after taking two balls well off the plate, Ranieri got a pitch to her liking and drilled it to the left-center gap, more than enough to allow Lawson to cross the plate standing up with the game-winning run.

As it did in both games on Saturday, Cleveland State struck first on Sunday, plating three runs in the top of the second.  It looked like Mollie Lindeman (Hebron, Ind./Hebron [PNC]) would escape with no damage following a leadoff triple, getting the next two batters in order, but three consecutive doubles scored three runs for the Vikings.  Valpo responded immediately in the bottom of the second, as with one on and two out, senior Angie Doerffler (Fort Wayne, Ind./Concordia Lutheran) connected on just her second career home run, cutting the CSU advantage to 3-2.

CSU pushed its lead to two runs on a sacrifice fly in the top of the fourth before the Crusaders tied the game in the bottom of the fifth.  Ranieri led off the frame with a single, and two batters later, Wisniewski worked a full-count walk to put two runners on base.  Following a pitching change and a 17-minute delay for maintenance work on the dirt in the pitcher’s circle, junior Tarah McShane (Streamwood, Ill./St. Edward Central Catholic) stepped in and drove a pitch to the wall in left-center for a double, scoring both runners to tie the game at 4-4 and set the stage for the late innings.

Lindeman started in the circle for Valpo and went 5.1 innings, striking out six in the no-decision.  Weissenhofer entered in relief with one out in the sixth and tossed the final 2.2 innings to improve to 10-6 on the year.  Cleveland State (18-13, 2-3 Horizon) reliever Susan Knight threw the last 3.1 innings for the Vikings, taking the loss to fall to 8-10.  Ranieri went 3-for-5, her third consecutive multi-hit game and her eighth multi-hit game in 10 Horizon League games this year, to lead the Crusader offense, while Lawson, Stewart and sophomore Janelle Bouchard (Kennebunk, Maine/Kennebunk) all had two-hit games as well.

Valparaiso (15-24, 7-3 Horizon) continues league play on Friday afternoon as the Crusaders host Oakland in a single game at 3 p.m.  The game can be seen live on the Horizon League Network, with links for the live video and live stats available at ValpoAthletics.com.

“I think we've played really well in league play so far,” said Stevens.  “But even though we are in a good spot right now, we can't get complacent – we have another tough series coming up next weekend, so we can't be happy with where we're at.  We’ve been playing really well, but there’s still room for improvement.”