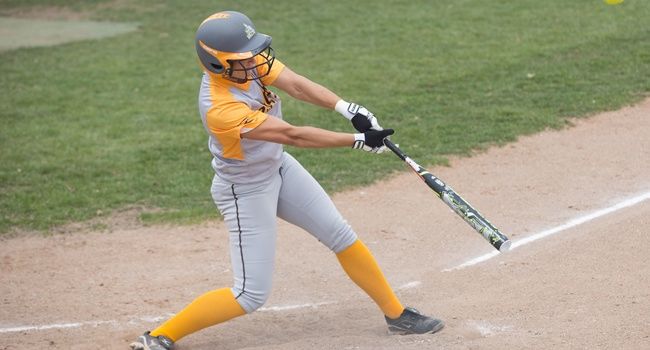 The Valparaiso softball team continued its strong play of late Tuesday in Macomb, Ill., sweeping a non-league doubleheader from Western Illinois by scores of 3-1 and 5-4, holding off Leatherneck threats in the seventh inning of both games.  With the pair of wins today, the Crusaders have now won 11 of their last 13 games.

“It goes to show that we’re starting to play the game with some toughness, to get out some of the situations we faced in both games today and still come out with two wins,” said Crusader head coach Jordan Stevens.  “Western Illinois had a lot of chances they created, and we were able to get out of a lot of them, especially in the late innings.  That was good to see, both defensively and from our pitching staff.”

The Leathernecks struck first in the opening game, scoring in the bottom of the first as Sammy Marshall led off the frame with a bunt single and eventually scoring on a dropped fly ball.  But Valpo would get that run back in the third with a two-out rally.  Freshman Jorgi Calombaris (Frankfort, Ill./Lincoln-Way East) worked her way to a full count before lining a double to the right-center gap, and senior Amanda Wisniewski (Skokie, Ill./Huntley) grounded the first pitch she saw back through the middle to score Calombaris and tie the game at one.

Both teams got a runner into scoring position in the fourth without scoring, and Valpo would close out the scoring in the fifth inning.  Sophomore Kaitlyn Ranieri (Schererville, Ind./Lake Central) led off with a double the opposite way, and after a sacrifice bunt moved her to third, Wisniewski took three straight balls to start the at-bat.  The senior was then given the green light with a 3-0 count and took full advantage, drilling a shot over the center-field fence to make it 3-1 Crusaders.  The home run was Wisniewski’s tenth of the season, tied for third-most in a season in program history, and the 28th of her career.

Valpo starter Taylor Weissenhofer (Orland Park, Ill./Lockport Township) stranded a leadoff single in the sixth on third base, inducing a pop-out back to the circle to maintain the two-run lead.  Western Illinois led off the seventh with a base hit, prompting Stevens to call for sophomore Mollie Lindeman (Hebron, Ind./Hebron [PNC]) out of the bullpen.  After registering the first out, the Leathernecks connected on a double to put the potential tying runs in scoring position with just one away.  But Lindeman bore down to get a strikeout for the second out, and a lineout to left would end the game in the Crusaders’ favor.

Weissenhofer improved to 12-7 on the year with the win in six-plus innings of work, scattering five hits without surrendering an earned run.  Lindeman picked up the save with her inning out of the bullpen.  Hailey Bickford took the complete-game loss for Western Illinois to fall to 4-9.  Ranieri and Wisniewski both had two hits apiece in the opener, the latter also walking once, while freshman Sam Stewart (Frankfort, Ill./Lincoln-Way East) reached base twice as well.

Valpo had a golden chance to score in the top of the first of the nightcap, loading the bases with just one out, but a pair of strikeouts kept it off the board.  The Crusaders would not fall victim to the same fate in the second inning, however.  Stewart led off the inning with a single off WIU pitcher Kacyee Hart, and two batters later, freshman Taylor Lawson (Tucson, Ariz./Sahuaro) was credited with a single after Stewart was obstructed on her way to second base.  Ranieri made the Leathernecks pay, driving a 0-1 pitch deep to right-center field for her eighth homer of the season, giving Valpo a 3-0 lead.

Western Illinois answered immediately with three runs in its half of the second.  The Leathernecks loaded the bases with one out on two walks and an infield single, but Crusader starter Sierra Pico (Las Vegas, Nev./Legacy) recorded the second out on a strikeout.  A pair of Valpo error on the next batter allowed Western Illinois to tie the game, though, as a ground ball ended up deep in the outfield, allowing the bases to empty as the game was tied up at 3-3.

The Leathernecks loaded the bases in the third inning as well, but Pico induced a groundout to strand all three runners, and both teams left two on base in the fourth.  Valpo reclaimed the lead in the fifth, as sophomore Janelle Bouchard (Kennebunk, Maine/Kennebunk) led off with a walk and eventually came around to score on a double to the wall in right from senior Angie Doerffler (Fort Wayne, Ind./Concordia Lutheran) to make it a 4-3 Crusader lead.

Valpo put two on with one out in the sixth, but could not push home an insurance run, and Western Illinois tied the game with one out in its half of the frame on a solo homer from Marshall.  But Valpo responded with the eventual game-winner in the seventh.  Stewart worked a one-out walk, and a single from Doerffler moved pinch-runner Kimberlin Wallace (Newton, Ill./Community [Lake Land C.C.]) to second.  Both runners advanced 60 feet on a wild pitch, and Wallace crossed the plate when Lawson turned on a pitch and grounded it through the right side as Valpo went ahead 5-4.

Western Illinois put the potential tying run on base on a one-out error by the Crusaders in the bottom of the seventh, and for the second time on the day, Stevens made the move for Lindeman out of the bullpen.  The Leathernecks greeted her with a single, moving the lead runner up to second base, but again Lindeman came up with a key strikeout for the second out, and a fly to left completed the Crusaders’ sweep.

Pico tossed the first five innings and was strong, surrendering no earned runs while striking out three and stranding eight WIU runners on base.  Senior Ashlyn Michalak (Temperance, Mich./Springfield [Owens C.C.]) earned her first career win out of the bullpen, improving to 1-2 this year as she recorded four outs, while Lindeman picked up the final two outs for her second save of the day and third of the season.  Kacyee Hart went the distance for Western Illinois (18-21-1), falling to 6-5 on the season.

“It was good to see our entire pitching staff contribute today against a good offense, and keep them at bay for the most part,” said Stevens.  “It’s been nice to see over the last week or so that our staff is putting together solid games and giving our team good chances to win.”

Calombaris, Doerffler, Lawson and Ranieri all had two hits in the nightcap win, while Calombaris also drew a walk to reach base three times.  Ranieri extended her hitting streak to 13 consecutive games with the pair of multi-hit efforts, and has tallied at least two hits in nine of those 13 contests.

“It’s always good to see production throughout the lineup,” said Stevens as seven different players tallied at least two hits over the two games.  “If we can get one through nine in the order going, it’s a tough lineup to have to pitch against.  It was really good to see the way our offense bounced back from Saturday, but we need to continue to have good at-bats up and down the lineup.”

Valparaiso (19-25) will take on its fourth nationally-ranked opponent of the year Thursday evening, as the Crusaders make the short trip east to take on #21/21 Notre Dame.  First pitch is slated for 5 p.m. CT, with live stats available through ValpoAthletics.com.