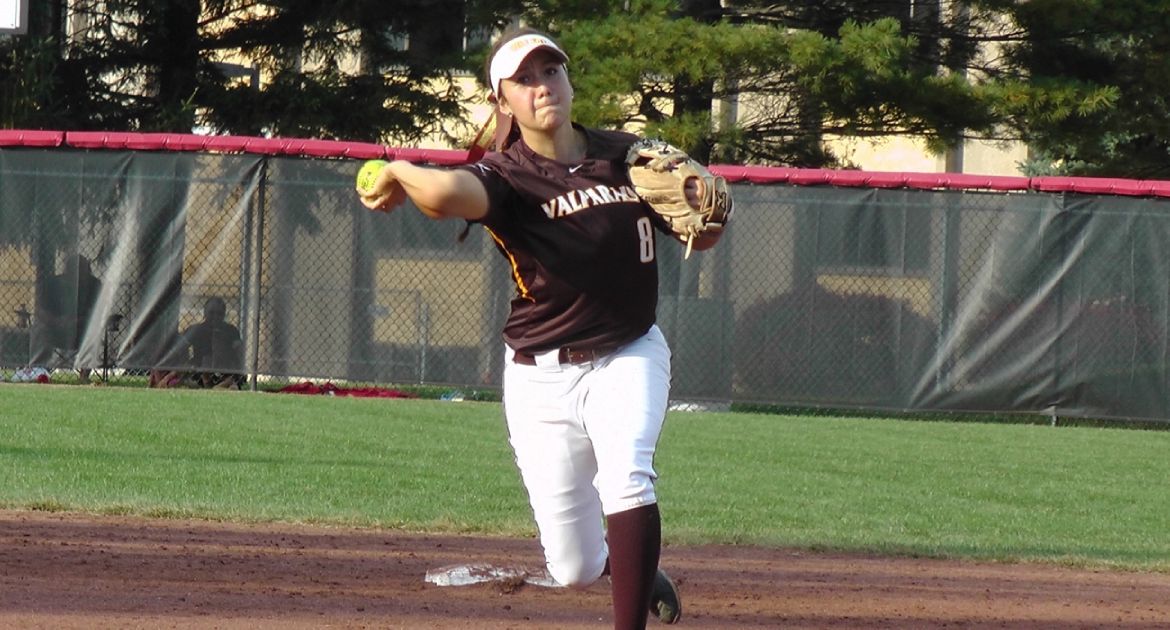 The Valparaiso softball team closed action at the Colorado State Classic in Fort Collins, Colo. on Monday afternoon.  Valpo dropped the resumption of Sunday’s suspended game to the host Rams, 5-4 in nine innings, and then fell to Colorado State 8-3 in the tournament finale.

The Crusaders and Rams entered the ninth inning of the suspended game tied at two runs apiece, but Valpo quickly took the lead.  With freshman Stephanie Moreno (Murrieta, Calif./Murrieta Valley) placed on second with nobody out in the international tiebreak rule, sophomore Taylor Lawson (Tucson, Ariz./Sahuaro) walked and freshman Lanie Callaghan (Elburn, Ill./Kaneland) singled to load the bases with one out.  Fellow rookie Jenna Stauffenberg (Kankakee, Ill./Bishop McNamara) then hit an infield grounder to score Moreno, and Lawson followed her on a Rams error to make it 4-2 Valpo.

Colorado State needed just four pitches to tie the game in its half of the ninth, however, as Jaelyn Manzanares connected on a two-run homer to make it a 4-4 ballgame.  A walk, an error and a single loaded the bases with nobody out for the Rams, and Haley David drove in the game-winning run with an RBI single.

Freshman Ashlyn Montgomery (Lebanon, Ind./Lebanon) took the loss in relief for Valpo after entering with nobody out in the eighth, falling to 1-2 on the year.  Logan Losh earned her first decision of the year for Colorado State (12-12), going the distance in the circle.

The Crusaders took a two-run lead in the finale as well after just one turn at-bat, as junior Kaitlyn Ranieri (Schererville, Ind./Lake Central) connected on a one-out solo homer and senior Lindsey Norway (Chicago, Ill./Chicago Christian) later scored on a CSU error.  But the Rams scored eight unanswered runs before a solo home run by Moreno in the top of the sixth closed out the scoring.

Moreno went 2-for-2 with a sacrifice bunt in the tournament finale to lead the Crusader offense.  Junior Taylor Weissenhofer (Orland Park, Ill./Lockport Township) took the loss and fell to 0-4 on the year, giving up five runs in 3.2 innings of work, while Molly Randle tossed a complete game to pick up the win for Colorado State.

Valparaiso (3-11) heads down to the Rebel Spring Games this weekend in Kissimmee, Fla. to close out its group of trips in the early portion of the season.  The Crusaders open play in Florida against Bucknell and Albany on Friday.